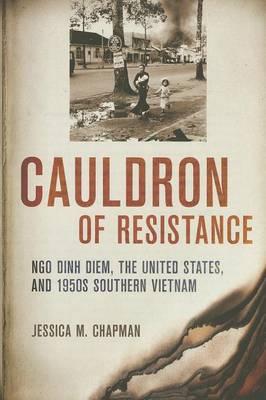 In The Age of Empire, Eric Hobsbawm, reflecting on the canonical break of 1914, notes that those who have approached that year “can be divided into two camps: the forward lookers and the backwards lookers.” One group sees the period from 1875 to 1914 as the end of an era; the other “seeks those roots and anticipations of our time.”(1) If we could expand this observation, it seems clear that many historians, the world over, fall into either forward-looking or backward-looking camps. Jessica Chapman’s book is, overall, forward-looking. It is not deeply concerned with understanding the end of the era of French empire in Asia.

Cauldron of Resistance is a well-written work. Chapman examines the rise of Ng├┤ ─Р├мnh Diс╗Зm, and his consolidation of power, in the mid-1950s. In the process, she argues for the centrality of the Cao ─Р├аi and H├▓a Hс║гo politico-religious organizations and the B├мnh Xuy├кn nationalist outlaws to any understanding of mid-1950s South Vietnam. Chapman is right on target. These organizations were important to southern politics in the 1950s, and marginalizing them from the status of major players simply attests to a Saigon-centric view of that politics. Further, while Chapman’s book focuses on the twists and turns of politics in only one part of Vietnam – the South – she does not shy away from addressing large topics, such as the Cold War and US-South Vietnam relations.

Chapman’s work contrasts with the dominant approach to Vietnam in the mid-1950s. For most Western historians of South Vietnam, the issues in this period are clear: the end of French rule, the controversial ascension of Ng├┤ ─Р├мnh Diс╗Зm (including his crackdown on the Communists) and, last but not least, the deepening ties with the United States. Such accounts pay little attention to the creation of the State of Vietnam in 1949 and its slow accretion of sovereignty. They treat the religious groups and gangsters prominent in the South as minor oddities, good for an exoticizing account of southern Vietnam, but secondary to the “main story. Most recent works regard these groups as minor players. Thus, in his beautifully written history of the First Indochina War, Fredrik Logevall flits over the politico-religious groups, implicitly seeing them as marginal to an understanding of mid-1950s South Vietnam.(2) Ed Miller, in his pathbreaking new work on Ng├┤ ─Р├мnh Diс╗Зm (recently reviewed in this series by Keith Taylor), avoids the bane of exoticizing the politico-religious sects and the B├мnh Xuy├кn, but pays little attention to them.(3)

Chapman implicitly presents the view that, because French power was fading from 1945 to 1954 and American power rising, one does not need to delve into the French in great detail. The end of empire, however, had its complications, and one of the oddities of the First Indochina War was that French influence in the South remained strong up to 1954. (After that point, it began to decline precipitously.) It was a peculiar type of influence. Nevertheless, with the help of the Cao ─Р├аi, H├▓a Hс║гo, B├мnh Xuy├кn, and Unités Mobiles de Défense de la Chrétienté, the French military did essentially defeat the Viс╗Зt Minh in the Mekong delta by 1953, and in the process profoundly shaped rural southern Vietnam’s political landscape.

Reading Chapman, one gets the sense that the French – and earlier Vietnamese governments – left southern Vietnam a mess. Chapman repeatedly characterizes the region as the “wild south” (pp. 13, 14, 15, 32, 38, for instance), a description that indeed fits the South before 1951 or so, but less well after that year. She also refers to the “almost anarchic south” (p .70), calls it a “site of near anarchy” (p. 74), and quotes approvingly Jean Lacouture’s and Philippe Devillers’s description of the South as “a country ruined, cancerous, stunned – a sentence in suspension” (p. 74).(4) Yet such descriptions are problematic. The South had just emerged from a war, but it was clear that by 1953 the countryside was far more peaceful than a few years earlier, and order was returning to the Mekong Delta.

Chapman’s descriptions of “anarchy” conflate two separate realities: one of high politics in Saigon, and the other of everyday politics in the countryside. With the French leaving, high politics was indeed unsettled and rapidly changing. Everyone was gunning for control of the national state apparatus and its finances. But what about the provinces? Far from being anarchic, the South was balkanized into areas under the control of different confessional groups or of the B├мnh Xuy├кn. By 1953, this balkanization had evolved into a somewhat stable system, though one that would have to change as the Saigon government grew in power and tried to impose its will on the countryside.

At times, Chapman characterizes the politico-religious groups with loaded language, as when she refers to the “cunning” (p. 95) of their generals and quotes, apparently approvingly, Joseph Buttinger’s characterization of them as “devious collaborators” (ibid.). Interestingly enough, such descriptions echo the those found in French archives. I would suggest instead that the heads of politico-religious groups were remarkably rational individuals intent on preserving their past gains but also interested in recognition as major political players.

The heart of this book is the story of Diс╗Зm’s rise, defeat of the politico-religious groups and the B├мnh Xuy├кn, and consolidation of power. Ed Miller, in his recent book, has stated that, “during the Indochina War of 1945-1954, Diem was among the most prominent of Vietnam’s attentistes [fence-sitters],” “adopting an uneasy neutrality” in the conflict between the Viс╗Зt Minh and the French.(5) To state this more bluntly, Diс╗Зm did little to defeat the Viс╗Зt Minh. His record contrasts sharply with those of the Cao ─Р├аi, H├▓a Hс║гo, and B├мnh Xuy├кn, each of which took on the Viс╗Зt Minh in the Mekong Delta and elsewhere at great human cost. Is it any surprise that these groups believed that they had a strong claim for political influence in South Vietnam? Despite Diс╗Зm’s signal lack of contribution to fighting the Viс╗Зt Minh, he swooped in as a national political leader, pushing aside these groups. If Chapman had provided more treatment of the actions of Cao ─Р├аi, H├▓a Hс║гo, and B├мnh Xuy├кn in rural areas, and how these actions gave them a significant political base, she would have strengthened her book considerably.

That being said, Chapman provides an excellent account of Diс╗Зm’s rise to power, which coincided with the United States pushing France out of its position of influence. What comes through in this account is American ignorance of the intracies of southern Vietnamese politics as well as Ng├┤ ─Р├мnh Diс╗Зm’s simplistic understanding of the role of that politics in the First Indochina War. Chapman labels the B├мnh Xuy├кn – the conflict with which was one of Ng├┤ ─Р├мnh Diс╗Зm’s first major tests – one of southern Vietnam’s “politico-religious organizations” (p. 4, for example). Diс╗Зm struck first where he was strongest – in Saigon itself – and rooted the B├мnh Xuy├кn out of its control over the Saigon police and gambling rackets. I would emphasize that the B├мnh Xuy├кn was composed of nationalist outlaws, but it was not a politico-religious organization, as Chapman repeatedly implies or states. The Cao ─Р├аi and H├▓a Hс║гo were such organizations. The main factions of these two politico-religious organizations allied with the B├мnh Xuy├кn out of considerations of political realism dating back to 1947 and 1948. The attack on the B├мnh Xuy├кn did little to challenge the power of the Cao ─Р├аi and H├▓a Hс║гo in the provinces, where their bases of support lay.

Indeed, one of the puzzles of Diс╗Зm’s seizure of power is his ability to defeat the H├▓a Hс║гo and Cao ─Р├аi easily. Both groups, which had large rural followings, had repeatedly beaten back the Viс╗Зt Minh in the 1940s and 1950s; they had proven militarily effective. Why, then, did they crumble before a premier with an uncertain power base who often seemed on the verge of being deposed? Chapman provides the probable answer to this question: the fact that Diс╗Зm bribed his opponents (apparently with American-supplied money) and thus divided them. I would have liked to see more on this issue, though it is notably hard to research. The H├▓a Hс║гo, Cao ─Р├аi, and B├мnh Xuy├кn were particularly vulnerable in 1955, as the French had just terminated financial support for their armies. The question remains, however: how could bribery do what the Viс╗Зt Minh could not and defeat these organizations? It would have been valuable for Chapman, eschewing a Saigon-centered narrative, to have dug more deeply into the situation in provincial South Vietnam in search of a sense of how local militias fared when their finances were hit.

Once Diс╗Зm began consolidating control in Saigon and the Mekong Delta, he turned to demonizing the Cao ─Р├аi and H├▓a Hс║гo in 1955 and 1956. Chapman makes a major contribution by delving into this issue and its consequences. Diс╗Зm lumped together the politico-religious groups and the Communists as enemies of government.

Conflating these three groups [of feudalists, colonialists, and Communists], served to justify violent action against any of them as a noble defense of Vietnam’s national integrity . . . Any evidence of collusion he could find would provide useful fodder for propaganda, but even without it he could tar them all with the same brush. In his view, they were all “enemies of the people” because they were all communists or communist sympathizers by definition. (p. 120).

This is excellent analysis. Chapman adds extensive evidence of Diс╗Зm’s crackdowns on all sorts of perceived enemies, in a campaign that temporarily led to peace in the South but that did not resolve the fundamental problems with Diс╗Зm’s rule.

I have a great deal of appreciation for this work, which emphasizes what so often is seen as a minor story in 1950s South Vietnam. For the story of the confessional groups like the Cao ─Р├аi and H├▓a Hс║гo and of the B├мnh Xuy├кn was certainly not minor, or marginal to an understanding of the South and in particular of the Mekong delta. It is remarkable in a way that Diс╗Зm, who had done so little to fight the Communists during the First Indochina War compared to the H├▓a Hс║гo and Cao ─Р├аi, was able to turn around and cast those latter groups as alleged Communist sympathizers. The majority of their factions had been implacably opposed to the Communist-led Viс╗Зt Minh during the First Indochina War. In associating the Cao ─Р├аi and H├▓a Hс║гo with the Communists, Diс╗Зm demonstrated an ability to to engage in unprincipled gutter politics with the best of them.

At the same time, Cauldron of Resistance suggests the limits of understanding South Vietnam through a Saigon lens, which is what Chapman mostly does. The Cao ─Р├аi, H├▓a Hс║гo, B├мnh Xuy├кn, and other groups had played key roles in rural southern Vietnam since 1945. The idea that they would just fade away, and that Diс╗Зm’s victory in Saigon would translate into victory in the provinces and into rural support for his government, was a chimera. Examining this provincial story more intensively would have added complexity and depth to Chapman’s account. In the end, after all, Diс╗Зm would be overthrown, but the Cao ─Р├аi and H├▓a Hс║гo would still play important roles in southern society. They are with us today. Despite her lack of attention to the dynamics of rural politics, Chapman has nevertheless written an excellent work, one that helps us reframe our understanding southern Vietnam during the 1950s.

Shawn McHale is Associate Professor of History and International Affairs at the George Washington University.

2. Fredrik Logevall, Embers of War: The Fall of an Empire and the Making of America’s Vietnam (New York: Random House, 2012).

4. Actually, Devillers and Lacouture (in La Fin d’une Guerre: Indochine 1954, Paris 1960) were talking about Vietnam as a whole, not just South Vietnam. And Chapman has translated the quotation in question enigmatically; the last phrase would better read “a convicted person whose sentence has been suspended” or “a condemned person given a reprieve.”