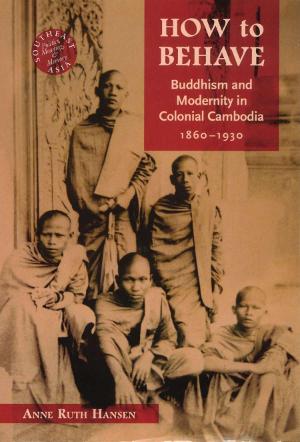 Long in the doldrums because of civil war in Cambodia, the Khmer Rouge regime and the Vietnamese occupation, studies of modern Cambodian history are now booming. This excellent volume in intellectual and cultural history by Anne Hansen, an American scholar proficient in Khmer, Pali and French, takes a prominent place on the shelf along with a host of other recent books on Cambodia, many of them about religion. Beautifully crafted, patient in its exposition and resolute in its argument, the book explores the adjustments Khmer religious thinkers made to the political and social changes that were taking place around them as a result of French colonial rule.

Hansen begins her story by interpreting the Khmer religious imagination through vernacular versions of the Vessantara Jataka, the last birth story of the Buddha; the Buddhist cosmology, known in Laos, Cambodia and Thailand as the Traibh┼лm or Three Worlds Cosmology; and the life of the Buddha. One particular rendition of the Buddha’s life came in the form of an epic poem, composed in Khmer verse possibly in the 1880s or 1890s by Ukñ─Б Suttantapr─лj─Б Ind, a vivid example of the vernacularisation of the Buddha’s sacred biography. These texts were the basis of the Khmer Buddhist world view. Moral action gives meaning and order to the universe, and the law of kamma determines individual identity. The link between kingship and Buddhism was intimate, but the worldly power of kings was hedged with limitations and had to defer to the superior path of the Buddha’s renunciation. The scholars whom the culture held responsible for perpetuating the Khmer Buddhist world-view became the agents for re-examining it, reconfiguring it and composing new works so that it made sense in the emerging social and political landscape.

Almost immediately the colonial subjects reacted, initially in the millenarian rebellions described in the second chapter which signalled dissatisfaction with the new conditions and conveyed a longing for idealized conceptions of meaning and order. Hansen tells us that a common metaphor for explaining dukkha or suffering is something like ‘out of joint’, as in a dislocated shoulder. The millenarianism of the nineteenth century spoke to the acute dislocations that colonialism visited on many Cambodians. The rebellions were soon followed by social critiques, such as those written by Prince Yokanthor in 1900 and Ukñ─Б Suttantapr─лj─Б Ind in 1914-1921. These intellectuals attacked French reforms and their effects: the introduction of land ownership; revenue-raising through the sale of opium; and the abolition of hereditary and indentured slavery. These measures conflicted with Buddhist moral values.

Ironically, the ongoing efforts to come to terms with the colonial condition proceeded with French patronage through the establishment of the Buddhist Institute, the Royal Library, and the S─Бl─Б Pali, a process summed up by Hansen as colonial collusion. Early in the twentieth century French civil servants and French-educated Khmer ministers joined together in the Council on the Improvement of Native Education which aimed to demythologise Buddhism and reconstruct it as a ‘rational’ religion, a decidedly European project. French scholarship, such as Finot’s 1925-26 work on the evolution of Buddhism, presented the religion in a historic, scientific and academic way in order to ‘modernise’ it away from the discourses of power and invulnerability that lay behind the millenarian revolts of the previous century and caused such apprehension in the French administration. Other key figures here are the French Indologist George Coedès and the less well-known Suzanne Karpelès, who had trained under Finot and worked in Hanoi and at the Vajirañ─Бna Library in Bangkok before coming to Cambodia. It was she who in 1930 founded and nourished the Buddhist Institute in its early years and encouraged productive links between Khmer Buddhist scholars and nationalists.

The author of the Khmer epic verse on the Buddha’s life, Ukñ─Б Suttantapr─лj─Б Ind, also wrote the Gatilok (‘ways of behaving in the world’), a manual of Buddhist behaviour, held up in chapter five as a key text in understanding Khmer Buddhist modernism. Drawing on symbols and imagery from a variety of Pali texts, the Gatilok emphasised for ordinary, literate Khmer the importance of purification of conduct and ‘knowing how to analyse correctly’ in order to deal with problems of everyday life. In arriving at these perspectives, which involved a kind of fundamentalism in the return to Vinaya and other foundation texts, Khmer monks availed themselves of Buddhist scholasticism in Siam, where sovereignty had been compromised by the Western imperial powers but ultimately left intact, and where a vibrant Buddhist literary culture inspired Khmer religious thinkers. Journeys to Bangkok, such as that undertaken by the monk M─Бs-Kuс╣Е in 1892, were very dangerous and could take a month, but so many monk-scholars took the arduous trip that the French colonial authorities suspected their activities were political. The story of Khmer religious modernism cannot be told without reference to the Dhammayut order in Siam, founded in the middle of the nineteenth century by the future King Mongkut. Even the controversy about wearing the saffron robe, which deeply divided the Siamese Sangha, became an issue in Cambodia. How to Behave thus makes a significant contribution to regional – in contrast to only national – perspectives on mainland Theravada Buddhism over the period, a project in which other religious historians such as Justin McDaniel and Daniel Veidlinger have been recently engaged.

In conclusion, I am not so sure about ‘the modern Buddhist’ that looms large in this account, a figure omnipresent in Western as well as vernacular writing on nineteenth-century mainland Buddhism. The debates and writings of the Khmer Buddhist scholars represent only one strand of Buddhist practice in Cambodia, and an urban, highly educated and cosmopolitan one at that. In the wake of the anti-colonial rebellions in the nineteenth century whose leaders were protected by rituals and amulets, the French authorities came to fear these leaders because of their practices to acquire power and invulnerability. Yet it is not at all clear from How to Behave what happened to these ‘deeply entrenched traditions of spirit and meditation practices’ over time. ‘The modern Buddhist thinker’ that emerges from this fine study is in the end only part of the story of what happens to Buddhism. Religious scholars have not quite figured out how to write the history of mainland Theravada Buddhism without privileging this strand of Buddhist practice as progressive, defining it as the vector of the future, and thereby classifying other Buddhist practice as unmodern or even anti-modern.