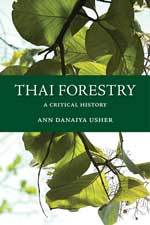 Forestry in Thailand has always been about more than tree management. The country’s Royal Forestry Department (krom pa mai, RFD), established in 1896, dates to a time of great political and social change in Siam. Its creation reflected Siam’s need to demonstrate to European powers (and to European logging companies) its ability to provide bureaucratic order. Not coincidentally, the department’s first head was a British forestry officer. In addition, as Ann Danaiya Usher argues in Thai Forestry: A Critical History, “King Chulalongkorn needed to boost the treasury’s income to finance widespread reforms in the country” (p. 57), and he could achieve this end in part through RFD oversight of logging operations within Siam’s borders. State control of forests also helped Bangkok increase its mandate for governance. By the 1980s the RFD’s administrative control of forest areas extended (on paper at least) to “almost half the surface area of the country” (p. 5). The importance of Thailand’s forestry sector to the history of its economy and society makes it unfortunate that so little has been written about that sector until recently.

In the Introduction to Thai Forestry, Usher writes that the book explores the “thinking behind Thai state forestry” (p. 1). Her claim is somewhat misleading: what follows that introduction are four sections which mix historical analysis of the origins of forestry and of forestry-related knowledge in Thailand with social commentary. The book culminates in a vision for a new approach to Thai resource management, with community forestry leading the way. In the end, it remains unclear whether the more important goal of the book is to provide an historical analysis of Thai forestry or to criticize the RFD and lobby for community forestry.

Part I of Thai Forestry, “Watersheds of Thai Forestry History”, examines six controversial and landmark events in during the late 1980s and early 1990s. The first three of these events are the shelving of the Nam Chon hydro-electric project in 1988, in response to public pressure; the build-up to the 1989 general logging ban; and the Huai Kaeo community’s successful fight for state recognition of its 1600-rai (approximately 640-acre) community forest. That recognition was granted on 18 December 1989. The fourth of Usher’s landmark events is the widely publicized “Suan Kitti Scandal” of 1990. This scandal resulted in a reduction (from 2000 to 50 rai) in the maximum size of holdings of state land that could be leased for tree plantations. The final pair of landmark events that Usher treats in Part I include the revival in the 1990s of the Khor Jor Kor land resettlement program, finally abandoned in 1992 after wide-spread protest, and the public sadness that followed the 1990 suicide of the chief of the Huai Kha Khaeng Wildlife Sanctuary, Sueb Nakhasathien – “an honest forester struggling against the corruption within his own department” (p. 38). Usher argues that “each of the conflicts between the bureaucracy and the public contributed to the gradual erosion of the forestry establishment’s legitimacy that continues to this day” (p. 8). Written in a journalistic style (Usher first covered the stories during her work for The Nation), Part I sets the stage for Usher’s depiction of Thailand’s natural environment as an arena in which an oppressive state agency and a victimized public clash.

Parts II and III most convincingly live up to the book’s aspiration to treat the “thinking behind Thai state forestry”. In Part II, Usher analyses German scientific forestry, the influence of the British forester Herbert Slade on the RFD, early RFD strategies to maximize teak extraction, and, finally, “the four failures of Thai forestry”. She argues that Thai forestry has failed “(1) to limit commercial timber harvesting to a ‘sustainable’ level, (2) to stem corruption and illegal logging, (3) to establish tree plantations that could produce timber to replace logging from natural forests, and (4) to maintain its monopoly over forest land – that is, to keep people out of forests” (p. 74). Part III of Thai Forestry covers the rise of plantation forestry in Thailand. It examines first teak and then eucalyptus. Historical analysis here focuses on Danish and Finnish influences.

Part IV of the volume considers the American roots of the national-park and wildlife sanctuary model, which plays an important role in the management of Thai forests today. In this section Usher argues that the models that Thailand adopted are “from today’s vantage point relics of the Cold War, militaristic in spirit and, being based closely on the American conservation model, inherently elitist and even racist” (p. 163).

The book concludes with Usher’s vision for the reinvention of Thai forestry, a reinvention that will give local people a larger legal role in conserving the forests on which they depend. Usher’s commentary throughout the book, but in particular in this short section, diverts attention from her useful historical analysis. In numerous passages she extols the merits of the Community Forestry Bill (CFB). This praise seems at odds with the book’s aspiration to offer “a critical history” of Thai forestry. While the CFB certainly merits analysis – it has been at the forefront of Thai environmental debates for two decades or more – Usher’s treatment is ideologically rather than historically driven. Too, while Usher discusses the landmark moment of the CFB’s enactment on 21 November 2007, she also notes a pending constitutional challenge to the bill mounted by concerned NGOs. This reviewer’s understanding is that the Constitutional Court voided the CFB in November 2008 on the grounds that the National Legislative Assembly did not have a quorum on the day of the vote to approve the bill.

Thai Forestry neglects several important dimensions of the forestry sector’s history. It offers only cursory discussion of the significantly changed roles of the RFD and the National Park, Wildlife, and Plant Conservation Department since the 2002 reorganization under the newly created Ministry of Natural Resources and Environment. Instead, Usher seems intent on lumping foresters together as a singular beast: in part a creature of outdated science and oppressive policy, and in part uncompromising government officialdom. She offers no analysis of land tenure rights or of agriculture in protected areas; each has been a central contextual issue of major historical influence on the framing and implementation of forestry policy in Thailand.

Limitations in its scope notwithstanding, Thai Forestry adds to the existing literature on this significant sector by synthesizing a considerable body of material on several important matters. In its attention to local developments, it complements the macro-history of Thai forestry in Pasuk and Baker, Thailand: Economy and Politics, and Oliver Pye’s study of the controversial Khor Jor Kor state forestry project. At a broader level the book contributes to a larger historical narrative of the European roots of forestry and of forestry-related knowledge in Southeast Asia. The Thai case fits into the regional history of colonial influence on forestry, particularly with regard to teak extraction and “scientific forestry” practice. The country’s adoption of Burmese forestry laws exemplifies that link. However, as a critical history of state forestry, Thai Forestry falls far short of the exceptional standard set by Raymond Byant’s history of Burmese forestry. At a more abstract level, too, Vandergeest and Peluso have argued persuasively that Thai efforts to develop professional forestry have made for an experience that shares much with that of other countries in Southeast Asia but has important unique features. Thailand has had its own brand of what Vandergeest and Peluso term “political forests”; these have had much influence on the level of success of its policy regime. The Thai chapter in a comparative study of the shared history of Southeast Asian forestry awaits further work. Studies such as Usher’s–with its exploration of the historical motivations behind Thai forestry–are crucial to advancing the project.

Department of Political and Social Change