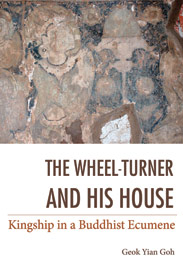 Much like Burmese history itself, the story of a great Burmese king has not always been what it seems. King Anawrahta, 1014-1077 AD, is one of the great figures of Burmese history. There is surprisingly little contemporaneous evidence for him or for what he did during the eleventh century, when he reigned in Pagan. Today we all know Anawrahta was a great king, a culture hero and religious reformer who brought orthodox Buddhism – what would today be called orthodox Therav─Бda Buddhism – with it, much of Burmese culture, to Pagan.[i] Together with Alaung Hpaya and Bayint Naung, Anawrahta is one of the great kings whose statues grace Nepyidaw, the new Burmese capital, and the places along the Thai-Burma border.

But it turns out that we know all this through much later sources, mostly manuscripts. While Goh considers recently-discovered votive tablets and inscriptions, she focusses [sic] her attention on texts, which forms the bulk of evidence for Anawrahta. One of the earliest written mentions of Anawrahta comes not from a Burmese-language manuscript at all, but from a P─Бli manuscript from Lanna-Chiang Mai, the Jinak─Бlam─Бl─л, completed in 1527. However, the oldest extant manuscript of the text comes from 1788.

Goh wants to understand what is going: was Anawrahta created out of almost nothing, given that there are such short, sparse references in the earliest sources? How did he come to be such an important figure in Burmese historiography today? Working with textual sources dating from the past three centuries in Burmese, Chinese, and English translations, Goh traces the unfolding of the story of king Anawrahta. She finds that the amount of space given in individual “chronicles” – state-sponsored official pre-colonial histories or y─Бzawin in Burmese – to Anawrahta has varied. He is first depicted as a figure related to religion, but during the twentieth century he emerges as a great military and cultural hero.

A central theme Goh develops is how pre-colonial Burmese historians saw Anawrahta as an embodiment of a cakravartin (or P─Бli cakkavatti), the universal ruler and conqueror, but also world-renouncer long famous to the work of mainland Southeast Asian historians and anthropologists. Hence the slightly obfuscating title of Goh’s book: “wheel-turner” is an English rendering of the P─Бli term.

A second theme Goh develops in her analysis the idea of the Buddhist ecumene. This is Goh’s term, which builds on a recent body of work such as Sheldon Pollock’s idea of a Sanskrit cosmopolis, or Ronit Ricci’s work on the circulation of Arab-language texts between the Middle East, South, and Southeast Asia. This term is the source of the subtitle of the book: And His House refers to Goh’s English rendering of the term ecumene, strictly speaking, “the inhabited world,” but which includes ╬┐с╝░╬║╬┐╧В (oikos), Greek for “house.”

Goh argues that pre-colonial writers of Burmese history came to understand themselves as part of a larger network of Buddhist exchange which included Laс╣Еk─Б, upper and lower Burma, and Lanna (now Northern Thailand). It was Anawrahta who established Pagan (and by later extension, Burma) in that ecumene through the Sack of Thaton in 1057 AD. He had wanted to purify the religious practices at Pagan, which were marred, as later texts describe, by unorthodoxy. He asked King Manuha of Thaton for copies of the piс╣нaka ┬н– the canons of Buddhist scriptures – crucial to his program. Manuha refused rudely. Anawrahta, in anger, attacked Thaton, carrying away not only the holy texts, but the king, his court, and artisans. Hence the depiction of Anawrahta as the embodiment of the cakkavatti, even if one with the human flaw of anger.

Colonial historians saw Pagan as the origin of the modern Burmese state, a fact that, by extension, means that a figure like Anawrahta has become a founder of the modern nation state. Goh traces how Anawrahta’s historical role grew ever larger by looking through twentieth-century Burmese language materials, including school textbooks, popular novels, and movies. She finds Anawrahta looming large as a hero and in nationalist imaginings of the past and in the lineage of the modern nation-state.

Goh has made contributions to the study of Burmese history and, by extension, Burma Studies more widely. Unlike many contemporary Burma historians working in English, Goh is a solid Southeast Asianist who has brought scholarship from other parts of the region to bear on the situation in Burma. Finding parallels between historical texts in Java and Burma helps the reader see that Burma has always been part of a much larger sphere, not just the world of India and Sri Laс╣Еk─Б to which many recent scholars rooted in Buddhist Studies have connected the country. Nor is her scholarship partitioned off only into “history.” In Part Two, her discussion of manuscript culture and textual transmission, Goh quite usefully brings work on oral history and literacy to her discussion of the situation in pre-colonial Burma. Some of this work, such as that of Walter Ong, has been around since the 1980s, yet few have thought to think of Burmese manuscript culture as being part of traditions of recitation, or considered aspects of texts that were not transmitted solely by writing. Goh points out that in earlier centuries, closer to Anawrahta’s time, textual evidence for him simply does not exist. Here she looks for clues in the archaeological and art historical record.

The Wheel-Turner and His House is probably not for the general reader. Throughout the work, Goh is engaged in a professional conversation with other Burma historians such as Victor Lieberman, Michael Aung-Thwin and Michael Charney. Her interest and her approach reflect intersections with the work of these scholars. Readers interested in the intersections of history and nationalism, or how a modern Southeast Asian state reacts to its colonial past, will find Part Three particularly interesting and useful. In Chapter Six, “The king as hero: memory and history in modern Burma,” Goh raises the problem of memory as an element of historical analysis. This is one theme that could have been developed more strongly, especially as she seems to be arguing that, if anything, much of what we “know” about Anawrahta has been embroidered and filled in during more recent centuries.

Goh and NIU Press were able to provide passages in Burmese using the Burmese script. Their inclusion, however, is not unproblematic. Some readers may find that it is not always clear why so many lengthy passages have been included, and may wish that the author herself had provided her own readings of their significance. Goh has relied on modern editions of the texts from which she has provided quotes. My intention is not to criticize Goh for not using more “authentic” texts. Rather, as she herself points out, it is not always clear when, where, and what twentieth-century editors have changed. While English-like changes in punctuation are clear, what is less clear is when the editors have incorporated their own comments into the body of texts. But perhaps this is just part of the same process of updating and “improving” texts that has been a constant throughout Burmese manuscript culture, and indeed is central, as Goh argues, to how Anawrahta has come to be the figure he is today.

Patrick McCormick is a representative of the ├Йcole fran├зaise d’Extr├кme-Orient in Yangon and also holds an appointment in the Department of Comparative Linguistics at University of Z├╝rich.

[i] Some recent scholarship has argued that while there have always been differences in practice within Buddhism, the division into the schools of Mahayana and Theravada is quite recent. The work of western and Japanese scholars starting in the latter nineteenth century made a clear division between the schools and gave them the names they are now known by. See Peter Skilling and Jason Carbine, et al, eds. How Theravada is Theravada? Exploring Buddhist Identities. Seattle: University of Washington Press, 2012.

* Since the publication of this review, Dr. McCormick has requested that we include a new second paragraph. The review has been so amended. -BCD