Can our cities survive climate catastrophe? Ancient Asia may hold the key

If you, like the majority of the world’s population, live in a city, you are particularly vulnerable to climate change. The 21st Century is not the first time humans have faced climate change and the challenges it poses. The archaeological record is filled with examples of how past societies and cultures that have survived climate change, as well as those that did not. But, while there is much talk of futuristic sci-fi solutions to climate change, there is no talk of the past.

Climate played a key role in the political and population collapse of many of the largest cities of the preindustrial world: cities such as Angkor in Cambodia, Anuradhapura in Sri Lanka, and Tikal, the great city of the Mayan lowlands in modern Guatemala.

Large cities are often resilient to sporadic  climate disruption such as extreme weather. Research by archaeologists at the University of Sydney has found that ancient Angkor survived several climate shifts. After irregular monsoons, thousands of kilometres of canals and water tanks – equivalent in size of medieval London – were built to protect the mega-city’s water and food supply. While costly, the huge infrastructure enabled Angkor to grow into the most extensive urban city of the pre-industrial world, 60 kilometres across, a similar size to greater Sydney or Melbourne. 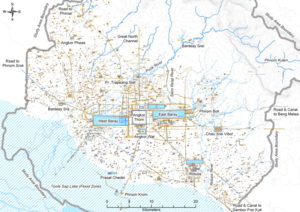 However, when faced with major and intense climate change, large cities are far less resilient.

In ancient cities such as Angkor, there was a cost benefit trade off to make the city habitable. The tipping point came when the cost of repairing or maintaining the city and its infrastructure outstripped the society’s capacity or desire to pay for its upkeep. The consequence was the failure of the agricultural system that, along with trade, had sustained a population of over a million people.

In Angkor, the disastrous sequence of events was years of drought followed by a catastrophic monsoon. The drought left huge water tanks and canals in bad repair. Unable to cope with the deluge, they became filled with debris and silt. The fields that supplied the city with rice – its source of nutrition and also its key trade product – were rendered useless and the city was almost completely abandoned.

Two factors make collapses such as that which occurred in Angkor particularly disturbing. First, the collapse was sudden and rapid, with abandonment, or at least population decline, of cities taking place within a few decades. Second, when large, sprawling, resource-hungry cities collapse, they take their entire economic and political system with them, despite the society’s implementation of ‘tech fixes’, like water infrastructure.

Why should we be worried? Well, much like the abandoned cities of Angkor, Anuradhapura in Sri Lanka and Tikal in Guatemala, our cities are becoming huge sprawling entities, eating up the surrounding landscape. Like cities of the past, modern urban centres such as Jakarta, Bangkok, Sydney, Shanghai and London are increasingly interconnected, dependent on the life blood of international trade to generate wealth and continual growth whilst also meeting the ever-growing costs of mitigating climate change. These factors make us vulnerable in the same way as the ancient cities of the past were. Pressure on infrastructure and liveable space from growing populations, decreased food security and trade activity due to erratic weather patterns, and inundation of coastal cities by rising sea levels or damaged by natural disasters could, in a worst-case scenario, result in similar outcomes: abandonment. 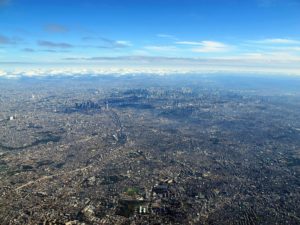 An aerial photo of Tokyo (goo.gl/UY47FG)

In the modern world the effects of climate change are already beginning to play out. For example earlier in this decade, crop failures and a chronic global wheat shortage led to increased food costs in the Middle East, which played a significant role in disrupting the established social order during the Arab Spring.

But the past also offers some hope. Although Angkor, the most extensive agricultural city of the pre-modern, collapsed, small settlements like towns and villages survived. Out of these developed more compact cities like Phnom Penh.

Why compact towns and villages survive environmental catastrophe is an important and unfolding area of research. Archaeologists argue that smaller communities require less resources and can be more self-sufficient. Smaller communities surviving on diverse localised economies are also more insulated against global trade breakdowns. The implication is that more interlinked networks reliant on a limited number of resources are more unstable.

It is possible that our industrial technologies may save our cities and mitigate climate catastrophe. However even with modern technologies, there is a financial and resource threshold at which we can no longer repair and maintain our ever-growing giant cities.

Despite the disruptive and even violent impact of past climate change events, city abandonment should not be understood as a total apocalypse, or the end of cultures. In the case of Angkor, Anuradhapura and Tikal, the population responded to catastrophic climate change by moving into smaller villages at the fringe of their urban world: places that would eventually become modern cities like Phnom Penn, away from the collapsed urban core.

Large cities collapse when faced with enough pressure from a changing climate, yet small cities survive. Archaeology tells us that it is now that we should be preparing our cities and their communities for the kinds of catastrophes humanity has experienced in the past. Compact cities and large self-sufficient towns could be the future. A historical perspective tells us that at the urban fringes of our big cities, where new suburbs are eating up the remaining natural and agricultural landscape, we are already building our past. 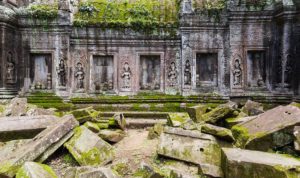 Perspectives on the Past New Mandala is currently accepting submissions. If you have are writing great content and have a perspective on the past in Southeast Asia send your article/pitch to [email protected] for consideration.