The church and peacebuilding in Chin State This post is based on the author’s paper presented at the Australian National University’s 2017 Myanmar Update.

Myanmar’s Christian-majority Chin State is the poorest state in the country, with a poverty rate of 73%. A history of political violence following the 1988 uprising and subsequent armed rebellion between the government and the Chin National Army (CNA) has severely disrupted economic growth, contributing to widespread poverty in the area.

Years of conflict have prevented efficient government institutions from developing. The conflict disrupted the economic growth of Chin communities, and led to violations of their basic human rights. As a result, international funds and organisations were restricted in practice from the roles that could have bolstered civil society. As a consequence of weak and poorly funded government institutions, civil society organisations (CSOs) have assumed a great deal of responsibility for social welfare services and social protection of vulnerable groups in Chin State. Consequently, church-related CSOs have assumed a great amount of responsibility for social protection. These organisations are mainly connected to the churches—the majority to the Baptist Church—but also some to the Roman Catholic Church and a number of minor denominations. Many such CSOs link to ethnic armed groups directly or indirectly. This environment is strongest in Chin State, where the Baptist Church is predominant.

As my research on the ground has shown, Chin State’s churches have grown crucially intertwined with the processes of peacebuilding. Churches have grown to become a common platform for legal and financial information. Seminars, workshops, and training are basic initiatives of the church on a regular basis. Moreover, the church drives local participation on particular projects such as social services, economic development, and cultural development, which are significant to the democratic political transformation in Myanmar. For instance, the church usually organises public consultations in order to lobby the government in decision making processes.

The church and affiliated organisations also have a significant role in brokering peace in Myanmar. Although the CNA is financially poor, it is rich in human resources, including personnel who are highly educated. It thus makes a strong contribution to the overall ethnic political movement. As Kachin, Karen, and Chin rebel groups are mostly from Christian backgrounds, and most of the political leaders of these groups are Christian, the Church may exercise some influence over them. As Dr Hla Aung, Secretary General of the Global Chin Christian Fellowship outlines:

“Being Christian, they are naturally open to and tolerant of the Christian worldview and teaching. Whereas Christian teachings to live in peace with neighbours is morally binding for the ethnic Christian leaders, the divine command to do justice, recognising and respecting people’s rights and dignity also has a powerful bearing on their political outlook and ideology. These two aspects of Christian teaching underpin the political understanding and movement, especially of ethnic political leaders.”

As political and economic conditions worsened under military rule, church leaders took action to ameliorate the situation. The Reconciliation and Tranquillity Committee, now known as Chin Peace and Tranquillity Committee (CPTC), was founded on 23 July 1996 by 46 church leaders from the Hakha and Than Tlang townships. The meeting, which took place at Hakha Baptist Association (HBA), endorsed three main objectives for the birth of peace and democracy in Myanmar. These were to work for peacebuilding in Chin State, to build peace by brokering as a mediator between Chin National Force (CNF) and the government, and to instigate political dialogue between the CNF and the government.

The success of these effects can be felt through the years. The first ever summit between the CNF and military government occurred at the border of Myanmar and Mizoram in March 2007, after negotiating through the Church as a broker for peacebuilding. After the political shift from the military government to “disciplined democracy”, the new Thein Sein government called for peace talks in 2011. Churches (lead by CPTC) lobbied for the CNF and government to meet each other, and hosted peace talks between them three times in 2012. The three consecutive assemblies came up with 51 agreement points in total. CNF signed the Union level Ceasefire Agreement in November 2012, after the coordination of CTPC to seek democracy in Myanmar. Both sides of the CNF and the government agreed to have the CPTC work as part of the ceasefire monitoring program.

The role of the Church in peacebuilding is not over yet. It is ongoing and crucial. It is even more significant for the current peace process because the church provides a social platform for both sides. Ethnic armed groups need to meet with the people to seek public opinion, and it is the church institution that provides the spaces for such meetings. Mostly, church leaders and church institutions conduct workshops, seminars, and forums on peace and democracy, in order to widely disseminate democratic ideas among the ordinary people and to foster peace and democracy in the country through conscious participation and commitment by the public. Even the most recent Chin national level dialogue on the substance of the “seven road map” of the Nationwide Ceasefire Agreement, for instance, was hosted by the Church institutions in Than Tlang town. 652 leaders attended the dialogue to discuss the Chins’ politics, economy, and land and environment issues to submit at the Union Peace Conference/21st Century Panglong Conference.

It is clear the church sees political reform and peacebuilding processes as part of its concern. The church played a key brokerage role for the current political transformation to democracy in Myanmar. Local people are consulted and involved in peacebuilding processes in many forms. Leaders from Chin armed groups are Christian, therefore church leaders have legitimacy in the public’s eyes. At the same time, the churches are the main places where political leaders can hold public consultation in Chin state. The role of the church to current political conditions, and coming processes of peacebuilding in Chin state, will be significant as long as people there are influenced by their religion. 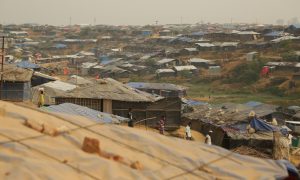 Scholars are meant to understand and explain the roots of atrocities. But do situations like that of the Rohingya demand that they do more? 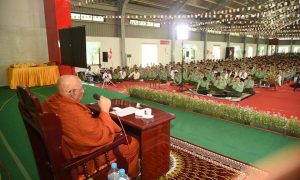