The recent announcement that Future Forward Party members voted to expel four of their their own elected MPs—Kawinnart Takee, Thanapat Kittiwongsa, Srinuan Boonlue and Jaroek Srion—is yet another setback for the beleaguered new party. Earlier in October, Nipon Jamjamras, a former electoral candidate for Chonburi, led a team of 120 party members (some of whom were also former MP candidates) to cancel their lifetime party memberships. And with over two dozen legal cases against the party, Future Forward is facing the real possibility of party dissolution.

Having risen to national prominence following its surprising electoral success in March 2019, Future Forward’s popularity has skyrocketed alongside a mounting number of challenges, largely posed by external forces. But the internal challenges—discontent and defection—are also fascinating to observe. Future Forward did not plan to win this big so soon. Much like most new parties who enjoy success too early, Future Forward’s organisational foundations remain fragile.

More worryingly its “futurista” party identity remains a goal, not yet a reality. In my interviews with Future Forward MP candidates and their staffers, including the four recently expelled, they claim party loyalty and strong conviction in the party’s ideology has been tenuous for some from the start. When the party was officially registered and began to accept potential candidates in October 2018, the rigorous process of candidate selection (which existed in theory) was often not applied due to a lack of candidates in many constituencies.

Very few candidates actually call themselves “true believers” in the Future Forward ideology. They believed in “change” and doing away with old politics and appreciated the openness of the party which welcomed new people. Abdulkudus Samusor, who manages Future Forward Party Pattani, said, “Some people joined Future Forward Party [in the deep south] because of ideology, but others joined because there was no space for them in other parties. It was because of the lack of political opportunity in other parties that they found themselves at Future Forward.” Similarly, another MP from Chacheongsao admitted he was “not at all left-wing” but decided to run for Future Forward because it was the only party that would accept young people.

Meanwhile Kawinnart Takee, a Future Forward MP from Pattaya who was recently booted out for voting against the party on several occasions, is a self-professed yellow shirt. “I used to be a hardcore yellow shirt. I attended almost every protest since 2005. During the military government, I had a change of heart, but even then I am still yellow-leaning.” For a conservative royalist like Kawinnart, ties to Future Forward Party as an institution might have been weak from the start. As she received the shocking news of her forced exit from the party, she stood her ground that her voting choices had been determined by her constituents, not her party. Her commitment to the people overrides her loyalty to Future Forward Party, she argued.

Jareok Srion, a Chantaburi MP who was among the recently expelled, is a red-shirt and a former Pheu Thai member. “I had a plan for the past 6 years to be an MP. It doesn’t matter for what party. I looked around at different options and settled on Future Forward even though it was not my first choice.”

For the 30 unelected candidates among the 120 Future Forward members who defected, party loyalty does not come for free. The main reason for their defection was that they were not given positions in the party as promised. “We were told following the election that we would be given roles as secretaries or advisors, but this promise was clearly broken,” explained Nipon. 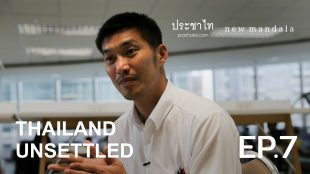 Party loyalty takes time to cultivate so it’s not abnormal for new parties like Future Forward to lose support from former candidates. After all, Thai politicians are notorious for switching parties when convenient, as evidenced by the number of political parties that have been “absorbed” by the military proxy party Phalang Pracharat.

But the very future of the party is currently at stake. Questions remain over what it would mean to be a Futurista without Future Forward Party itself. The party’s biggest asset is its grassroots support. The flash mob that took place in Bangkok on 14 December in response to the Election Commission’s recommendation to the Constitutional Court that it dissolve the party may have been small in size. But the rally was potentially unlawful and demonstrated the extent to which hardcore Future Forward supporters are willing to their show their support.

The party needs to strengthen this commitment to the idea of Future Forward and the broader opposition movement that it represents while it sorts out its internal problems. For this movement will be essential to ensuring the survival of Future Forward’s ideas if the party no longer exists.