While these developments are alarming, we also would like to draw attention to another way in which social media was used in the 2019 midterm elections. Despite the rise of disinformation innovations, it is also important to recognise the democratic potential of social media as a space for authentic grassroots mobilisation.

Another look at Mindanao

Early this year, we conducted the Mindanao leg of our research in Lanao del Norte and Lanao del Sur. Polling data consistently shows that President Duterte enjoys the highest popularity rating in Mindanao. It is only fitting to critically examine the peculiarities of digital campaign strategies in the region where Duterte comes from.

Consistent with the findings of our study, we found disinformation tactics have taken root in campaign operations in Mindanao. For example, shortly before the elections, DDS News – CDO, a page based in Cagayan de Oro, posted a fake Commission on Elections resolution disqualifying Oscar Moreno as a candidate for mayor in Cagayan de Oro City. This year, Moreno won a landslide victory against Jose Gabriel ‘Pompee’ La Viña, Duterte’s social media campaign director back in the 2016 presidential elections.. Candidates also hired ‘keyboard warriors’ in Mindanao to combat fake news against them, as well as to maintain fan pages that produce positive campaign materials.

But concerted disinformation campaigns are not the full story. We have also monitored closed Facebook groups that “organic” and sincere in their expressions of support for the President and his candidates.

Take the case of closed groups like Iligan Pulse and Lambo Iligan, which were created to provide news to Iligan residents. The group administrator of Iligan Pulse told us that the group was created in the aftermath of Typhoon Washi (local name: Sendong) in 2011 to provide information to Iligan residents regarding relief and other forms of assistance. In succeeding years, the administrator opened the platform for discussion and expressions of frustrations about local politics and governance. The group currently has 139,256 members. 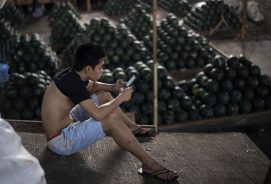 Similarly, Lambo Iligan (lambo is the Bisaya word for progress) is a closed group with more than 38,300 members. The page was originally created and managed by volunteers frustrated with local officials from the previous administration. Today, the page is dedicated to sharing plans and projects of the incumbent local chief executive, who they consider to be an ally. Administrators are clear in stating that their efforts do not receive financial compensation.

The approach of both closed groups is comparable to citizen journalism, where members post updates about social problems in real-time. Members share pictures of road accidents, new city ordinances, as well as questions about services in Iligan City such as the availability of money remittance centres and repair shops. There is also a community-building dimension, where members send greetings to their fellow Iligan residents.

Leading up to the 2019 midterm elections, members in these groups actively campaigned for senatorial candidates like Duterte’s right hand man, Christopher ‘Bong’ Go, and police chief Ronald ‘Bato’ dela Rosa. The two ranked first and second place in Iligan City. Given our research project aims to track innovations in digital campaigning, we investigated whether these digital campaign paraphernalia were maliciously seeded in these pages, in the same way that this tactic takes place in conspiracy group pages.

After careful investigation, we argue that these pages are indeed organic. They are genuine expressions of support for Duterte-backed candidates. While disinformation tactics also slip in these pages, for the most part they are spaces for Mindanaoans to continue building a political community invigorated by the first Mindanaoan president. From our interviews with volunteer administrators of these pages, we are convinced that their roots are organic in nature: committed volunteers supporting local candidates they believe in. For example, Karen, a middle-aged Iligan resident who is one of the founders of Lambo Iligan, disclosed that she spent about PHP 250,000 (US$4,763), from her personal pocket to support the campaign operations of a local candidate who she believed could bring progress in their city. This kind of support from members of the middle classes is characteristic of the Duterte campaign in 2016, where merchants, retailers and freelancers utilised whatever resources they had to support a candidate they believed in.

Lito, a veteran local campaigner who has successfully campaigned for underdog candidates, helped us make sense of these efforts by telling us that money is not everything when it comes to local elections. ‘Money cannot win an election,’ he emphatically said. Instead, a candidate needs ‘a clear message and a solid machinery’. And a solid machinery is composed of the ‘supporters who believe in you,’ according to the founder of one Mindanao-based closed group. This machinery cannot be manufactured. It is the product of years of organising on the part of campaigners, and relationship building on the part of candidates.

The point is that social media campaigning during the election was grounded in grassroots support. The campaigners we interviewed consistently expressed that an organic network of supporters is one of the most important factors in a successful campaign. Manny, another experienced campaigner, even asserts that ‘good advocacy is nothing if you lack machinery.’ Similarly, Karen argues that ‘people can’t just know of you, they have to see you. So, visibility and physical presence [are crucial].’ This is also the sentiment of Ameenah, a campaigner in Lanao del Sur, said that ‘all [political] candidates have money but winning the election depends on a good track record, and good relationship with people’. These are the same indicators for the strong support for Bong Go and Bato dela Rosa in Mindanao. Through their close affiliation with the highly popular president and their identity as Mindanaoans, they established a stronghold in the region.

While social media campaigning is increasingly employed at the local level, these strategies need to be accompanied by physical presence in communities. As Carlo, a young local campaigner puts it, ‘social media is the most effective way [to reach people], especially Facebook. Once you publish anything there, it reaches the masses in no time.’ But he also nuances it by claiming that ‘the real battle is on the ground.’ Christopher ‘Bong’ Go inside official state car with President Rodrigo Duterte. Bong Go was Special Assistant to the President before he resigned to run for a spot in the Senate. Image credit: Presidential Communications Operations Office.

Despite the moral panic about fake news on social media, there also exist genuine and committed supporters who create Facebook pages and groups to promote their candidates. But the fact that social media is becoming increasingly significant in influencing public opinion, not just in urban centres but also in remote areas in Mindanao, adds another layer of complexity to the analysis. Of course, even “organic” social media communities can be manipulated for political gain. But while we should continue to monitor disinformation tactics and push for reforms in campaign advertising, it is equally important to recognise the underlying reasons why Duterte’s candidates can continue to count on the support of Mindanaoans. Satirists cannot beat Duterte in his own game of telling jokes and performing in the theatre of the absurd.