Disappearing Japan: Vajiravudh’s translations of The Mikado and the Thai elite’s admiration of Japan

In 1890 the Thai monarch King Chulalongkorn travelled to British colonies in the Malay Peninsula and Singapore. In Singapore, Chulalongkorn and his companion noblemen had a chance to see a respectable opera: The Mikado; or, The Town of Titipu, staged by Harry Stanley’s Opera Bouffe and Pantomime Company. The Mikado is a comic opera in two acts composed by W.S. Gilbert and Arthur Sullivan. The Mikado’s setting is Japan, in a fictional town of Titipu in which comical situations take place. The Mikado had its first performance at the Savoy Theatre in London on 14 March 1885. From its debut, the opera ran for 672 performances. It took British audiences by storm and expanded its success to other countries in Europe and America. It was in the British colony of Singapore that the opera gained its first reception by the Thai monarch and his companions.

Around two decades later, Prince Vajiravudh, son of Chulalongkorn, composed his own versions/translations of The Mikado in Thai. The first versions is called Bot Lakhorn Sangkheet Ruang Migado (Migado: the ballad play). The second versions is called Bot Lakhorn Sangkheet Ruang Wangtee (Wangtee: the ballad play). Both are adaptations that closely follow the original in terms of plot, but several parts were altered or deleted. In term of form, Vajiravudh tried to appropriate Western opera by maintaining the original format using Thai literary forms in both adaptations: Thai music and poetic verses were used to substitute the original songs. A major difference between two translated versions is that names of the dramatis personae and the setting in Migado remained the same, while in Wangtee they were changed to Chinese-like names. 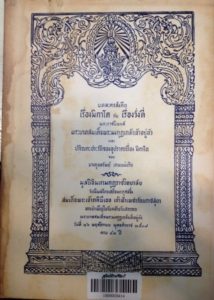 For example, Japan as the setting was replaced with a fictional kingdom called Tong-Hua-Tai-Chiang-Kok. The town of Titipu was changed to Pae-Peung–Fu. The Mikado of Japan was replaced with Pachongko Wangtee. The names Nanki-Poo was changed to Kiam-Sueng-Tee, Ko-Ko to Hae-Kung, and Pooh-Bah to Ta-Lao-Pao. Some of the names remind readers of Chinese dishes well known in Thailand. For instance, Ta-Lao-Pao sounds like Sar-Lar-Pao (a Chinese bun).

These exceptional changes make Wangtee stands out from its counterpart in Thais’ perception. Moreover, it is easy to regard this adaptation as an anti-Chinese work, just like many other writings of Vajiravudh, which have been widely regarded for their nationalist characteristics. Regarding these factors, one can easily notice Vajiravudh’s stance toward the Chinese. On the other hand, his attitude toward Japan has been long overlooked. We must not forget that in the original libretto, Gilbert and Sullivan’s The Mikado uses fictitious Japanese to poke fun at Victorian British society and to entertain the audience. In the meantime, Japan, the Japanese and their cultures inevitably appear as comical and ludicrous. We can find negative connotation in some descriptions of the Japanese in The Mikado like “queer and quaint” or “abject”.

Japan is still the setting in Vajiravudh’s Migado, but the depiction of it is more positive than the original opera. Any negative connotation tends to be omitted. For example, at the beginning of Gilbert and Sullivan’s opera, it describes the Japanese as followed:

If you want to know who we are,

We are gentlemen of Japan:

On many a vase and jar –

On many a screen and fan,

We figure in lively paint:

Our attitude’s queer and quaint –

You’re wrong if you think it ain’t, oh!

When Vajiravudh translated this passage, several details were changed, and the phrase “queer and quaint” disappeared.

In general, the translations of the British opera suggest Vajiravudh’s admiration of Western culture. In my opinion, they further reveal Vajiravudh’s attitude toward Japan, the country represented in the opera, as well. For Thai elites in the early twentieth century, Japan was a respectable and powerful Asian country. In the first decade of the twentieth century, the period in which Migado and Wangtee were translated and adapted, was the time that Japan stood out among other Asian countries since it was able to match Russia in the Russo-Japanese war. Thaweepanya, a magazine run by Vajiravudh and his companion bureaucrats from 1904 to 1906, repeatedly covered the events of war and international affairs relating to Japan. Unsurprisingly, they show Thai elites’ strong admiration toward this country.

Therefore, representing Japan in Thai translations of The Mikado was troublesome: the translator admired both Britain and Japan. How one could maintain the sense of humour of the original British comic opera while trying not to ridicule the latter? In this respect, changing the setting from Japan to China in Wangtee can be seen as a good solution to achieve that goal: by making Japan disappear altogether. It is widely known that the British and the Chinese played important roles in Vajiravudh’s political and cultural thought. Nevertheless, the translation of The Mikado reveals to us that Japan also had special recognition as well.

In Wangtee, the disappearing Japan then was replaced with China and Chinese elements. This associated with Vajiravudh’s politic of race that targeted the Chinese who lived inside Thailand. We might say that Vajiravudh managed to “kill two birds with one stone” with this translation.