The roughly 10 million undecided voters will have to make their choice on Sunday. The countdown has begun. Given that this election is likely to be a close race between Pheu Thai and the Democrats, both parties are seeking to win the hearts and minds the undecided voters, particular in Bangkok. Although the argument that polls can have an impact on voters as well as electoral outcomes remains contested among academics, the fact that Pheu Thai is leading in all the major polls taken in the last week of June (see graph below) bodes badly for the Democrats. 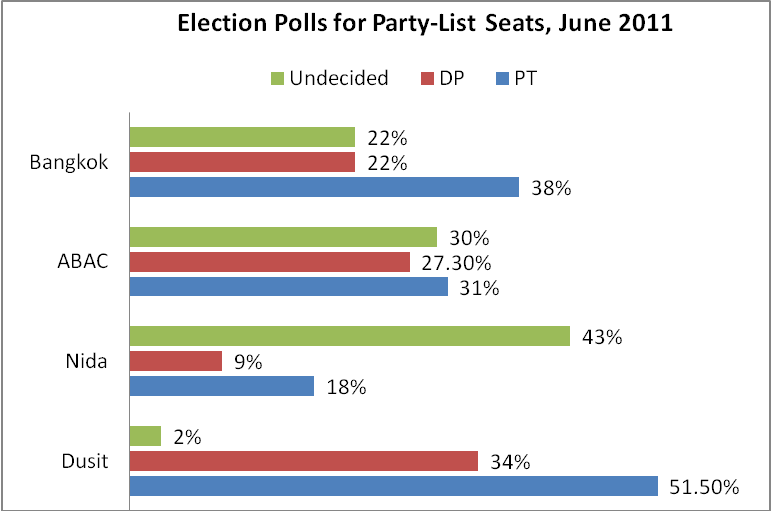 For the undecided, below is a summary of key rival policies between the two parties.

Pheu Thai: Raise minimum wage from an average of around 200 baht/day (provincial rate differs) to 300 baht/day.

DP says that raising the minimum wage gradually and over time is more realistic because business owners will be able to adjust accordingly. A major hike (like PT) is impossible for any business to adjust. Traditionally the minimum wage is set based on a compromise between labor, business and government. No government can just say the minimum wage will be 300 baht without consulting with the other two groups.

PT argues that 300 baht per day can be done and it must be viewed as part of the overall economic policy. The party’s economic plan is in three parts. First you reduce corporate income tax from 30% to 23% and then 20% by 2013. Then you raise the minimum wage to 300 baht as well as raising the wage for university graduates to 15,000 baht per month. The party claims that the money businesses save from a reduced tax rate will offset the rise in minimum wages. Overall, the purchasing power of minimum-wage earners and new graduates will improve.

Farmers can set up a joint rice scheme 50:50 with the state-owned agricultural bank and the bank will give each farmer credit of up to 70% of expected income from their rice, based on the guaranteed price of 15,000 baht/ton.[1] They can use this credit to buy raw materials, seeds or fertilizers. The crop mortgage program will be supporting this plan so farmers can pledge their rice with the bank if they expect market prices to exceed the minimum level of 15,000 baht. Debts will be deducted from income at the end, interest free. This scheme is designed to give farmers cashflow in between crops and keep loan sharks at bay. A 3-year debt moratorium would also be offered to farmers with debts less than 500,000 baht. Those with debt of up to 1 million baht will have to refinance.[2]

The Democrats’ agricultural policy aims to raise farmers’ incomes by 25% through price insurance that now covers rice, tapioca and maize. Development of new seed strains and the expansion of irrigation and water management systems will be a focus. The party vows to accelerate land reform by allocating community land deeds for 250,000 farmers using state-owned property; extending social security to cover 25 million farmers and informal workers as well as setting up special farm economic zones to improve the efficiency of the production and distribution chain.[3]

Abhisit has said during the DP campaign rally at Ratchaprasong and elsewhere that PT will give amnesty to Thaksin and return his 46 billion baht. So far Yingluck maintains that amnesty is considered a “political issue” and that it is not a priority for PT right now. PT will work on economic policies first. While statements from Yongyuth Wichaidith, Yingluck and Natthawut confirm that PT has no intention to give an amnesty to any one person, it does not mean PT will not seek an amnesty at all. In fact, both Chalerm and Yingluck were seriously considering the various parliamentary channels for an amnesty just a month ago.[4]

Abhisit has declared a Facebook war on PT via his “From the Bottom of Abhisit’s Heart to My Fellow Thais Series”[5] that PT lied outright when claiming that an amnesty is not the party’s policy. DP’s policy is clear: absolutely no amnesty. Abhisit confirmed during the six-party debate on June 23 that the Democrats will not give an amnesty to any one single person and anyone charged with corruption and fraud will be punished accordingly.[6]