We are delighted to welcome guest blogger and acclaimed food and travel writer, Sheridan Rogers, who travelled to Indonesia in September 2016 with PoP member Michael Leadbetter as part of the Forum for East Asia-Latin America Cooperation. Here, Sheridan investigates traditional food in Yogyakarta, Indonesia.

Food is a wonderful vehicle for discovering a country and learning about history, culture, and the always-evolving relationship between the edible elements of the landscape and the development of local identities. As the Sumatran-born food and cookery writer Sri Owen points out in her informative book Indonesian Regional Food & Cookery, ‘To write about food is to write about place. Every dish [is] a regional dish to start with, a response to climate, resources and custom.’

Food also acts as a signifier of heritage, custom and ritual. A major reason Owen cites for writing the book is a desire to record the food traditions of Indonesia’s past. As she explains:

I knew already that we are in danger of losing some very tasty dishes in the swift currents of social change, though I did not then realise how strongly those currents are running. This is what made me want to contribute, in my own small way, to the work of saving ‘traditional’ foodways from oblivion. Everywhere people are moving house, abandoning the villages to live in towns and moving from the regions to the capital, encouraged or compelled by rapid economic and industrial development.

On a recent trip to Indonesia as a guest of FEALAC (Forum for East Asia-Latin America Cooperation), I spent a couple of days in Yogyakarta, Central Java, where I saw firsthand how important certain dishes are to the identity of a city or region. For the people of Yogyakarta in Central Java, gudeg is regarded as the makanan icon (iconic food) of their city. Sri Owen speaks of gudeg as ‘a real piece of Javanese culinary and social tradition.’ While many visitors to Indonesia are already familiar with dishes such as gado gado (steamed vegetables with peanut sauce), nasi goreng (fried rice) and sate ayam (chicken satay), not many of us know about gudeg – a rich, sweet, fruity, mildly spicy stew in which young jackfruit is slow-cooked in coconut milk and palm sugar with garlic, shallots, candlenuts, coriander seed, galangal and bay leaves. The addition of teak leaves lends a reddish brown colour to the dish, though tea bags are increasingly substituted for a faster result.

Gudeg is an ‘any time of day’ meal that is rarely served on its own; instead, gudeg Yogya asli (real Yogya gudeg) is actually a collection of several dishes served on one plate:

This is the most satisfying and delicious of all meals for the Yogyanese, but too sweet (as a savoury dish) for everyone else. Most tourists regard it as an acquired taste, and one that they are not staying long enough to acquire. But once you have tried gudeg at the right place, you will realise how good it can be.

All the elements of gudeg Yogya asli can be found in the Javanese landscape: the nangka (jackfruit) for the gudeg, chicken and coconuts for the opor ayam (chicken in coconut milk), and buffalo for the sambal goreng krecek (buffalo skin crackling) and rice. Once assembled, it’s topped with a large tablespoonful of blondo (very thick, creamed coconut). Two different types of gudeg are to be found in Yogya: the kering (dry) version, which is deep brown with a thick sauce and is served during the day, and the basah (juicy, wet) version, which is lighter and soupier and eaten in the evening.

The dry version has a deep brownish colour to every ingredient in the dish, from the jackfruit, egg, chicken, and the thick sauce that’s made from coconut milk. It is rich, intense, vibrant, and silky smooth. While the wet version comes looking lighter in a soup, it still packs enough oomph to blow your dietary concerns to oblivion. The chicken and tofu comes in a light grey coloured and thick soup. But this sauce is what makes or breaks the dish. Made from thickened coconut milk and chicken broth with a rich umami taste and aroma, it can transform a bed of plain rice when spooned over.

So popular has this traditional dish become that a couple of years ago, the Yogyanese held a festival in its honour, the aim of which was to attract more foreign and domestic visitors to this cultural centre. ‘Although gudeg is a classic Javanese food, its lovers are multi-ethnic and multi-cultural from Sabang (Aceh) to Merauke (Papua). They visit Yogyakarta to taste gudeg. Many foreigners also love it,’ the festival’s organiser, Chandra Setiawan Kusuma told the Jakarta Post.

Located close to the Keraton (Sultan’s Palace), Jalan Wijilan was nominated as the official centre of the festival because it has twelve gudeg restaurants standing next to each other along the street.

Some of Yogyakarta’s famous gudeg restaurants on Jalan Wijaya

Bu Slamet was reportedly the first person to open a gudeg restaurant in 1942, three years before Independence was proclaimed. ‘The festival will also see the launch of the Gudeg Wijilan Association (Paguyuban Gudeg Wijilan), which aims to strengthen partnerships among gudeg sellers in Yogyakarta and to help them work together to ensure gudeg’s survival amid the mushrooming of new restaurants,’ said Chandra. ‘Our good partnership is the key to why we can live in harmony even though we run similar businesses and our restaurants stand next to each other.’

Yogyakarta’s gudeg festival attests to some of the pressures on local governments in Indonesia to generate tourism revenue through creative means. Some entrepreneurial gudeg sellers have gone as far as to can gudeg just like corned beef or sardines, thus making the dish more easily transportable for tourists.

By conceptualising gudeg as an ‘endangered food’, we start to understand some of the anxieties and nostalgia Indonesians feel about their rural or semi-urban pasts, in sharp contrast to their highly urbanised and commercial present. The festival precludes other cities and countries from claiming gudeg as their dish. In so doing, gudeg has become a tool by which a distinctly, and perhaps exclusively, Yogyanese cultural identity is asserted. While other cities in Central Java may have their own style of gudeg, it is Yogya that has branded this dish as its very own.

Keen to make gudeg at home? You can try this recipe.

Sheridan Rogers is an Australian-based food and travel writer with over 30 years’ experience. She travelled to Indonesia in September 2016 with FEALAC (Forum for East Asia-Latin America Cooperation), the goal of which is to increase bi-regional cooperation and dialogue among its 36 members. You can discover Sheridan’s popular food and travel blog, including a recipe for Janet DeNeefe’s nasi goreng hijau (green fried rice), here!

The Sensual Art of Nyonya Cuisine

Food as heritage: The origins of peranakan cuisine 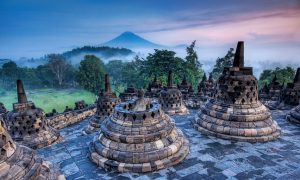 Java's temples are sites for the performance of power, prestige and celebrity