1. The black campaign and the men in white coats Given the tendency for considerable smear or ‘black’ campaigns in this election so far, this week saw both candidates declare their desire for a clean campaign. One rather unknown yet provocative tabloid Obor Rakyat quoted ‘senior politician’ Amien Rais, who continued with the conspiracy we mentioned in New Mandala previously – that Jokowi was linked to capitalists and Christian missionaries, and in particular James Riady. The next day, the James Riady-owned Jakarta Globe quoted Jokowi’s man and former Head of Intelligence, Hendropriyono, declaring that Prabowo is a “psychopath”. Hendropriyono defended himself, saying “I am not conducting a negative campaign or a black campaign. When we were in the military, if we wanted to receive a promotion we would have to take a mental evaluation. I need to tell you something about Prabowo, who earned [the lowest score] – with a just a little stress he could have gone crazy.” To Prabowo’s rescue was the ‘Flobamora Institute’ (yes, really) who, presumably under orders, reported Hendropriyono to the police for defamation. You’ve gotta love ‘the festival of democracy’…

I reckon the only way to settle this particular dispute would be a complete and final psychological evaluation for Amien Rais, Hendropriyono, the ‘Flobamora Institute’, and the editors of Obor Rakyat. And yes, a few of us editors here at Indonesia New Mandala might also need our head read, given we actually read this stuff and choose to write about it. But in the meantime, before the ‘nice men in white coats’ arrive, it is unlikely these ‘black campaigns’ will cease as the election date nears, and we at New Mandala will continue to bring you this stuff every Friday.

From top to bottom the captions read:
Appears in front – Appears in back
Gives orders – Is ordered
Gives directions – Is directed
Is respected – Gives respect
Main figure – A figure
Motivator – Actor

This image passed around social media is an example of what appears to be one of the most common – and effective – criticisms of Jokowi. The images and accompanying captions contrast Prabowo’s supposed strong leadership and autonomy (on the left) with Jokowi’s perceived lack of assertiveness and apparent domination by Megawati (on the right).

While this particular image focuses on Jokowi’s allegedly submission to PDI-P chairperson Megawati, his constant appearance alongside other senior figures from the Old Guard, such as his VP, Golkar figure Jusuf Kalla, or coalition partners Wiranto from Hanura and Surya Paloh from Nasdem, further places him at risk of appearing beholden to conservative forces. Until voting day on 9 July, there will be plenty of opportunities to fuel speculation that he is indeed merely a puppet being dangled around by a generation of politicians not ready to leave the stage.

This week, for example, on his first inter-provincial campaign stop on Thursday, Jokowi visited Papua. He had already visited Papua during the legislative campaign in April and his second trip there ought to have been another opportunity for him to utilize his reformist credentials and signal a more heartfelt approach he might take towards the province as president. Instead, Megawati herself accompanied him to Papua. Most Papuans remember that it was during Megawati’s presidency (2001-2004) that Papuan leader Theys Eluay was murdered by Kopassus soldiers, the province was split into two, and security forces hardened their response towards expressions of separatist sentiment.

If Jokowi cant put some distance between himself and the stuffy figures around him, images such as this one will continue to resonate with voters.

Was it just me, or did everything seemed to go a bit topsy turvy this week? It was as if the campaign teams on other side suddenly thought, “crap, it’s the first week of June. What now?” With just over a month of the campaign to go, campaign tactics and rhetoric seized up, flipped over and did a face-down wiggle in the dirt.

But then things just went all out weird. First there was Gerindra’s hapless head of Defence, Muhammad Harris Indra who announced that after interrogating his thoughts and his heart, he was voting for Jokowi. ‘Pick the candidates with the least problems’, he pleaded. (No-one’s seen him since).

Then there was Jokowi who declared the campaign period a time of great happiness. This was despite spending most of his own campaign either staring into the ground or flanked by PDIP hacks and looking balefully at the nation’s media with help-me eyes.

Not to be outdone on the happiness manifesto, the next day the Gerindra camp, who have so far forged their name in sabre rattling and horse riding, came out with a campaign video to Pharrell Williams’ foot-tappingly irresistible Happy.

Of course this isn’t the first time Gerindra has attempted a soundtrack (go to 1.08), but with this vid, Gerindra showed that just because you’re Indonesia’s biggest ever coalition of corruptors, bigots and violent religious extremists, doesn’t mean you don’t get into Oxford bikes and hipster chic. Rizieq Shihab wiggling in a pair of candy coloured capri pants was tellingly missing from the shoot but pledged 10,000 FPI votes anyway.

Finally, all eyes have been on the military this week – what with SBY demanding that the security apparatus should stay neutral and the subsequent news that the Central Jakarta Koramil have been bugging constituents to disclose their votes (unsurprisingly 90% of a ethnic Chinese dominated area told their Babinsa that they were plumping for Prabowo).

But as far as campaign weirdness goes the real story this week is with Polri. One would think that after 32 years crushed under ABRI and the huge political and economic benefits that democracy has bestowed upon Polri, that the force would be rather allergic to Prabowo’s authoritarian displays. But this week, Prabowo successfully courted the families of the nation’s coppers by appealing to their personal attractiveness, promising the nation’s cops that under his presidency they were going to go from this… 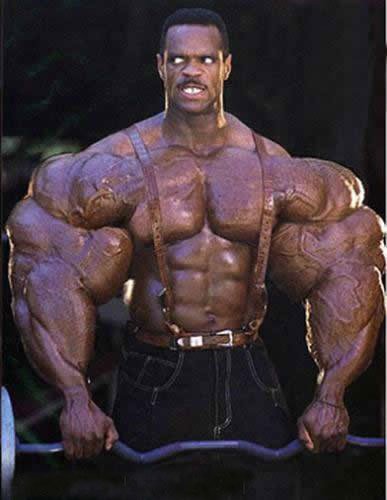 Argues Prabowo, the police suffer from an authority deficit, which he will restore through a more rigorous human resources policy focused on hiring for physical fitness and good looks. The police just aren’t as scary as they should be, apparently.

Compare that to the “boring” policy on offer by Jokowi-JK which promises greater police accountability and better governance of the force by moving the Polri from their dangerously politicised position under the president to a proper civilian ministry. Which most certainly would not make the nation’s cops very happy, happy, happy, happy.