‘Are you still human?’

These questions capture the core identities of distinct protest movements from different points in Thai political history. The first question—’Are you Thai?’—has been common among right-wing protestors such as the Yellow Shirts, active between 2005 and 2006, as well as the People’s Democratic Reform Committee (PDRC) which played an important role in Thai politics from 2013 to 2014. For almost two decades, right-wing protesters have repeatedly levelled this question at their political opponents.

The second question—’Are you still human?’—has been raised only recently by the People’s Party 2020 (Khana Ratsadon 2563 or คณะราษฎร 2563), the progressive demonstrators currently on the streets calling for political reform and the end of the Prayuth Chan-o-cha administration.

The People’s Party 2020 could be the first nation-wide political movement to incorporate ‘humanness’ into its core discourse. This is quite a phenomenal development for Thai politics and represents nothing less than a challenge to the conditions for membership in the nation.

Saichol Sattayanurak, a leading Thai scholar, argues that the concept of ‘Thainess’ has been constructed by the Thai state and right-wing intellectuals to promote a hierarchical social and political order. The discourse of ‘Thainess’ insists that Thai people are naturally unequal and that everybody should ‘know their place’ and behave accordingly. The practice of ‘knowing one’s place’ starts from micro political institutions such as the family, but successively reenforces the most influential institution of the nation—the monarchy. The father is the head of the family, civilians must not question authority, and subjects must obey the rulers.

The discourse of Thainess establishes membership in the nation as highly conditional: to be a part of this nation and granted political space, you must meet the criteria of Thainess. For conservatives, “being Thai” centres around loyalty to the nation, religion and king. The question “Are you Thai?” was widely invoked by the Yellow Shirts in 2005, but its connotations have intensified overtime with the effect of excluding numerous groups from politics. Being asked this question is an accusation of a lack of patriotism, with the premise that criticising the state, monarchy or broader hierarchical sociopolitical order is a threat to the nation which warrants punishment. As such, ‘Thainess’ has marginalised a variety of groups from rebellious youths, feminists, LGBTQ people and republicans.

Such groups have not only been deprived political space, they have also been a target of persecution. Those charged with lese-majeste or incitement are often previously and simultaneously branded ‘non-Thai’ or ‘nation haters.’ In other cases, people who refuse to show respect to the monarchy have been physically attacked by conservatives.

Faced with draconian laws, political violence and exclusion, progressives have fought back with a new discourse of ‘humanness.’ The People’s Party 2020 supporters have started to utter the question ‘Are you still human?’, urging those who vilify pro-democracy groups to reconsider if protecting ‘Thainess’ can justify the sacrifice of basic human rights. A popular hashtag among supporters, ‘Decrease Thainess, Increase Humanness’ (ลดความเป็นไทยให้น้อยลง เพิ่มความเป็นคนให้มากขึ้น) summarises their argument well.

The People’s Party 2020 is redefining the nation by withdrawing the condition of Thainess, imagining a more inclusive and tolerant political body. One of the most common catchphrases of the movement is ‘The nation is the people’ (ชาติคือประชาชน). Here, the word ‘people’ does not mean Thais. Rather, it means ‘citizens’ or ‘humans’ and is culturally and ethnically neutral. This newly-defined nation does not include only ‘Thais’ and discriminates by neither political ideology, cultural or ethnic differences. Protestors also show respect to their new version of the nation, and tacitly insist they are not “nation haters”, by standing for the national anthem at the end of their demonstrations.

It should be noted that a redefinition of the nation is not the same thing as a redefinition of ‘Thainess’. While attempting to redefine the nation, it is unclear whether the progressive protestors are also redefining ‘Thainess’. Unlike the words ‘human’ and ‘nation’, which are seen commonly during demonstrations or in online discussion, the word ‘Thai’ rarely appears. If it does, it is criticised but not necessarily redefined.

After years of ideological work by conservatives, ‘Thainess’ has been deeply ingrained in public discourse in opposition to democracy. ‘Thainess’ is a value that occupies such hegemonic status that redefining it is not a simple task. That is perhaps why the protestors have chosen to redefine the conditions for membership to the nation by replacing Thainess with humanness, but stop short of challenging the meaning of Thainess itself.

The power of ‘humans’

One function of employing the discourse of ‘humanness’ is to prevent political violence, by laying bare the ridiculousness of efforts by conservatives to demonise protesters. The appeal of the People’s Party 2020 to humanness also urges security forces and right-wing mobs to respect their basic human rights, perhaps in the knowledge that crackdowns against past movements such as the Red Shirts have been justified by conservatives on the basis of neutralising ‘threats to the nation.’

However, the discourse of humanness may have meaningful effects on Thai politics beyond the immediate imperative of preventing violence. The People’s Party 2020 has the potential to gain the greatest and most diverse mass support in Thai history. This is in part because no movement in the past employed a discourse of humanness to this extent. The 14 October and the May 1992 movements were fundamentally nationalist and embraced ‘Thainess’ as a core value. The 6 October protesters, the Assembly of the Poor and the Red Shirts defined themselves variously as ‘proletariats’, ‘the poor’ and ‘subjects.’ Such identities primarily focussed on economic inequality, and were probably not relatable to people marginalised in other aspects, such as age, gender or locality.

The People’s Party 2020 embraces marginalised groups deemed ‘less-Thai’ or ‘non-Thai’, offering a stage for diverse and heterogenous groups to bring sensitive issues to the public’s attention. One example is the participation of Malay Muslims from southern provinces, whose expression of grievances towards the Thai state’s violence are regularly branded as sympathetic to terrorism. However, after the rise of the People’s Party 2020, protesters have given speeches condemning atrocities such as the Tak Bai incident and regular forced disappearance cases in the south. It is remarkable that these speeches are being delivered in the middle of Bangkok and other provinces outside the deep south.

Another striking example of sensitive issues brought to the forefront of public discussion is reform of the monarchy. Previously, criticising the Thai royal family was considered the worst kind of crime. Republicans and monarchy reformists are now brave enough to talk about the abolition of lese majeste, the role of the crown property bureau and military-monarchy relations. Some have even proposed new models of constitutional monarchy.

Other marginalised groups have found a space in the People’s Party 2020 movement as well: secondary school students who want to eradicate authoritarianism in education, former red shirts fed up with economic inequality, feminists, sex workers who want to legalise their jobs, LGBTQ people demanding same-sex marriage, and people from the provinces asking for greater decentralisation. All share a similar hope that their problems can be better solved through democratisation, as the popular hashtag ‘if politics is good’ (ถ้าการเมืองดี) suggests.

In the longer term, the political spaces created by the People’s Party 2020 might be the foundation for more participatory, deliberative and inclusive democracy. The public dialogue that the movement has ignited may one day weaken the hierarchy of exclusion, allowing those who have never been heard to be heard.

But though the People’s Party 2020 has gained enormous support, even humanness has its boundaries. So long as Thainess remains hegemonic and is not deconstructed, ‘humanness’ and ‘Thainess’ remain to a significant extent conflicting. It remains to be seen whether and how the movement can engage in dialogue with those who support some degree of political reform but also hold onto traditional notions of Thainess. Perhaps over time, given the generally progressive views held by younger Thais, the discourse of ‘Thainess’ will wither away.

Alternatively, ‘Thainess’ will be slowly redefined into a more inclusive and democratic conception. This scenario is challenging because the discourse of ‘Thainess’ has long been deep-rooted in Thai society. Yet attempting to reconstruct it, just as the People’s Party 2020 is presently reimagining the nation, might be worth the effort. Only when the conflict between ‘Thainess’ and a belief in democracy and fundamental rights to political participation is reconciled will people no longer have to choose between ‘being Thai’ and ‘being human’. 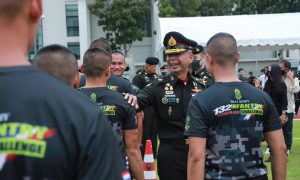