In Thailand’s Malay Muslim-majority southern border provinces—the conflict-ridden region historically known as “Patani”—mobile phone operators have reportedly shut down services for several users who failed to register their SIM cards in a government facial recognition system. This “two-shot identification” system scans and collects the facial data of each registered user. In June last year, the Internal Security Operations Command (ISOC) made registration mandatory for all persons using a mobile phone in the region as part of its counterinsurgency strategies.

According to ISOC spokesperson Colonel Pramote Prom-in, law enforcement authorities plan to use the data collected under this scheme to identify separatist insurgents who use phone-triggered improvised explosive devices in violent attacks. The registration deadline was set to 30 April 2020, and failure to comply has resulted in a temporary suspension of unregistered numbers.

Over the past few years, biometrics has emerged as a critical warfare tool used by the Thai government to fight the insurgency in the southern border provinces. Security forces actively harvest the local population’s biometric features, especially DNA profiles and facial data, as a surveillance tactic to distinguish insurgents hiding among civilians. Such tactics complement other conventional counterinsurgency strategies, such as setting up checkpoints, raiding houses and interrogating suspects for intelligence.

For the government, this advanced technology promises a quick fix for the decades-old conflict In the Deep South. However, the biometric collection projects have already began to heighten the local population’s distrust of the state and could eventually result in a counterproductive invigoration of the insurgency.

Thailand’s use of biometrics in counterinsurgency strategies is not entirely new. In 2012, security forces in the southern border provinces began to use DNA profiling technologies to analyse DNA samples at crime scenes and find suspected insurgents with a genetic match. Security officers are tasked with creating a DNA databank that stores the genetic profiles of all potential insurgents to enhance the efficacy of these technologies.

Authorities have been actively collecting DNA samples from Malay Muslims during searches at military checkpoints and raids on houses or private religious schools, especially in the “red zones” where insurgents are supposedly influential. On 3 April 2015, several Malay Muslim activists and student leaders were allegedly subject to such arbitrary DNA tests. A month later, the United Nations’ Committee on the Elimination of Racial Discrimination issued a letter to the Thai government expressing serious concerns that forced DNA collection carried out by the Thai security forces “could amount to ethnic profiling.”

The practice of forced DNA collection was officially institutionalised in April 2019 when the Royal Thai Army decided to incorporate DNA collection as part of the annual military conscription process for “national security purposes.” This policy was applied exclusively to the provinces of Pattani, Yala and Narathiwat, as well as the four Malay Muslim-majority districts of Songkhla, which include Saba Yoi, Tepa, Natawee and Chana. An inevitable consequence of the policy is the overrepresentation of Malay Muslim DNA profiles in the official database, which allows security agencies to undertake targeted surveillance on this population.

The government launched its mandatory SIM card registration policy only two months after the incorporation of DNA collection in military conscription. Later, on 20 January 2020, Deputy Prime Minister General Prawit Wongsuwan visited the Pattani Municipal Office’s CCTV Control Center and announced that the government would integrate artificial intelligence (AI) into at least 8,200 surveillance cameras in the southern border provinces. Reportedly, the AI software will increase the efficacy of the authorities’ “monitoring and risk notification system” to ensure the local population’s safety. To date though, it remains unclear whether there will be any synchronisation between the AI technology to which General Prawit referred and the “two-shot identification” facial recognition system.

The haunting history of GT200

Such dragnet biometric collection is a strategy based on the presumption of guilt of all persons in the Malay Muslim-majority region, the “enemy” population. The rapid rise of biometrics illustrates the Thai state’s political fantasy of dominating this population by creating a voyeuristic regime of power built upon in-depth knowledge about it. It seems almost as though the authorities are constructing a renewed, (bio)data-driven version of Jeremy Bentham’s Panopticon prison in the southern border provinces. Unlike Bentham’s clueless inmates though, most local people know well that they are being watched by prison guards in green uniforms.

Contrary to Foucault’s interpretation of the Panopticon in Discipline and Punish, the establishment of a panoptic regime in Patani has not always produced “docile subjects” perfectly disciplined under state authorities. For some, being subject to biometric monitoring has sparked a new political consciousness that resists the longstanding, abusive exercise of state powers in this region.

“I will never register my SIM card. The mandatory facial scan measure reminds me of the GT200 scandal,” said Abdullah (pseudonym), a young political activist based in Songkhla. He was referring to the faulty bomb detectors which the Thai national security authorities used to identify traces of explosive substances on the bodies of alleged insurgents in the southern border provinces from 2007 to 2010.

In 2007, the security forces used the GT200 detectors to search houses and arrest more than 400 young Malay Muslim men for alleged involvement in the insurgency. These men were then forced to attend ‘vocational training’ in upper southern provinces at what were, in reality, re-education camps. Later on 19 March 2008, Imam Yapa Kaseng, a 56-year-old man in Rue Soh District of Narathiwat, was arrested and detained at the 39th Task Force Camp during a military operation to search for insurgents in his village using the GT200 devices.  He was then tortured and murdered by interrogation officers while he was in detention.

Only two years later, in 2010, the Ministry of Science and Technology tested the GT200 device and found that it had only a 20 per cent success rate in detecting explosive substances. According to this finding, any legal actions that were previously based on a GT200 reading are highly likely to be groundless or scientifically inaccurate. The government eventually abandoned the device and investigated the corrupt purchase deal behind it. However, the victims of human rights violations due to the GT200-led COIN operations did not receive any reparations, and their perpetrators have not been to justice.

“How could I trust that the government will use our data properly? It is hard to believe that state officials will not take advantage of this measure and enforce it with the same ethnic prejudice again,” said Abdullah.

As biometrics start to take center stage in the government’s counterinsurgency strategies, the history of GT200, deeply entangled in corruption, ethnic prejudice and a culture of impunity, has returned to haunt the Thai state. Instead of fostering docility, the biometric collection project is forging a new type of subjects resistant against state abuses.

Biometrics in the time of COVID-19

Negative sentiments among locals towards biometric collection have escalated during the COVID-19 outbreak. As the public heeds the recommendations of public health organisations to practice physical distancing, ISOC continues to collect people’s DNA during house raids and suspend unregistered mobile phone numbers. These measures have been criticised because they make the local population even more vulnerable to the current public health crisis. DNA collection, for instance, forces officials and villagers to physically interact, exposing each other to risks of infection. Furthermore, mobile service shutdown means people may not receive urgent medical or humanitarian assistance because they lack access to telecommunications services.

On 1 May 2020, the Barisan Revolusi Nasional (BRN), the main insurgent group in the region, issued a press statement condemning the Thai military’s counterinsurgency operations, including “forced DNA collection,” during the COVID-19 crisis. This statement might seem ironic given the BRN’s record of violating international humanitarian rules in indiscriminate attacks against civilians. However, the BRN’s condemnation of forced DNA collection demonstrates that the movement has picked up on public frustrations with biometric warfare, leveraging these grievances to decrease the government’s political legitimacy in the eyes of the local population. Instead of enhancing the efficacy of counterinsurgency strategies, the new biometric regime has carved out yet another contentious space amidst the conflict.

During this sensitive time, the government needs to re-think its counterinsurgency approach carefully. The establishment of a biometric-led surveillance superstructure in the southern border provinces will inevitably come at the cost of increasing public resistance and decreased legitimacy for the state and military presence in this region. Biometric technologies might help law enforcement agencies catch some insurgents, but this will only serve a short-term purpose of suppressing the violence. Instead, the government should consider shifting its priorities from day-to-day suppression of insurgent activities to addressing the causes of the conflict in the region. These are rooted in rampant human rights violations, structural inequalities, and the imbalance of power between Bangkok and Patani. 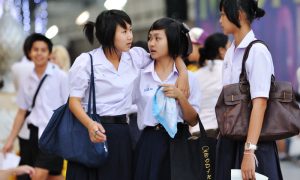