This is a translated and edited version of an article originally submitted in Thai. The original Thai article can be read below. ฉบับภาษาไทยอยู่ข้างล่าง

On 1 May, the Education Ministry published its new Regulations on Hairstyles of Students B.E. 2563 (2020) in the Royal Gazette. The document updates directives that for decades allowed schools and other education institutions to oblige male students to maintain army-style crew cuts and female students to maintain bobs no longer than their earlobes.

Notable changes in the new regulations include Section 4, which allows students of all genders to wear longer hairstyles. For male students, hair on the side and back of the head should not extend beyond the base of the neck. Students must also maintain “neat” hair styles, which means no perms, hair dye, moustaches or beards, or other special styling such as shaved symbols. Meanwhile Sections 5 and 7 confer school boards and administrators the discretion to install their own specific regulations on the hairstyles of students, provided these do not conflict with the Ministry’s directives.

But what is most interesting about the new regulations is an opening statement which states an intention to “protect the human dignity” of students. Students who mobilised over the last decade have not been fighting merely for the choice to grow out their crew cuts. Their claim has rather been the following: “I view my hair as an organ of my own body”. A student should choose to make changes to their body, rather than be forced.

In other words, the issue of student hairstyles has expanded beyond the relaxation of regulations to the question: “Does the requirement that students cut their hair infringe on the rights and liberties of students under a liberal-democratic framework?” Liberal-democratic philosophies emphasise the concept of “the individual”, an actor with thoughts of their own who is able to exercise their rights and liberties as they see fit provided they do not infringe on those of others.

Bodily autonomy is enshrined in several legal documents, from Article 28 of the 2017 Thai Constitution to Article 28 of the UN Convention on the Rights of the Child which states that school discipline should be “administered in a manner consistent with the child’s human dignity” (Thailand signed onto the Declaration in 1992.) Thai students have not merely hoped for the modernisation or relaxation of regulations, but staked claims to rights, liberties and human dignity: “We, in the status of individuals of a free world, have the right and freedoms to wear our hair as we like.”

The new regulations have been well received by several mainstream news outlets as well as the Thai cyber-verse. They are undoubtedly a step in the right direction against a culture pervading Thai institutions that subjects students to strict discipline and obedience to orders, sometimes at the expense of their rights and liberties. However, some doubts linger over whether the implementation of the regulations will actually broaden the choices that students have when it comes to their bodies, let alone stay true to the spirit of protecting their dignity.

A brief history of student resistance against hairstyle regulations

Over the past decade, Thai students have mobilised in a number of forms, especially over social media, to push the issue of hairstyle regulations into the public eye. The student groups Thailand Educational Revolution Alliance (TERA) and Education for Liberation of Siam have led this movement.

Before the latest changes, regulations on the hairstyles of students were contained under two documents. First, the Ministerial Regulations No. 1, B.E. 2515 (1972), promulgated under the authority of the Order of the National Executive Council No. 132 during the dictatorship of Thanom Kittikachorn, stipulated that long hair on both males and females was unbefitting the status of a student. The regulations mandated that male students maintain crew cuts close to the scalp, while females maintain bobs no longer than their earlobes.

The Ministerial Regulations No. 2, B.E. 2518 (1975) made some amendments to these rules. For male students, the new directive removed the requirements in the 1972 regulations that hair at the front and crown of the head not exceed 5 centimetres, and hair surrounding the crown be cut close to the scalp. It stipulated only that male students were not allowed to grow the sides and back of their hair longer than the nape of their necks. There were no changes for females.

Despite the promulgation of these new regulations however, the 1972 regulations appeared to remain better known in society and many schools continued to adhere to them. In 2003, the Order of the National Executive Council No. 132 was repealed by the Child Protection Act. However, the Ministerial Regulations No. 2, B.E. 2518 (1975) remained in force under interim measures.

The student movement began mobilising from 2012 to reform hairstyle regulations, and enjoyed a minor victory during the government of Yingluck Shinwatra. In 2013, the Education Ministry led by Phongthep Thepkanjana circulated a notice to ensure that all schools were enforcing the same standards—namely the second edition of the Ministry of Education’s regulations. But indications from the Ministry that it would allow greater flexibility when it came to the hairstyles of female students were interrupted by the coup of the National Council for Peace and Order (NCPO).

After of the 2014 coup, officials rarely engaged in public discussion on the subject of student hairstyle regulations, reflecting the flourishing of a militaristic education philosophy promoting obedience and unity (as exemplified in the passage of policies such as the promotion of “12 core values for Thais.”) Still, the minor victories of the past emboldened the student movement to continue fighting. Education for Liberation of Siam, for example, organised the exhibition “Education is Killing Me” at the Bangkok Art and Culture Centre to draw attention to the suppression of freedom of thought in school curriculums. The activities of student activists combined with a steady stream of news stories on the aggressive enforcement of school rules, such as through forced head shavings, to drive criticism across social media.

Problems in the new regulations

From the perspective of some student activists, the new regulations are a “second victory”. But how genuinely will they protect rights and liberties? While the document states an intention to protect human dignity, this intention is qualified by other simultaneous objectives: “to clarify existing rules on the operation of places of education, to reflect changing times, and to ensure that students behave correctly.” If the regulations were amended with several simultaneous goals, which values should educational institutions give precedent to?

While the new regulations have loosened past rules, they still require that male students grow out their hair “neatly and appropriately” and that females tie up long hair. Article 7 of the new regulations also preserves the prerogative of school administrators to produce their own specific regulations on hair provided they do not conflict with the Ministry’s directives, giving discretionary power to education institutions to continue defining hairstyles which are “correct and appropriate.”

Do such directives aim to protect the rights, liberties and human dignity of students in accordance with liberal democratic principles? Or do the regulations refer to “human dignity” merely to give a veil of legitimacy to their instructions, while allowing education institutions to continue obstructing the bodily autonomy of students? In the end, school administrators remain the ones who decide what should be done with the hair on the top of students’ heads.

Though the Ministry of Education’s Regulations on Student Hairstyles (2020) are not without problems, we can still leverage them in the fight to make hairstyles the choice of students themselves. Civil society and students can cite the regulations to pressure the Office of the Education Ministry, which has the power to deliberate and make rulings on conflict over the regulations, to compel schools across the country to consider protecting the rights, liberties and human dignity of students as the “highest aim” of the regulations. We should also campaign for concrete appeals mechanisms in schools.

More importantly, the student movement should mobilise for the repeal of these insensible regulations, which should not exist in the first place, and demand that those in power genuinely return the rights and freedoms of the body to students. The new regulations still guarantee school administrators the same prerogatives, a legacy descended from the announcements of former juntas who used their dictatorial powers to control the bodies of students.

A guarantee to bodily autonomy is only genuine when students themselves have the prerogative to make choices about their bodies. Conferring that choice will push Thai schools to finally learn how to respect difference in students. After all, our hairstyles don’t hurt anyone else.

The authors are members of a group of students preparing to sue the Ministry of Education over alleged infringements to their rights facilitated by the regulations on student hairstyles. 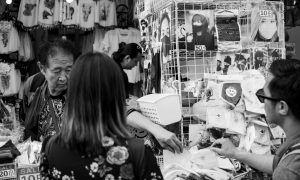