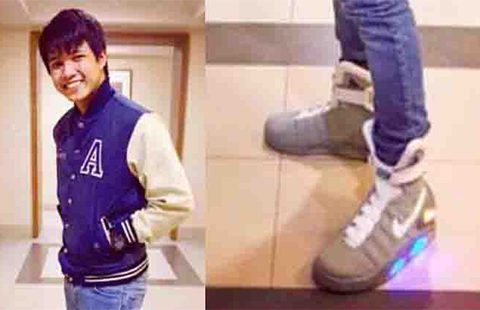 Futuristic shoes a kick in the guts for Philippines poor Brian Poe and the sneakers that caused quite a stir.

Mish Khan looks at how sneakers have caused a stir in the run-up to the Philippines presidential vote.

Philippines presidential candidate Senator Grace Poe drowned in waves of criticism this fortnight, after her son, Brian Poe Llamanzares, caused an uproar on social media for purchasing an expensive pair of Nike shoes.

Netizens felt the purchase was insensitive and tacky, given Poe is running for the presidency in a country suffering acute poverty and inequality.

Brian was spotted wearing 2011 Limited Edition Nike Mag 10 shoes, designed after Marty McFly’s futuristic kicks from the 1989 film Back to the Future Part II. The sneakers fetch up to $37,000 in auctions.

Poe defended her son, saying “He saved up for…a long time. Even if assuming I was not agreeable to it, it made him happy.

“He has a right to it. Why should we stand in the way? He is a private citizen who deserves his privacy.”

Brian apologised for offending the public, explaining “It was never my intention to upset anyone. I just wanted to buy myself something after saving up for months.”

In a country where the average family earns $6,500 per year and manages to squirrel away only around $1,200, saving up for Brian’s sneakers would take the better part of three decades, if not longer. By that time, hoverboards might actually exist. Mish Khan is New Mandala’s Associate Editor and a third-year Asian studies/law student at the Australian National University. This article is part of her regular Southeast Asian snapshots.