Thailand’s previously outright dictatorship is now wearing a fig leaf of parliamentary democracy. After being on “freeze” for five years, politics is heating up again and the country seems more divided than ever—but along what lines?

With Pheu Thai’s relatively lacklustre performance in the recent elections, as well as the emphatic arrival of Future Forward, some analysts claim a shift has occurred in Thailand’s troubled politics.

“The era of Red versus Yellow is over,” proclaimed Andrew MacGregor Marshall shortly after May’s election. “Now the conflict is clearer—democracy versus dictatorship, freedom versus royal worship, the future versus the dinosaurs.”

A recent op-ed by former Australian ambassador James Wise concurred, declaring the end of “Red versus Yellow” politics and the emergence of “two new poles: pro-military or anti-military.”

And in a Bangkok Post column, political scientist Thitinan Pongsudhirak argues that the “newer fault lines are generational and ideological in orientation”. If the generation gap is not sufficiently bridged, Thailand is headed towards “a different kind of conflict, no longer centring on Thaksin and his opponents, but between people who grew up during the Cold War and those who were reared in the 21st century.”

The above statements offer insufficient explanations, not only of what Thailand’s political crisis was about during the so-called “Red versus Yellow” era, but what it will continue to be about going forward—because nothing has substantially changed.

The Red Shirts are reviled by many Thais, who consider them an “infection of the Thai moral-political body”. It is attractive for these Thais to declare an end to the era of “Red verses Yellow”, because it means the “virus” has been cured and all is well again in the country. Meanwhile for outside observers, the depth of hatred towards the Red Shirts, their association with Thaksin, and the willingness of a minority of the movement to engage in violence has made it difficult to bestow on them the morally-affirming title of “democracy movement”. The desire to wade out of these muddied waters and search for a clearer view is understandable.

But the Red Shirts have always been about electoral politics and representation—the same “democracy versus dictatorship” cleavage that commentators argue has fractured Thailand since the election. From their origins as a broad church opposed to the 2006 coup, on to their days opposing the questionable transfer of power to Abhisit Vejjajiva in 2008–11, then ending with their last mass rally to support the embattled Yingluck government at Aksa Road in 2014, the movement has always been fighting for these most basic necessary conditions for democracy. That a significant portion of society has pushed back so hard against the movement reveals a deep schism in Thai society, splintered along two divergent visions for the country.

On one side are those who wish for Thailand to be a nation-state in the modern sense, with all citizens having equal rights guaranteed by a constitution, to which even the monarchy is bound. State institutions, such as the courts, civilian bureaucracies and the military are to serve the public by administering the laws and policies of elected representatives.

On the other side are those who cling to vestiges of the past, with the monarchy at the centre of Thai life and those in its orbit enjoying an exalted status. The “servants of the king” (ข้าราชการ) in the vast bureaucracies run the country at his behest and secure certain privileges in doing so. So too does the military, which retains a special prerogative to involve itself in politics. From this perspective, the concept of the Thai nation is not, to quote Benedict Anderson, one of “deep, horizontal comradeship” but a vertical hierarchy, in which some Thais are considered inferior to others. This is especially true of those from peripheries like the north and the northeast, which were once tributary states of Siam.

Naturally, these two competing visions—equality in representation, and a hierarchy of rule—overlap to a large extent with other cleavages in Thai society: centre/periphery, urban/rural, affluent/ lower income, state employee/informal sector, etc. The so-called “Red versus Yellow” era of Thai politics has been variously—and correctly—described as a regional, ethnolinguistic and class-based divide.

But while these are accurate descriptions of the fault-lines, they tell us nothing about what made these divisions political and explosive: no less than the aforementioned ideological struggle over who gets to influence and be represented in national politics, and the form of political system that might facilitate that inclusion and representation.

So is the era of “Red versus Yellow” over? Arguably, it has been over for almost ten years already, since the yellow-shirted People’s Alliance for Democracy faded into insignificance and was superseded by other royal-nationalist groups, like Dr Tul Sitthisomwong’s “multi-coloured shirts”, General Boonlert’s Pitak Siam and Suthep Thaugsuban’s whistle-blowing People’s Democratic Reform Council. But regardless of what colour they actually wore, these movements were all cut from the same “yellow” cloth.

It has also been many years now since a mass-mobilisation of Red Shirts took to the streets. But the movement has remained active as a social club of sorts, organising frequent gatherings at its hub in Bangkok’s Imperial Lad Prao mall. Smaller, local chapters and informal groups also meet regularly around the country. Unlike their “yellow” counterparts, the Red Shirts never felt the need to “rebrand” and the “red” identity has remained strong in the minds of many who took part in the movement. The red t-shirts they wore, the membership cards they carried and other paraphernalia have been carefully stored, kept away from the prying eyes of any military officers who might pay an unwelcome visit.

If the movement never rallies under the red banner again, it hardly matters. Any future mass political mobilisation will feature many of the same faces who made up the Red Shirt crowds, just as it was with the various incarnations of the royal-nationalist movements. And the two sides will still be rallying around the same two competing visions of Thailand described above, which remain unresolved.

It’s easy to see why Future Forward Party and the new generation of democracy activists in its orbit are more attractive to observers than the Red Shirts. They are youthful, well-educated, urbane and creative. The party leadership is charismatic and untainted by scandal and baggage from the past. It is also more cosmopolitan in its outlook and better able to articulate its platform to an international audience.

But Future Forward has always had a closer relationship to the Red Shirts than many would like to admit, evidenced by the ease with which it formed a “democratic bloc” with Pheu Thai after the election. The royal-nationalists are well aware of this, which is why the party and its supporters are on the receiving end of venom previously reserved for the Red Shirts and Thaksin.

It’s true that Thailand’s existential angst has broadened to include a new demographic. A curious feature of the earlier stages of the conflict was that most of the protagonists on both sides were well into their 50s and 60s. In their youth, many of them were part of a generation touched deeply by the political upheaval of the 1970s, reminding us that the struggle over Thailand’s identity is not new. Younger Thais in the 21st century seemed to take little interest in politics—until now.

Yet it’s also inaccurate to say Thailand is on the cusp of a generational conflict. How can it be when the older generation remains deeply divided amongst itself? Young Thais aren’t rebelling against the older generation per se but are opposing the backwards vision of the royalist-conservatives. And by coalescing around the more progressive of the two competing ideologies, they have ended up as fellow travellers of the Red Shirts. This unlikely alliance goes back to the early protests of the youth-led New Democracy Movement in 2015, which were attended by student activists and older Red Shirts in equal measure. The kinship is still evident today, such as when political hip-hop group Rap Against Dictatorship are handed flowers by adoring Red Shirt “aunties” more than twice their age.

The success of Phalang Pracharath and Future Forward in the recent election suggests the middle ground is collapsing, as more Thais flock to new parties embodying different visions of Thailand more emphatically than before. Despite serious question marks over the election, it’s clear many Thais did vote for the pro-junta party. This suggests a hardening of attitudes among the royal-nationalists, whose sense of ontological security has been threatened by decades of societal change, the trauma of the recent political turmoil and the passing of King Bhumibol. 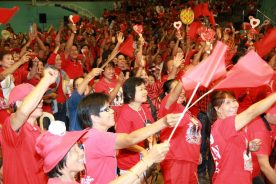 Despite much wishful thinking, it’s clear now that the arrival of Future Forward does not provide neutral ground or a way out of the conflict. On the contrary, the party’s youthful ideology and past associations with campaigns critical of the lese majeste law come across as radical and provocative in the context of Thailand’s ideological schism. Yet its strong performance in the election shows an appetite among some Thais for this type of politics, which has infuriated the royal-nationalists and exacerbated the crisis.

The arrival of a new, youthful politics has been evident for some time. Even before Future Forward Party arrived on the scene, political opinions were being printed on t-shirts, spray-painted on walls and belted out in song lyrics. Young creatives and influencers led the way, making it easier for others to follow. Living for five years under “Uncle” Prayuth’s military rule was just so uncool that the cool kids had to rebel. And the royal-nationalists were so aggressive, unreasonable and shameless in their determination to push their vision of Thailand on the rest of the country that they alienated a large section of the Thai youth in the process.

Some analysts have wondered whether—if parliamentary means fail, which seems likely—the newly politicised youth could be mobilised for protests. A better question would be: how successfully could a pro-democracy alliance of “futuristas” and Red Shirts be mobilised? Such a cross-class, cross-generational movement certainly seems possible nowadays.

The “Red versus Yellow” era isn’t quite over in Thailand, at least not in the sense of the core issues that divide the two movements. The underlying causes of Thailand’s troubles have not changed. But a new “Red and Orange” alliance might be in the making—and it could have far-reaching consequences if it transpired. 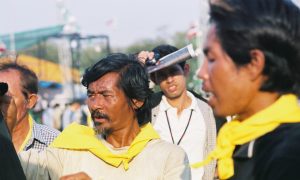 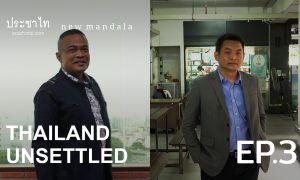