Update, 25/10/2017: this post was written shortly after the issuance of an emergency decree on mass organisations (Perppu Ormas) by Joko Widodo in July 2017. On 24 October 2017, the Indonesian parliament voted to approve the decree, and its provisions now form part of Indonesia’s Law on Mass Organisations (UU Ormas).

On 10 July, Jokowi signed a Regulation in Lieu of Law (Peraturan Pemerintah Pengganti Undang Undang/Perppu) amending the 2013 Law on Societal Organisations (UU Ormas). In doing so, the president has mounted a serious attack on legal protections of freedom of association in Indonesia.

In assigning sweeping powers to the Minister for Law and Human Rights to ban any organisation deemed to oppose the official ideology of Pancasila, or ‘national unity’, Jokowi has placed the legal existence of every NGO and civic organisation in Indonesia at the mercy of a unilateral executive decision.

The Perppu is required by law to be either made permanent or disallowed by the Indonesian parliament (DPR) within its next sitting period (within three months from 16 August). If confirmed by the parliament, the new legislation could be a formidable tool of political repression in the hands of any future authoritarian president. Indonesian civil society should collectively oppose this move, and support efforts to challenge its constitutionality. Political parties represented in the DPR should refuse to approve the Perppu.

The government’s rationale for the Perppu was outlined in a statement by Coordinating Minister for Politics, Law and Security, Wiranto. It read that the 2013 UU Ormas “is no longer sufficient as a means of preventing the spread of ideologies opposed to Pancasila and the 1945 Constitution of the Republic of Indonesia”, and that the Law’s “understanding of teachings and actions that contradict Pancasila are narrowly formulated, i.e. they are only limited to teachings of Atheism, Marxism and Leninism, whereas Indonesian history proves that other teachings can also replace and contradict Pancasila.”

On that basis, the statement continued, the government was justified in exercising its power to enact Perppu in times of emergency or to fill a “legal void” or kekosongan hukum. The statement also included the reassurance that “it must be underlined that this Perppu is not meant to discredit Islamic organisations, let along the Muslim community, which forms the majority population in Indonesia.”

The last of these remarks undoubtedly alludes to the government’s recent announcement of its intent to dissolve Hizbut Tahrir Indonesia (HTI). On 8 May, Wiranto announced to the public that the Indonesian government proposed to ban HTI—a legally registered association—on the grounds that its mission is not compatible with the 1945 Constitution and Pancasila and is therefore in violation of UU Ormas.

There will certainly be plenty of analysis of the political background to the Perppu to come, and why the government was so eager to remove the legal barriers to banning HTI by issuing this Perppu. What’s important now is to highlight just how serious an assault on legal protections of freedom of association in Indonesia the Perppu represents.

Broadening the definition of ‘anti-Pancasila’ activity

The Perppu is essentially an amendment-by-decree of Law No.17/2013 on Societal Organisations (Undang Undang Organisasi Kemayarakatan/UU Ormas). UU Ormas requires that the basic principles of any registered civil organisation should not contradict Pancasila (Article 2). This provision itself is incompatible with the guarantee of freedom of association contained in Article 28E of the Indonesian Constitution, as well as Indonesia’s international human rights obligations as a state party to the International Covenant on Civil and Political Rights (ICCPR).

What is alarming about Perppu 2/2017 is that its key provisions remove the legal checks on the executive’s power to sanction or proscribe organisations that existed in UU Ormas. The Perppu both expands the grounds on which an organisation can be declared to be at odds with Pancasila—and hence a candidate for dissolution—and strips out any role for the judiciary in overseeing a government’s decision to suspend a group’s activities or revoke its legal status.

Article 59 of the Perppu strengthens the grounds for dissolution of organisations, specifically allowing organisations to be dissolved if they are found to be:

This is on top of the existing provisions of Article 59(4) of UU Ormas, which prohibit organisations from “holding, promoting, as well as disseminating teachings or concepts which contradict Pancasila.”

In practical terms, the Perppu may reduce the space for political activists or dissenters in places like Papua and Maluku to peacefully advocate for referenda, independence, or political solutions in ways that do not involve incitement to discrimination, hostility, or violence. Both these areas have a history of pro-independence movements where peaceful political activism is already severely restricted.

Article 59(3) of the Perppu deletes the provision of UU Ormas that governments should “engage in efforts at persuasion before applying administrative sanctions upon organisations that commit violations as stipulated in Articles 21 and 59” as a first resort in disciplining an organisation thought to be in violation of the Law. Instead, under the Perppu, any organisation deemed to violate the terms of its Article 59 will be immediately subject to administrative sanctions.

Articles 62–80 of UU Ormas set out a lengthy legal procedure by which the government had to apply these sanctions. This began with providing multiple written warnings, followed by temporary suspension of public grant money, or temporarily freezing the organisation’s activities for up to 6 months. Under the elucidation to Article 61(c), “activities” specifically did not include internal activities such as internal meetings.

Depending on whether an organisation was operating at the regional or national level, governments also had to seek the legal opinion of the Supreme Court or local parliaments, police and prosecutors before suspending its activities. The final, most serious step of revoking an organisation’s legal status could occur only with a court’s approval (Article 68), and the government was required to provide evidence that it had exhausted all of the above administrative sanctions (Article 70 Paragraph 3 and 4).

The Perppu strikes out every one of these articles of the UU Ormas in one fell swoop, dramatically simplifying the process by which the government can ban and dissolve an organisation, and removes any role for the judiciary in approving or supervising this process.

Under the Perppu’s provisions, the Minister for Law and Human Rights need only issue a written warning once to an errant organisation (Article 61 Paragraph 1). After a period of 7 working days, the minister can directly freeze its activities (Article 61 Paragraph 2).  The Perppu also deletes the elucidation of UU Ormas Article 61(2) that excludes internal business from the freeze; under the Perppu, even internal meetings are illegal while an organisation’s activities are frozen.

If the organisation does not comply with such an order to suspend its activities, the minister may revoke the organisation’s legal status (Article 61 Paragraph 3). There is no provision in the Perppu for an organisation subject to sanctions to challenge the government’s decision at any stage.

It is possible that a Letter of Decision (Surat Keputusan/SK) issued by a minister to ban or disband an organisation could be challenged in the State Administrative Court (Pengadilan Tata Usaha Negeri/PTUN). But the basis of the challenge could only be whether the minister has followed the procedures for banning a group as laid out in the Perppu—it is not clear whether a PTUN could second guess the reasoning of the government in deeming an organisation to be “anti-Pancasila”.

UU Ormas made no mention of criminal penalties for any person for leading or being a member of an organisation banned under its provisions. It contained only a general provision (Article 81) that members of organisations who individually or collectively committed crimes should be prosecuted according to existing—by implication, other—laws and regulations. Until now, being part of a suspended or disbanded organisation has not in itself been a criminal offence.

Alarmingly, the Perppu introduces the possibility of criminal penalties for members of organisations judged to have engaged in activities deemed illegal according to the UU Ormas as amended by the Perppu.

For example, the Perppu’s Article 82A sets out the penalties for membership of ormas deemed to violate various provisions of Article 59 (see our discussion of this above). For instance, members and administrators of ormas which commit “acts of hostility” or blasphemy can be imprisoned for between 5–20 years, or even for life. Significantly, “acts of hostility”, according to the Perppu’s amendments of UU Ormas’ elucidation of Article 59(3), include any “speech, statement, attitude, or aspiration, either verbal or written, via electronic or non-electronic media, that causes hate, either against certain groups or any person, including state administrators.”

Meanwhile, Article 82A stipulates that membership or leadership of organisations which commit acts of violence, vigilantism, or vandalism may be imprisoned for only 6–12 months.

Such harsh penalties merely for being a member of an organisation deemed to violate Article 59 are deeply concerning on human rights grounds, given the apparent ease with which the Perppu will allow the government to sanction and proscribe organisations. Moreover, it is not clear from Article 82A of the Perppu whether an organisation must be formally sanctioned under Articles 60, 61, 62, or 80A before its members are liable to be prosecuted criminally. Nor is it clear who determines whether an organisation is in violation of Article 59 for the purposes of applying criminal penalties under Article 82A.

A threat to Indonesian civil society

It is important to stress just how wide-ranging an effect this Perppu has on the legal rights of Indonesian civic organisations. The definition of an ‘Ormas’ under Chapter IV of UU Ormas includes basically every civic organisation in Indonesia—from Amnesty International to Nadhlatul Ulama to the supporter groups of many political parties. 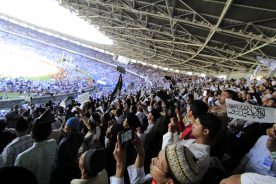 Consider the possible scenarios if the Perppu is converted to permanent law by the DPR. What if a future government deems an NGO campaigning for LGBT rights to be a threat to “values of religion, culture, morals, ethics, and norms of decency” under Article 21 of UU Ormas? What about a think tank advocating on Papua issues that a minister deems to be promoting separatism? There would be no meaningful legal roadblocks for the executive to declare such organisations illegal, and possibly seek to imprison their members.

One option that is being pursued by Hizbut Tahrir Indonesia is a challenge to the constitutionality of the Perppu in the Constitutional Court (Mahkamah Konstitusi/MK). Such a challenge may raise the issue of whether the Perppu was a genuine response to an emergency situation (which the MK has previously ruled has to be present for the decision to issue a Perppu to be valid), or whether its contents violate the Indonesian Constitution’s protections of freedom of association (Article 28E).

There are many ways for the Indonesian government to combat radicalism and defend social cohesion. Removing almost all meaningful legal protections of freedom of association is not the way to do that. Indonesia’s pluralist politicians and civil society are understandably deeply antagonistic towards the anti-democratic mission of groups like Hizbut Tahrir Indonesia. So are we. But we should recognise that the same laws that protect HTI from arbitrary state action are the ones that protect the forces of democracy and human rights as well.

Usman Hamid is the Director of Amnesty International Indonesia. He holds a law degree from Trisakti University and completed an MPhil at the Department of Political and Social Change in the ANU’s Coral Bell School of Asia Pacific Affairs. Liam Gammon is a PhD Candidate at the ANU’s Department of Political and Social Change, and is the editor of New Mandala.