Jokowi’s military reshuffle is all about 2019

In the space of just 6 days, Indonesia has nominated, approved, inaugurated, and officially handed over its military command to a new Armed Forces Commander. A sign that President Joko Widodo (Jokowi) has made a decisive move to get the military onside early in the lead up to Indonesia’s regional elections in 2018, and the presidential elections in 2019.

The instalment of Air Chief Marshal Hadi Tjahjanto as the new Panglima (Commander) of the Indonesian National Armed Forces (TNI) was no surprise to military observers of Indonesia. Hadi has long been predicted to replace General Gatot Nurmantyo as TNI commander since his promotion to Air Force Chief of Staff. The president at lunch with his new military chief at the Bogor Palace, 13 December 2017. (Photo: Presidential Staff Office on Twitter)

Hadi’s connection to Jokowi dates back to when he served as Commander of Adi Soemarmo Air Base in Solo, where Jokowi served as mayor from 2005 to 2012. Since Jokowi was elected president, Hadi’s career has been fast-tracked towards the top commander job. In 2015, Hadi was promoted to presidential military secretary and his rank was increased to a two-star Air Vice Marshal. In 2016, Hadi was then promoted to Defence Ministry Inspector General and his rank was increased to three-star Air Force Marshal. In January this year, Jokowi then increased his rank again to four-star Air Chief Marshal, when he was promoted to Air Force Chief of Staff—this final appointment making him eligible for nomination as Panglima.

What was a surprise to observers, however, was the speed of Hadi’s appointment process. It was expected to take at least a month from nomination to approval by Indonesia’s parliament (DPR), and even longer for Hadi to be officially inaugurated and handed command of the TNI. However, Hadi was nominated by Jokowi on 4 December, a Monday, and he was approved by the DPR—with no opposition—the following Thursday. He was then inaugurated late Friday night, and officially took over command on Saturday morning. It was clear that Jokowi wanted Hadi to replace Gatot much quicker than previously thought.

Jokowi had long been weary of Gatot’s conduct as commander. Gatot repeatedly provoked controversy, through his outlandish public lectures to university students, his unilateral decision to suspend some aspects of defence cooperation with Australia, and the inaccurate disclosure of classified reports about the importation of 5000 military-grade weapons illegally by a non-military organisation. Gatot was also assumed to harbour political ambitions ahead of the 2019 presidential elections, making him not only a political liability for Jokowi, but also a potential rival. Indeed, there has been speculation over the last few months about Jokowi neutralising the latter possibility by choosing Gatot as his own running mate. But Jokowi’s decision to replace Gatot was more than just about Indonesia’s highest ranked general having post-service political ambitions. If this was the case, Jokowi could have extended Gatot’s tenure until after the next wave of simultaneous regional elections, scheduled for June 2018, and even extended his tenure closer to the presidential election in April 2019. This would have limited Gatot’s time to find partisan backing in time for the candidate registration deadline. But it appears that Gatot was considered more of a political threat the longer he remained in command of the military.

Gatot’s poor job performance was also not what motived Jokowi’s decision to move him on. Jokowi had ample opportunity to replace Gatot on grounds of incompetence. In addition to already causing issues in the Australia–Indonesia defence relationship, it was clear that Gatot had issues with the superior authority of the Defence Ministry in budgeting and planning matters, a sign that Gatot was not getting along with Defence Minister Ryamizard Ryacudu. This was despite both men having an army background and the fact that the Defence Ministry and the TNI were in the hands of two army generals for the first time in 15 years.

Then in May, Jokowi was requested by an NGO to review Gatot and Ryamizard regarding poor performance in their policy areas and efforts toward military reform. By September, there was also a significant opportunity to replace Gatot after public calls for Jokowi to evaluate his position for leaking classified information regarding the weapons importation debacle. The reason why Jokowi did not replace Gatot at anyone of these opportunities was probably due to Gatot’s popularity, and that all this controversy occurred before the political picture for the upcoming regional elections was clear.

Gatot’s replacement with an Air Force Chief Marshal was also not about restoring the post-1999 tradition of leadership rotation amongst the three services—Army, Navy, Air Force—for the top commander position. Jokowi had no problem being the first democratically elected president to break this tradition. Gatot’s original appointment, which followed the appointment of former army general Ryamizard as Defence Minister, was deplored by human rights activists, but was well understood as an old political move to gain control and solidify Jokowi’s power base by installing strong military men linked to the army in important security portfolios. Jokowi’s decisive decision to switch military commanders was therefore likely part of a move to consolidate his power over the military ahead of the upcoming elections. On the surface, it appears to be a risky move, as the change in leadership (which now favours the Air Force) risks increasing the historical inter-service rivalry ahead of the next regional elections. Indonesia’s army still has strong political influence at the regional level due to its territorial structure across the entire archipelago. Hadi’s fast-tracked career path has also allowed him to surpass the more senior service Chiefs of Staff, General Mulyono (Army) and Admiral Ade Supandi (Navy), both graduates of the Command and Staff College before Hadi, making him envied not only by the other more senior officers from competing services, but also by the more senior and experienced officers within his own service.

The upcoming regional elections in mid-2018 will thus be an important test for Hadi, as these elections will involve recently retired officers from competing services running as political candidates. The most influential of these will be Lieutenant General Edy Rahmayadi, the soon-to-retire commander of Kostrad, the Army’s prestigious strategic reserve. Edy will be running for the governorship of North Sumatra with the support of three political parties—the nationalist Gerindra, and the Islamic PKS and PAN—the first two of which are members of the opposition to Jokowi’s governing coalition.

The other example is Navy Colonel Abdul Rivai Ras, head of the Maritime Security Study Program at Indonesia’s Defence University, who intends to contest the governorship in South Sulawesi. Rivai is still lobbying for party support, with the expectation that Gerindra and former general-turned-president Susilo Bambang Yudhoyono’s Democrat Party will back him. Gerindra is Jokowi’s main opposition party, chaired by another former general, Prabowo Subianto, whom Jokowi defeated in the 2014 presidential elections and who remains his most formidable rival for the presidency in 2019. Yudhoyono’s Democrats remain ostensibly neutral, but hold a substantial number of seats in the national parliament, and have the potential to form a third coalition if it can attract some of the minor parties. This would give them the ability to nominate a third presidential candidate in the upcoming election. Jokowi will want to avoid these former military political candidates from using their military connections to bolster the opposition’s hold over regional governments ahead of 2019.

So the first reason for Hadi’s rapid instalment was therefore about timing. By replacing Gatot early, Hadi will now have nearly 7 months to make the transition and prevent the military from influencing the upcoming regional elections, and over a year to further consolidate his position as the TNI Commander ahead of the presidential elections. Hadi’s high-level rotations under the president’s purview indicate that he has been well groomed to understand the needs of Jokowi, has the proven ability work with the other service Chiefs of Staff, and will likely continue to build his working relationship with Defence Minister Ryamizard.

The other significant reason for the quick replacement of Gatot was to prevent him from appointing his supporters to important leadership positions before he was set to retire in March 2018. On the same day as Hadi’s nomination, Gatot implemented a massive leadership rotation of 85 officers, the second major leadership rotation in a matter of months. The first leadership rotation did not receive much pushback, as the key appointment was Major General Tatang Sulaiman as Army Vice Chief of Staff. Tatang has fallen into Jokowi’s political circle since his previous promotion as military spokesman, and then as regional military district commander in Central Java, where he was tasked with securing the recent wedding of Jokowi’s daughter. Tatang’s promotion to Vice Chief of Staff puts him next in line for the Army Chief of Staff position when Mulyono retires in 2019, potentially allowing Jokowi to further consolidate his allies’ hold on the army.

However, the more recent leadership rotation was more controversial with the instalment of the outgoing Kostrad Commander Edy Rahmayadi’s replacement, Major General Sudirman. Sudirman was the former head of the Sriwijaya Military Command in southern Sumatra, and is reported to be Gatot’s protégé. This would have placed a pro-Gatot commander in charge of Indonesia’s major fighting force ahead of upcoming elections involving retired generals allied to Gatot. The rotation was later stalled pending Hadi’s approval, after it was clear he would be the next Commander of the TNI—a sign that Jokowi was not happy with Gatot’s last attempt to manipulate the strategic command of the military to favour his potential post-service ambitions. It is likely that some of these important military leadership positions will now be changed to favour Hadi’s allies—and thus Jokowi. All smiles: Gatot and Hadi after a handover ceremony in Jakarta, December 2017. (Photo: Pusat Penerangan TNI on Twitter)

With Hadi in the top position beyond 2019, Jokowi has a better chance of keeping the military onside ahead of the elections, despite his non-military background. Although active TNI soldiers are not eligible to vote, their families are, and the political party the backed Jokowi in 2014—the Indonesian Democratic Party of Struggle (PDI-P)—polled poorly in the military housing complexes with active soldiers. Prabowo was able to win the majority of these votes, making them an important voting group in the event of another close election. Thus, Jokowi’s instalment of former army generals in important cabinet portfolios and with the military senior command more under his control, this should provide a much better chance of winning these important votes, in addition to the votes of retired TNI soldiers. Being close to the military will also help protect Jokowi’s nationalist image at a time when the fear of Communism in Indonesia has reached a new peak.

Jokowi’s decisive move may also prove to be a worthwhile strategic political manoeuvre, limiting Gatot’s influence in the senior ranks of the military if the former commander runs as a vice-presidential candidate on a rival ticket, or if Gatot does manages to secure the party support needed to run for the presidency in his own right. In shifting Gatot off the front lines of politics, Jokowi has demonstrated that he remains an astute political actor. 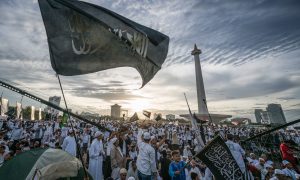