'Supporters march on the streets of Yangon on December 9 as Daw Suu attends public hearings in the Hague.' Photo credit: Matthew Sebonia

One day last month, I stopped by Auntie’s shop on my way home from the village and was greeted with unusual urgency. “You’re here!” My friends cheered in Burmese, “good, you can translate!” They pulled me off my motorcycle, past hanging shampoo packets and the piles of snacks, and into the back of the shop, where cousins were huddled around a small TV. This family had lived next to me when I first moved to the small town of Kalay for research in September 2018. They fed me constantly, stroked my thin blond hair and rough white skin, and brought out Myanmar Beer and tea leaf salad when my guests showed up. On the screen was a white man in a curly white wig, pontificating in English. My friends complained about the Burmese translation, which was punctuated with long pauses and unintelligible English phrases. I listened, and quickly realised the problem: I was watching Myanmar’s international lawyers defend the country against accusations of genocide at the Hague in a highly technical legal argument about precedent and standings. I would have had difficulty explaining the details in plain English; the simultaneous translator didn’t stand a chance. I told my friends that the lawyer was using yone zaga, office talk, but that he was saying, roughly, that the Gambia did not have the right to bring the case. Aunty asked me if this guy was on their side or the other side. I looked again at the funny white man on the screen. He’s on Myanmar’s side, I said. Thinking to lighten the mood but not knowing the word for “wig,” I added, “and he has… fake hair.” “Fake hair!” Auntie’s daughter shrieked, “that’s terrifying!” We burst out laughing.

The International Court of Justice will rule on the Gambia’s request for provisional measures to prevent genocide in Myanmar later today. The decision will affect the fate of hundreds of thousands of Rohingya suffering in camps in Cox’s Bazaar and Rakhine State. It will also serve as a judgement on the legitimacy of Myanmar’s democracy. The Court’s ruling will not directly affect the white men in wigs and other international lawyers who won or lost the case, but it will shape the everyday lives and political possibilities of Myanmar people.

For most of the years I have worked in Myanmar, first as a development worker and then as a researcher, ignoring the Rohingya crisis would have been surprisingly easy. Brutal violence and nasty racist politics have a long history in Myanmar. To survive, people compartmentalise. There were no Rohingya in Kalay to worry about; farmers spent their stress on comparing the price of rice and considering migration opportunities for their children. When hundreds of thousands of Rohingya fled assault after the 2017 ARSA attacks, I was surprised and disappointed that most of my Yangon activist friends stayed quiet. But I understood their calculation. Many had taken huge personal risks and built careful coalitions to fight for a specific cause. They feared, with good reason, that speaking out would destroy what they had worked so hard to build. Staying silent might have been morally wrong, but it was logically right. 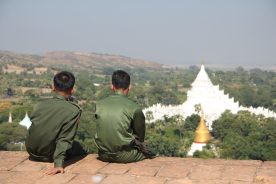 The ICJ case changed all this by thrusting the genocide into daily life. Much to the distress of the international community, the State Councilor, national hero and former global human rights icon Daw Aung San Suu Kyi, was headed to the Hague to defend Myanmar. Her government rallied support. As I conducted interviews with local officials and farmers around Kalay in early December, my husband sent me videos of the touq pan bwehs, shows of support, on the street outside our Yangon apartment. Hundreds marched with signs saying “we stand with her.”

As the same signs popped up around Kalay, my friends began to talk. I heard grassroots organisers and village know-it-alls start to analyse the situation, pointing out, for example, that the case was not against the people of Myanmar, as the government allowed the population to believe, but rather against the generals. A friend mourned Daw Suu’s fall from grace, wishing that the rally signs said, “We stand with her and we stand with justice,” instead of pitting the two against each other. Some of my brave friends in Yangon took action, staging anti-genocide protests and distributing booklets in Burmese explaining the meaning of the term. A critical consciousness was emerging.

But for people like Auntie and her family, all this still comes down to defending Daw Suu. “She looks so old,” Auntie told me as we watched that day in her shop, “she seems exhausted. Poor thing. But she has such capability.” Auntie was a sharp businesswoman herself, issuing orders with one hand on the cash box, but her health was flagging due to a botched operation two decades earlier. The Myanmar government had never given her anything, and the ICJ pageant was similarly distant and threatening, but she believed in this woman who fought for something different, something called democracy.

When I asked them what I had missed, Auntie’s son explained to me that Daw Suu had already spoken, and that she had explained the long history that had harmed the people of Myanmar. “What she said was very clear,” Auntie added. “This guy, I can’t understand at all.”