In the early 21st century, we see that a good part of the world is turning its back on diversity – and this goes beyond Southeast Asia. We see this in Europe, in India, and in the Americas. This trend manifests as a poisonous concoction of intolerance, ethno-nationalism, anti-immigrant sentiments, and populism. Globalization has contributed to this trend, as well as long-running religious enmities. One very good example of this trend is the ongoing Rohingya crisis.

The triumph of democracy following the end of the Cold War was expected by many across the world to usher in a free and golden age, but unfortunately it was not to be. A new genre of ‘democratic’ leaders came to the fore. To them, democracy was about elections, and that meant getting as many votes as you could, through any means. The two currents of democracy and intolerance intermingled and fed on each other, and far-right parties and governments came to power. Diversity is downgraded or denied outright.

The illiberal turn in a number of Southeast Asian countries, while being aimed at maintaining and expanding a party’s grip on state power, has been accompanied by intolerance, discrimination, repression and outright violence against what is essentially pluralism. The ruling National League for Democracy party in Myanmar has only token ethnic minority representation and none of its lawmakers are Muslim. Opposition parties, dissenting media and civil society are facing severe threats from incumbent establishments. Institutions of the dominant religion are taking on a bigger role in politics—sometimes in tandem or in collusion with the state. The primacy of the vote over that of the gun was regained at great cost. But now it means that political leaders are pandering more to interests of race and religion to get votes.

I have been describing the dual state in Myanmar for quite some time. Taking a deeper look, I would further elaborate by calling it ‘twin authoritarianisms’ or ‘authoritarianisms-in-tandem’: the civil as well as the military. It may sound unlikely, given that any authoritarian state is usually a monist entity. This shows that neither of the twin blocs are strong enough to obviate the other. But both sides come down hard on anything else they deem to be standing in their way – the media, minorities, civil society, activists and protesters.

For the Myanmar military that enjoyed near-absolute power for half a century,  authoritarian and illiberal traits come naturally. One local analyst observes that at least the military is more consistent. But for the National League for Democracy, which spent the past three decades clamouring for all the noble virtues, its recent descent to baser sentiments comes as a rude shock to many (this writer excepted). All the institutions regarded as pillars of, and adjuncts to, liberal democracy are now under threat. If someone were to question the party on this, the blame would be glibly passed on to the obstructionist military. Of late it has become my task to gently disabuse people – both within the country and abroad – that this is not as neat as it sounds. The civilian party government has to shoulder part of the responsibility.

I have used the term ‘post-ideology’ to describe present-day Myanmar. In a country where the Left had been such a potent force, it is now difficult to identify a meaningful political party that can be classified as leftist. The Burma Socialist Programme Party in its later years cannot be seen as left anymore, and the Communist Party of Burma collapsed in 1989. In the absence of a sophisticated leftist politics, the way opened up for a swing to the Right. One sees parallels of this in Eastern Europe.

A further outcome is the rise of majoritarianism and the dawn of an electoral democracy. With an antiquated first-past-the-post electoral system, the politicians and generals know very well that if you have the ethnic and religious majority sewn up, you do not have to bother much about either election outcomes or the minorities.

The consequences of all these trends are many. With the collapse of ideology, the 70-year long civil war is now being waged against ethnic minorities. In other words, it has turned into a straight ethnic war. One sees in Rakhine, and for long in Kachin and Shan states, the accompanying disregard for civilian lives and the depths of brutality.

The Bamar government’s and military’s premise is that “a rising Bamar tide will lift all ethnic boats”, but in reality, that isn’t the case.

Now at the end of the second decade of the 21st century, the NLD government is dutifully carrying on what had been done since the one-party state—rolling out the outward trappings of ethnic diversity and ‘unity’ on certain dates like Union Day. But members of the ethnic minorities have come to realize, painfully in recent years, that these gestures are empty and devoid of meaning. Some of these people are starting to point out that the NLD and military are acting in collusion. 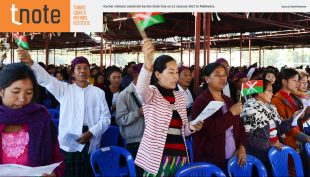 First of all, the powers-that-be have to acknowledge that ethnic diversity is as fundamental to Myanmar as is the Irrawaddy River. And just as useful. Influenced by the ethnic rebellions, the central state, and especially the military, sees ethnic identity as a threat. Their solution is assimilation, as China is attempting to do with the Uighurs. There has to be a sea-change in this perspective. But Naypyidaw is not a place known for its intellectualism, nor, should I add, for its leadership.

Myanmar civil society came to the fore a little before the current ethnic unravelling began. With the paucity of state efforts, civil society may turn out to be the only lifeline. But essentially on the all-important issues of pluralism and diversity, the state and society have to see the error of their ways, and change. The task also needs to be taken up by intellectuals—writers, historians, film-makes and the media. The democracy promotion outfits also need to change tack—less emphasis on elections and more on pluralism and what are called ‘emancipative values’.

The expectation since 1988 had been that the NLD government would liberalize Myanmar: this has not happened. Progress towards a more liberal Myanmar has been glacial. The generational divide has quite a bit to do with it—the Union Solidarity and Development Party and NLD leadership are from the same generation, and from the Bamar Buddhist majority. Even if objectives like constitutional amendment are achieved, allowing, for instance, winning ethnic parties to form governments in their own states, it will not be a panacea.

Bamar ethnic dominance, transposed to the political sphere, leads to a simplistic motto: “We are a democracy now, and so votes count. The more voters we have, the better. Diversity isn’t important.” The two major parties are essentially Bamar-dominant, with token minority representation. The large number of non-Bamar parties comprising members of single ethnic groups is testimony to the fact that the non-Bamar nationalities prefer to go their own way instead of teaming up with either of the two major parties. So where does that leave us with regard to building a federal system, a multi-ethnic nation, and a pan-ethnic national identity? These goals appear to be far beyond the horizon.

What Aung San Su Kyi and Senior General Min Aung Hlaing have in common is the determination to concentrate power in themselves and to close decision-making. There are strengths and weaknesses to this. It could bring success as well as failure. Myanmar’s present case inclines towards the latter. And fortune isn’t exactly smiling on either of them now. At the same time, both have strong survival and self-perpetuation instincts, and they have the organizational machinery to this end. The NLD for one will use all means at its disposal to win the next elections.

Myanmar’s political leadership is characterized by hierarchy, gerontocracy, and its reactionary nature. Post-2015 this seems to have become even more marked. The two leaders are also in their sunset years, and the best thing they could do now is to acknowledge reality and think about the legacy they shall leave behind.

We are staring at the fact that older generations are failed generations, and I would put the point of demarcation at age 45. (Someone posted a list of current cabinet ministers and their ages and it entirely fits the description of gerontocracy).

As Myanmar moves into the closing years of the NLD’s term of office, the two leaders—ASSK and Min Aung Hlaing—share the unenviable distinction of having together pushed the country further downhill. And more than system decay or state refractoriness, individualistic and personalistic factors—failings, really—have played a big part. There are those who study or push issues like the peace process, civil-military relations, and constitutional reform, but none of these can be treated in isolation without factoring in the leadership debility problem.

Recent developments in the region—particularly in India—merit comparison with Myanmar. Naypyidaw and Delhi have much in common now—the falling back upon authoritarian populism, and religious nationalism to begin with. The corollaries in both countries are a disregard for minorities both ethnic and religious, a mistrust of civil society, and the rolling back of democratic and secular values. And then comes the bifurcation of the state of Jammu and Kashmir, the imposition of union territory status, and rule by centrally-appointed governors. All done sadly, in a rather sleight-of-hand manner.

Both Kashmir and Rakhine are the scenes of political failure. For decades, India used to be a democratic ‘model’ for newly-independent countries taking the path of democracy (or returning to it, in the case of Myanmar). In the ongoing contest with China, India was said to have the edge by being a flourishing democracy. I wonder how people would see it now.

But then I would not be doing justice to my country and to friends if I were not to advance breakthrough approaches of my own.

General elections are due next year. Yes, Myanmar is still an electoral democracy, but this is a stage that an electorate lacking in sophistication has to go through on the way to a mature and stable democracy. Most importantly, the present two-party stranglehold has to be broken. The prevailing party system is in its sunset, and calling for new parties in the same mould is more than obtuse. If you can control one-third of the seats in Parliament, the two-party system can be balanced and countered. Authoritarian tendencies can and must be countered. One important lesson to be gleaned from what the Modi government did on Jammu and Kashmir is the ominous risk of a single political party enjoying a big majority in the legislature.

The youth population in Myanmar is tired, exasperated with the political system, and ready for real change. So are many ethnic parties, and youthful aspirations can become cross-cutting. Land is another unifying issue.

The ethnic nationalities should have learned by now the unhappy consequences of voting for the duo of parties. They can make a start by ensuring that chief ministers are no longer centrally-appointed. India’s model of having a governor and chief minister in each state should be widely discussed.

Setting up a monist, ethno-nationalist, non-inclusive and majoritarian political system may allow you to gain enough votes to propel you to power, but it can never be good for a country beyond the short-term. 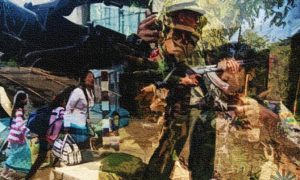 Despite recent attacks by the Northern Alliance, Myanmar's military has extended its unilateral ceasefire. 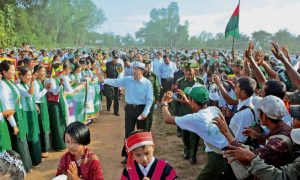