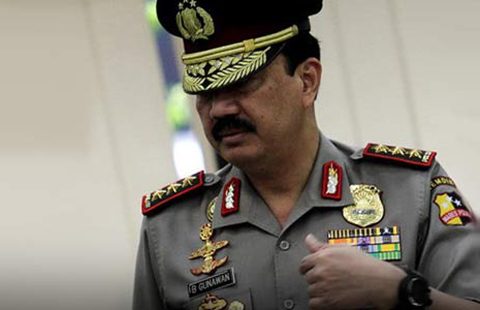 Budi Gunawan has been dropped as Jokowi’s choice for police commissioner.

Despite not having the numbers in Indonesia’s house of representatives, President Joko Widodo has been able to score victories. But as the national police and corruption commission battle shows, that could soon change, writes Jacqueline Hicks.

While all eyes have been on the drama unfolding between the nation’s Corruption Eradication Commission (KPK) and the police (Polri), recent activities at the national legislature (DPR) shed some light on the conflict’s complexities while also signaling the kind of politics we can expect from the next four years.

Considering the dire predictions of blockages at the DPR that accompanied the Jokowi win last year, the new administration has in fact scored several recent victories there. The removal of oil subsidies did not provoke a DPR inquiry, despite noisy threats from some members. While such inquiries do not seriously threaten a government, they have in the past been used alongside street demonstrations to delay and disrupt government business.

On 20 January, direct elections for regional heads was also reinstated with the endorsement of two regulations in lieu of law (Perppu) by all ten of the DPR’s factions. Some important details are still being negotiated about the roles of political parties in nominating regional candidates, but the principle of direct elections seems for the moment to be safe.

Another deal saw the President’s coalition claw back some of the parliamentary authority it had lost from the passing of the MD3 law last November. This law had effectively handed control of legislative business to the opposition coalition by changing the House’s internal rules about how the all-important commission heads and house speaker are chosen. By the beginning of the new legislative session in January, however, some extra deputy commission positions had been added for members of the government’s coalition.

Then on 13 February, the DPR passed the government’s first budget despite last minute efforts from members of both the PDIP and opposition coalition to derail it. Again, the House had passed up a key opportunity to obstruct the new administration.

The KPK/ Polri conflict is clearly a pushback against the KPK for its privileged role in vetting ministerial and police chief candidates, as well as its prior investigations of police and DPR members. But it is also a kind of proxy struggle among the political forces at the DPR, uniting members of the President’s own coalition with the opposition block against him. According to Deputy House Speaker, Fahri Hamzah, the DPR has made things “too easy” for the President so far, and he “should not shame the DPR” by rejecting its preferred candidate for police chief. The implication was clear – in the quid-pro-quo world of politics, Jokowi owed the DPR this nomination.

Now that the DPR’s preferred candidate, Budi Gunawan, has been replaced, future interactions with the DPR may well become more strained, with some members already questioning the legality of the President’s decision. But, in the immediate aftermath of the announcement, the decision to also temporarily replace the KPK chairmen looks like another good compromise, and if the last few weeks have taught us anything, it is that parliamentary coalitions will likely remain fluid and unpredictable in the future.

The larger point is that the new administration has so far proven quite adept at the kind of transactional politics that drives the political process in Indonesia (as elsewhere in the world). It is difficult to know the exact twists and turns of the first few months of this administration, but the very public silaturahmi with Prabowo, coupled with attacks by some members of Jokowi’s own party, show how finely balanced are the political relations. PDIP members have been increasingly disappointed with their share of the spoils of power, from the number of cabinet seats through to this rejection of Budi Gunawan, a PDIP-supported candidate.

However, involvement in transactional politics does not necessarily mean capitulation to vested interests. Elsewhere, further away from the current glare of the media spotlight, there are indications that the new government is taking on vested interests. There is a restructuring of the well-known cash cow, state oil and gas company Pertamina, with Minister of State-owned Enterprises, Rini Soemarno, beginning her term last year by dismissing its entire board of directors. A former KPK chairman now leads the upstream oil and gas body, SKKMigas. The socially progressive policies identified with the Jokowi campaign are also evident, with a draft law on the protection of religious minorities due to reach parliament by April – if it can be passed.

There have been legitimate disappointments with the President’s progress so far, concerns about some cabinet choices, and frustration about the apparent lack of support for the KPK. But if there is to be progress on the full range of policies championed by the government, then the country needs a President who knows how to negotiate – just ask his former partner, Ahok, who as Mayor of Jakarta has yet to have his administration’s budget passed by the local parliament almost two months after the original deadline.

Jacqueline Hicks is a researcher on the Elite Network Shifts project at KITLV (The Royal Netherlands Institute of Southeast Asian and Caribbean Studies).