Netiwit and Boon at Boon where Boon often sleeps

The forced disappearances and assassinations of Thai republicans exiled in neighbouring countries has attracted considerable attention in recent months. But political exile can be a two-way street. The activities of Lao dissidents who have fled to Thailand can offer some insight into anti-regime sentiment in Laos, though the inflow of foreign dissidents to Thailand is rarely the subject of much interest. We hope writing this article will paint some of the effects that the installation of a military government in Thailand has had on not only local dissidents, but dissidents opposed to undemocratic regimes in foreign countries.

A simple Google search can yield several lectures critiquing the Lao government uploaded onto Youtube by Lao dissidents operating in Thailand, with videos sometimes attracting more than 500,000 views. The speakers in such videos usually wear black outfits obscuring their faces and black sunglasses, with some clips showing only the midsection of the speaker’s body—measures taken to avoid being identified by Lao authorities.

Awkwardly filmed as these videos are, they have attracted a significant following from Thai viewers, Lao viewers and Lao viewers residing in Thailand alike. The popularity of these low-budget dissident videos is one locus of popular discontent towards the Lao People’s Revolutionary Party’s one-party state, whether such dissatisfaction revolves around ongoing infrastructure construction, particularly dams, that pays little interest to negative effects on the lives of villagers, land ownership regulations, or violations of human rights and civil liberties.

Boon (pseudonym), aged over 30, residing in Thailand, is one such Lao activist who has taken to Youtube to directly and explicitly criticise the Lao government. But his videos immediately present differences set apart from the videos of others. Most obviously, Boon lambasts the Lao government with the camera pointed brazenly at his face. Nor does he wear any facial coverings.

“Others worry that revealing their faces will lead to problems once they return to Laos. But I believe that the struggle for justice requires some people to openly and seriously fight,” Boon says.

Though many dissident videos appear as a release of emotion, where the speaker lengthily and windingly lambasts the Lao government, Boon’s videos stand out for the depth with which he dissects political issues: human trafficking, foreign investment and infringements on state sovereignty by the Chinese government, dam-building, and land ownership. Public participation in Boon’s videos numbers hundreds of thousands of viewers from both sides of the Mekong.

We first came into contact with Boon when he contacted Netiwit (one of the authors) through Facebook, saying that he followed Thai politics and was impressed with Netiwit’s political thinking and campaigning. Fittingly, Boon had first heard of Netiwit from an interview uploaded onto Youtube where Netiwit levelled critiques at the Thai government. Boon explained that he was an activist leader and the founder of a Thai-based organisation that mobilises for human rights in Laos.

A few days later, we travelled to meet Boon in a public park in the Thonburi area. Boon began by showing us his UNCHR card which legitimises his refugee status, explaining that his organisation is membered by some 40 other individuals who are at risk of prosecution for their resistance. Though all those these members applied for refugee status from UNHCR, Boon alone passed the interviewing process to gain recognition. We asked Boon about the problems he faces a Lao refugee in Thailand, and what life was like before those problems arose.

Boon first arrived in Thailand in 2002 as any other migrant worker who travels to Thailand to improve one’s economic prospects. At first, he took care of rooms in Silom rented out by a Singaporean businessman. During that period, Boon made enough money to not only get by but also save a little. He was relatively well-known among the local Lao community and, in between working, began to amass a group of individuals with like ideology. In 2015, he began to channel the money he had collected into forming a Thailand-based activist group mobilising for human rights for the Lao people.

In the past, Thailand was a regular place of exile for many political dissidents (then junta-leader Prayuth Chan-oncha himself once promised the United National General Assembly to respect the rights of refugees). Yet Thailand is not a signatory to the 1951 Convention Relating to the Status of Refugees and the 1967 Protocol. There have been several cases of Thailand returning refugees to the countries from which they fled, such as that of Cambodian dissident Sam Sokha who was transferred to the Hun Sen government despite UNHCR having recognised her status as a refugee. The consequences of the refoulement was the sentencing of Sokha to two years in prison. Another case involved Jiang Yefei, an artist known for cartoons satirising Chinese politics and Dong Guangping, a Chinese human rights activist. Both fled to Thailand and were awaiting recognition of their refugee status from Canada, but both were detained by Thai authorities and sent back to China. Jiang was sentenced to 6.5 years in jail while Dong was sentenced to 3.5 years in prison for “illegally crossing a national border” and “inciting subversion of state power”.

Then in 2017, the Royal Decree on Managing the Work of Foreigners abruptly spiked fines for employers who employ foreign workers without a work permit to between 400,000–800,000 baht (though the fine rates for illegally employing foreign workers were reduced the following year). Due to his videos criticising the Lao government, Boon believes he would not be able to apply for an extension of his work permit even if he returned to Laos. He believes he would be arrested, as was the case with three close friends with similar ideology. Boon handed over photos of three individuals with their heads shaved and bowed on TV as state officials announced their arrests. One was sentenced to 20 years in jail, another to 16 years in jail and another to 12 years in jail.

New labour laws clamping down on foreign workers have had the effect of quieting campaigning in Thailand against the Lao People’s Revolutionary Party. Boon’s inability to return to Laos after having openly resisted the regime means he is now trapped in a state of unemployment and economic precarity. After being evicted from his rented room, Boon alternates between sleeping under expressways, in public parks and on a hammock in a forest in Thonburi. He is reliant on temple charity for access to food and water. 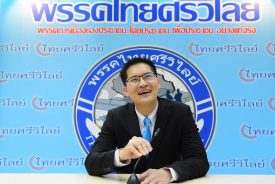 Before we had a chance to further inquire into the case of his three friends, Boon took up another photo of himself at the head of a meeting, surrounded by those friends who had been sentenced to jail. Besides his videos and his leadership of an activist organisation, Boon described other reasons he would be unable to return to Laos safely. One is that he regularly leads campaigns outside the Lao embassy in Thailand, including to demand justice in the case of the enforced disappearance of the dissident Sombath Somphone in 2015, in which the Lao government denies culpability despite video footage of Sombath being forcibly dragged into a van in Vientiane.

In short, receiving recognition as a refugee from UNCHR has not allowed Boon to live a life of dignity, much less a life where he feels safe. He said that UNHCR has advised he maintain as low a profile as possible and try to find his way to a third country, preferably one without shared borders with Thailand or Laos. Nor is the situation better for Thai activists who have fled to Laos—Boon brought up the now well-known cases of Thai republications murdered in Laos, noting that Laos is not a signatory of the 1951 Refugee Convention either.

A week later, once Boon trusted us more, he brought more photos and played some clips from the meeting where his organisation was established. He explained that the clip features 30–40 activists who, like him, were willing to show their faces. More than 100 other Lao migrant workers in Thailand attended the meeting that day, but declined to be photographed. At least three of the activists who openly campaigned with Boon have now been arrested by Thai authorities. Boon has lost contact with the rest. Though perhaps it is most accurate to say that the rest have lost contact with him. Boon has stopped filming Youtube videos critiquing the Lao government. When members of his organisation ask about his silence, he tells them he is ill, even though this is not true. He does not want to risk the safety of those who believe in him and who once mobilised politically with him.

“I have spent a long time fighting for others. Now I’m asking to have some semblance of a safe life myself,” he said tiredly.

In the knowledge of Boon’s precarity and Thailand’s history of returning refugees to the countries from which they fled, Netiwit wrote a letter requesting to speak with the Canadian Ambassador to Thailand, though he did not receive a reply. But on 20 April 2019, Ambassador Donica Pottie gave a talk on the rights of refugees at Chulalongkorn’s Faculty of Political Science, where Netiwit is currently studying. Netiwit invited Boon to attend the speech, in the hopes that Boon might have the chance to speak to the Ambassador. On the day of the speech, Netiwit handed the Ambassador a note requesting an audience as she left her car. Boon was able to clasp her hand. His face was one of delight, as if his chances of being safely repatriated in a third country had already increased. After the Ambassador left, Boon turned to us and said, “My brothers, my organization believes in me. I have to live as long as possible.”