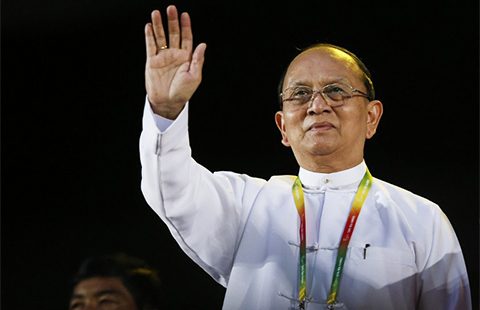 Leaders and the vote

This Sunday, President Thein Sein and the military have a historic opportunity to help ensure change in Myanmar.

Sworn in to office in March 2011, President Thein Sein and his government have taken some remarkable steps towards change in Myanmar.

These include opening up to the international community, an effort to normalise diplomatic ties with the West, and inviting foreign investors following decades of isolation from the global economy.

While this effort has produced some tangible success, the apparent initial openness has been followed by restrictions in several forms–leaving Myanmar languishing as one of the worst countries in the world for business according to several international rankings.

Concerns that the country’s new market opportunities will only benefit a small privileged elite and a few cronies have been backed up by recent revelations by Global Witness about the $31 billion jade trade.

Domestically, results of some of the political reforms are immediately obvious: political prisoners have been released; media restrictions relaxed; civil society organisations, unions, and political parties allowed to form.

However, in recent times a number of journalists have been arrested; student protests demanding education reform were crushed with many imprisoned; and military offensives against ethnic minorities were launched.

In fact, despite a ‘nationwide’ ceasefire, armed clashes continue in several minority areas, traumatising and displacing thousands of civilians.

While seeing some noteworthy achievements in its initial stages, the peace process has since only seen eight of more than 20 ethnic armed groups sign the so-called Nationwide Ceasefire Agreement (NCA) on 15 October, failing to deliver the desired outcome: nationwide agreement.

At the legislative level, while it is possible to add insignificant provisions and make peripheral changes to the law, any proposed amendments that would change the country fundamentally have been effectively vetoed by the armed forces voting bloc in Myanmar’s parliament.

The controversial Constitution of 2008, drafted by the military, remains unchanged, meaning the military still automatically enjoys a quarter of total seats in parliament. In addition, any substantial change to the constitution requires more than 75 per cent of both houses of parliament voting in favour of an amendment. In many ways then, Myanmar is stuck in 2008.

So in light of Sunday’s historic vote the question now is, if Myanmar still wants to move forward and deepen democracy, how can this happen?

Essentially, three things have to occur if real democratic ideals are to materialise for the people of Myanmar.

The first is ensuring this Sunday’s elections are conducted as freely and credibly as possible, and that the will of the people, as expressed through the elections, is fully respected by a smooth implementation of the results by authorities.

This means ensuring there is no violence, coercion, or intimidation in the lead up to and during this Sunday’s poll, as well as implementing the result.

The second is implementation of the NCA, which is imperative.

The military has a crucial role to play in this –opening up the process, working with the post-election government in recreating a space for all, including the signatories, the non-signatories of the 15 October pact as well as other stakeholders.

In fact, the military must work with all stakeholders to morph the complex realities and demands of ethnic groups into a simple federalist democracy. This is also possible within a reasonable timeframe.

The third is allowing constitutional reform.

The 2008 Constitution has to be amended; simply put, the document is undemocratic. Myanmar must be rebuilt as one of the Southeast Asia’s powers through an economic capacity based on a strong democratic foundation. This can only happen if necessary constitutional reform takes place.

Regardless of the result this Sunday, something that all Myanmar people should welcome is the fact that Nobel laureate and main opposition leader Daw Aung San Suu Kyi has continued to reiterate throughout her campaign that she would prioritise national reconciliation, ethnic harmony, and the elimination of antagonism without any grudges.

The post-election period offers a historic opportunity and the onus is in the hands of President Thein Sein and the commander-in-chief of Myanmar’s Armed Forces, Senior-General Min Aung Hlaing, to ensure that Myanmar moves forward.

By doing so, they could leave a truly distinctive and powerful legacy for the country and its people.

Salai Elaisa Vahnie is a long-time advocate for change in his native Myanmar and an observer of the country’s ongoing reforms. He holds an MPA degree in Policy Analysis and Comparative International Affairs.