I talked to Lee Morgenbesser from the Griffith Asia Institute on the sidelines of the “Cambodia on the Brink” conference hosted by the ANU on 9 March, and the good people at the ANU’s College of Asia and the Pacific were there to film it. I’ll admit I’m not a TV natural, but Lee had some very interesting things to say from the perspective of a comparative political scientist about how unusual—indeed risky—it is for Hun Sen to make the shift from  electoral authoritarianism to “hegemonic” authoritarianism.

For readers keen to read some of Lee’s work, I can recommend his book, Behind the Façade: Elections Under Authoritarianism in Southeast Asia, and this article exploring the personal nature of Hun Sen’s rule and the issues that raises for the categorisation of authoritarian regimes in comparative politics. He’s also contributed to New Mandala together with Tom Pepinsky on the topic of “Elections without democracy in Southeast Asia”.

You can also listen to a podcast of a panel held at the same conference, where Gareth Evans, Elaine Pearson and Leng Thearith spoke to Aaron Connelly about what the world can, can’t, should, and shouldn’t do in support of democracy and human rights in Cambodia.

For background on the deteriorating political situation in Cambodia, check out the recent posts on Cambodia by New Mandala contributors. 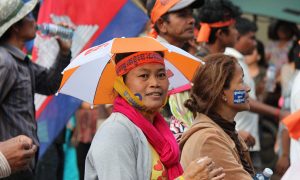 The dissolution of the CNRP protects the prime minister’s position in the short term, but may backfire in the long run.