It might be easy to forget given the events of recent weeks, but Cambodian democracy had until a few years ago been making progress. Many key indicators of democratic quality had continued their improvement since the 1998 national elections, which followed the near collapse of the system in the aftermath of the July 1997 internal fighting between armed forces loyal to Prime Minister Hun Sen and Prince Norodom Rannariddh.

Competition among political parties increased, thanks to the unification of the opposition parties in 2012 ahead of the 2013 national election. The economy has grown extraordinarily well over the past decades, averaging 7% per year since 1993 and helping poverty to fall more than one percentage point per year on average since 2003. Inequality has also declined. Vertical political accountability has been strengthened markedly, thanks to the decentralisation and de-concentration reform program the government has implemented over the past two decades. Cambodians are increasingly able to hold local leaders to account for their actions through local democratic processes.

The 2013 polls were a turning point. The ruling CPP (Cambodian People’s Party) lost the popular vote for the first time since 1998. (It did not win the popular vote during the UNTAC period.) The CPP saw its popular vote plummet by more than 20 percentage points in that election. To its credit, the CPP-led government subsequently implemented various reforms aimed at winning the hearts and the minds of Cambodian voters, including public servants. The CPP has permitted moderate reforms, particularly in the ministries of Education, Youth and Sports, Commerce, Environment, Economy and Finance, and Foreign Affairs and International Cooperation. The National Electoral Committee has also been restructured and made somewhat more independent. The government has increased public servants’ official pay dramatically since 2013. In August 2017, Hun Sen also promised a slew of new benefits for garment workers, including a big increase in their monthly minimum wage—from US$153 to at least $168, plus pensions.

But with the carrots have come sticks.

Indicators of horizontal accountability have either stalled or are in decline. Local and international NGOs and media had been able to operate with comparatively little constraint and control from the state before the pre-2013 national election period. Since then, the government has made disturbing moves that wipe out progress made in terms of political openness prior to 2013. Among a range of actions is the passage of legislation governing NGOs. Despite a boycott by the opposition, the parliament passed a Law on Associations and Non-Governmental Organisations (LANGO), which requires the nearly 5,000 domestic and international NGOs that work in the country to register with the government and report their activities and finances or risk fines, criminal prosecution, and being shut down.

Last month, the government used this law to order the National Democratic Institute (NDI) to shut down its operations and repatriate its foreign staff within one week, prompting the US embassy in Phnom Penh to question the Cambodian government’s commitment to democracy. The government accused the NDI of illegally operating in the country. (The embassy claimed that the NDI has worked to promote democracy in Cambodia since the early 1990s.)

The Cambodian government has also targeted foreign and foreign-linked media. In August this year, the government accused The Cambodia Daily of failing to pay more than US$6 million in taxes, giving the paper one month to resolve the issue or risk being shut down. The Daily is an American-owned outlet credited for its reports critical of the government. In addition, the government instructed more than a dozen radio stations across the country to cease operations, accusing them of failing to report how much and to whom they sell their airtime. Some of these radio stations were reportedly selling their airtime to Radio Free Asia (RFA) and the Voice of America (VOA). The Cambodia Daily, RFA, and VOA are critical of the Cambodian government and are thus seen as promoting the interests of the opposition parties.

The question is: why is this happening now?

The external factor is America’s declining role as a champion of democracy. The drastic moves targeting American-based NGOs and media occurred in the aftermath of the election of Donald Trump, who was himself elected on a platform of populist policies. His election, and his subsequent attacks on the American mainstream media, have disconcerted democrats at home and abroad and certainly delegitimised American efforts to promote liberal democratic principles internationally. The flaws of American democracy in the era of Trump (not to mention the administrations before him) have helped make democracy even less appealing among Cambodian ruling elites.

Furthermore, the failure of America to pre-empt and manage democratic breakdowns in Thailand and to promote democracy in Laos and Vietnam, Cambodian’s immediate neighbours, only serves to diminish America’s role in promoting democracy in Cambodia, and potentially gives the Cambodian government an excuse to maintain the status quo.

Likewise, Australia and European countries have been silent on these issues so far, showing a similar unwillingness to influence internal political decisions in Cambodia. The 2014 Australia–Cambodia refugee deal tainted Australia’s reputation as an altruistic donor to Cambodia, and has certainly undermined Australian leverage in promoting reforms in Cambodian domestic affairs. European countries have been busy cleaning up the mess in their own backyard after the Brexit vote in 2016 and the rise of populist movements across the continent.

Meanwhile, Cambodia is increasingly dependent on China, and less and less so on Western countries. China is feeding the Cambodian economy, investing US$857 million (roughly 61% of total FDI) and channelling US$320 million in aid (roughly 30% of total aid) to the country in 2015. By contrast, investment and aid from Western countries is either modest or on the decline.

Whatever the mix of domestic and global political influences, though, the consequences of the CPP’s crackdown on Cambodia’s democracy are being felt. Critics of the government are thinking twice before they speak.

In light of Cambodia’s disastrous recent past, as long as the Cambodian government manages to maintain satisfactory economic performance, continues its piecemeal reforms benefiting the majority of the population, and promotes some appearance of democracy in the country, it will continue to demand difficult value judgments and decisions on the part of Cambodian citizens as to whether the CPP’s actions against the media and civil society are worth fighting back against.

Kongkea Chhoeun is a PhD Candidate at the Australian National University’s Crawford School of Public Policy, researching the effects of Australian and Chinese scholarships on Cambodian scholars’ political attitudes. He has worked for international development organisations in Cambodia and earned an MPA from the University of Hawai’i at Manoa. 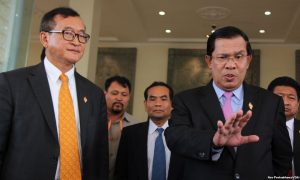