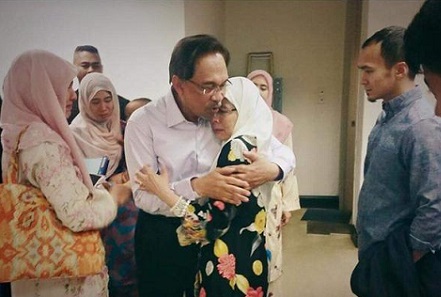 Anwar consoles members of his family after Tuesday’s court ruling. Photo from Twitter.

With Malaysian opposition leader Anwar Ibrahim losing his appeal against sodomy charges and receiving a harsh five-year jail sentence, it could spell the end to his political career.

New Mandala spoke to Malaysia expert Dr John Funston, from the ANU College of Asia and the Pacific, about the trial and conviction, and what it means for Anwar, the opposition and the country’s political future.

New Mandala: Now that he has been convicted, does this spell the end of Anwar Ibrahim’s political career? Why or why not?

John Funston: This conviction is likely to end 67-year old Anwar Ibrahim’s direct political role. It will now mean five years jail (40 months with remission for good behaviour), then five years after his release before he can contest political office.

But he will still be able to influence developments from prison, as he did during his previous six-year incarceration. He will also be a potent political symbol of government oppression.

Of course if the opposition were to win the next election – due by 2018, but can be called earlier – there may be ways to facilitate an earlier political return.

New Mandala: Can the opposition recover from a conviction for Anwar?

John Funston: Some predictions are that his incarceration may in fact make opposition success in the next election more likely. But that is premised on the coalition holding together.

There is no one around with the status to bring them together, particularly as some leaders in the Pan-Malaysian Islamic Party (PAS) – notably party president Ustaz Hadi – are currently going off on one of their flirtations with extreme Islam, and even considering another alliance with the ruling UMNO party (it was part of Barisan Nasional from 1974-1978).

New Mandala: What does the future hold for Malaysia’s opposition and who do you think will likely succeed Anwar as leader if convicted? What are the merits and pitfalls of this?

John Funston: Without Anwar being around uniting the conflicting policies and personalities, maintaining the opposition alliance will be extremely difficult.

Anwar’s wife Wan Azizah has acted in a similar role in the past, and is the most likely replacement. However PAS – particularly Hadi – recently opposed Wan Azizah becoming the Menteri Besar (head of government) of Selangor, so there is no certainty the party will accept this.

It is almost certain the candidate will have to be from PKR. The Democratic Action Party (DAP) is seen as too Chinese and PAS too Islamic/Malay. The current Selangor MB, Azmin Ali, is another possibility, though he already has a large task as the new head of Malaysia’s richest state.

New Mandala: Many have criticised the trial as being trumped up and an attempt to remove the government’s most potent opposition voice. What do you consider to be the motivation behind the trial?

John Funston: Since 1998 Anwar has been seen as the major threat to the ruling UMNO party. On that score they are correct – election results in 2008 and 2013, saw the BN loose its two thirds majority (enabling it to amend the constitution at will) and then, in 2013, be out-polled in the popular vote by 50.9 per cent to 47.4 per cent.

All neutral observers agree that politics was the key consideration. Former defacto law minister Zaid Ibrahim has noted that since independence (1957) no one else has been charged for consensual homosexual activities.

John Malott, US Ambassador to Malaysia in 1998, has written of events at this time, quoting Najib’s close adviser Razak Baginda (now in exile following his involvement in the Altantuya case, which saw the murder of a Mongolian national) as telling an embassy official, “The decision has been made.

“They are going to ‘nuke’ Anwar politically for all time to come. Until he can never stand up again politically.”

Shortly after a senior member of Special Branch told an Embassy officer, “We are going to keep filing charge after charge after Anwar so he will be in jail for the next 100 years.”

New Mandala: How would you describe the general state of politics in Malaysia? Is democracy even less likely?

John Funston: In September 2011 PM Najib announced a number of reforms that appeared to be moving in a more democratic direction, including ending a decades’ long state of emergency, amending several repressive laws, and repealing the notorious Internal Security Act and promising to do the same with the catch-all 1948 Sedition Act.

But replacement acts often had similar defects, and detention without trial for a period of two years was introduced in an October 2013 amendment to the Prevention of Crime Act, for individuals merely accused of “serious crimes.”

At the UMNO general assembly in November 2014, following an orchestrated ground-swell of claims that the Malay race was under a dire threat, Najib announced that he would not repeal the Sedition Act but actually strengthen it. In 2014 over 20 sedition cases were prosecuted or investigated, directed against members of the opposition, NGOs, journalists, lawyers and even legal academics.

In the wake of poor electoral results in 2008 and 2013 UMNO has fallen back on strengthening its rural Malay base. It is encouraging extreme demands by organisations such as Perkasa, Isma and Perkida, in an attempt to frighten Malays into fearing a non-Malay takeover.

In a development that bodes ill for democracy in Malaysia, it has focused on upholding the alleged ‘social contract’ in the constitution guaranteeing Malay ‘special privileges’, an Islamic state, and the absolute sovereignty of the Sultans – a quite inaccurate interpretation of the compromises included in the 1957 constitution.

New Mandala: Do you think his government is on the ropes?

John Funston: It is probably an exaggeration to say the government is ‘on the ropes’.

The opposition has been deeply divided over recent months, mainly for reasons noted in regard to PAS above. PKR has also had serious internal divisions.

UMNO too is deeply divided, with former Prime Minister Dr Mahathir leading a formidable challenge to Najib, but no potential successor has yet emerged.

In addition, UMNO’s control of the state – including its finances, media, security arms, judiciary, Attorney-General, Election Commission etc – gives it enormous resources that can never be under estimated.