Contributions are rolling back in so we’re closing this liveblog of developments in Thai politics. We’ll kick it back up in the event of abnormal volatility. For now, look forward to our usual in-depth analysis from leading experts.

Ubolratana’s prime ministerial candidacy appears to be over, with Thailand’s Electoral Commission (EC) omitting her name from the list of confirmed PM candidates after its meeting today.

#BREAKING: @ECT_Thailand announces 45 PM candidates for the next #ThaiElection19, excluding @TsnParty’s candidate Princess Ubolratana, because as a Royal Family member, she cannot run for office.

The political drama in Thailand will now enter a new phase, with the EC reportedly convening again tomorrow to discuss the dissolution of the Thai Raksa Chart, the Thaksinist party which had nominated the former princess.

While events are moving fast enough to make analysis redundant almost as soon as it’s written, New Mandala will continue to bring readers expert commentary and interviews during this immensely consequential moment in Thai politics. Stay tuned to this live blog and our dedicated Thailand twitter feed at @ThaiNewMandala.

With all eyes on the Election Commission and Thai Raksa Chart, the pro-military Phalang Pracharat campaigns at the historically-significant Ratchadamnoen Avenue while Future Forward Party leader Thanathorn Juangroongruangkit goes jogging with voters. Rungruang Pittayasiri, a member of Thai Raksa Chart’s managing committee, has submitted a request to the Election Commission requesting to resign as both a member of the party and from his position of leadership in the party. He insists that he was not involved in the registration of Ubolratana as a prime ministerial candidate, and had made his intentions to resign clear to the Party on 4 February. A video of his statement can be watched here.

Khaosod English reports: “Police were looking Moday morning for whoever was behind a forged Royal Gazette announcement that Army Chief Gen. Apirat Kongsompong and other armed forces leaders had been removed by the junta leader.

Apirat, who is also junta secretary, ordered its legal team to file a police complaint and bring the perpetrator to justice.

He also ordered that a “war room” be set up to monitor the situation and prevent people from panicking after rumors of a coup that spread Sunday night following the short-lived prime ministerial candidacy of former princess Ubolratana Mahidol, daughter of the late King Bhumibol.”

Prawit Wongsuwan has given his first public interview in over a month, albeit a very short one. When asked whether there is a secret coup to overthrow junta leader Prayuth Chan-ocha, Prawit insists, “There isn’t, there isn’t”. This morning, #รัฐประหาร (#coup) is a top five trending topic on Twitter in Thailand. Coup or not, it’s lining up to be a hectic day at the Election Commission.

At 10am, the Commission is convening to deliberate on the validity of Thai Raksa Chart’s nomination of Ubolratana as prime ministerial candidate.

At 10am, Srisuwan Janya, secretary-general of the “Association for the Protection of the Constitution”, will also submit a petition calling for the dissolution of Thai Raksa Chart completely.

Then at 1.30pm, Ruangkrai Leekitwattana of Thai Raksa Chart will submit a petition calling on the Election Commission to rule junta leader Prayuth Chan-ocha’s prime minsterial nomination as invalid.

Yesterday on 10 February 2019, reports emerged of a written order issued via the Royal Thai Police’s radio network. The document, classified as “of upmost importance” and at the level of “secret”, was sent from the Phichit Provincial Police Commander to the Deputy Phichit Provincial Police Commander (who is in charge of security). It was then sent all the way down to district superintendents, district chief inspectors down to the inspector of general staff division 4 and the inspector of general staff division 6. The order was issued on 9 February 2019 and read:

Due to an urgent official matter, the related units are to immediately operate as follows:

When questioned, Pol Maj Gen Thawatchai Muannara, the Phichit Provincial Police Commander, revealed that he had received orders from security forces in the 36th Military Circle to oversee government areas, whether town halls or other state institutions, due to the possibility of chaos, out-of-the-ordinary incidents, or incidents/people with ill intentions come to agitate. On 9 February, Thawatchai subsequently gave the order to ready one company of crowd control forces within the hour. In any case, as of today, nothing has occurred out of the ordinary.

It is unclear whether similar orders where issued in other provinces.

Note: The translation above was completed at approximately 02.05AEST. Sometime afterwards, Matichon made an addition to their article so that the final paragraph reads (addition not in italics):

When questioned, Pol Maj Gen Thawatchai Muannara, the Phichit Provincial Police Commander, revealed that he had received orders from security forces in the 36th Military Circle to oversee government areas, whether town halls or other state institutions. The assembly of forces was a normal procedure during the election period, due to the possibility of chaos, out-of-the-ordinary incidents, or incidents/people with ill intentions come to agitate. On 9 February, Thawatchai subsequently gave the order to ready one company of crowd control forces within the hour. In any case, as of today, nothing has occurred out of the ordinary. A copy of the order printed by matichon.co.th

Early this morning, sightings of tanks rolling out in Lopburi stirred rumours the military is preparing for a coup. Later, images circulated online of tanks, only this time taped with pieces of paper with the words “FOR TRAINING”—this probably contributed to the opposite of the intended affect.

According to Major General Piyapong Klinpan, the commander of the 2nd Infantry Division, Queen’s Guard, the tanks and ammunitions photographed were involved in annual military training. Piyapong claimed that the exercises involve transporting vehicles and weaponry from the provinces of Sa Kaeo, Prachinburi and Chonburi to Lopburi. Apparently the exercises have been going on since 1 February 2019 and will conclude on 21 February 2019.

It should be noted that multinational Cobra Gold military exercises are schedued to be held in Thailand during 12-23 February.

Piyapong condemned photos shared online for neglecting to show the pieces of paper with the words FOR TRAINING, accusing those who took them as intent on creating misunderstanding. It seems unclear whether the tanks were originally taped with the papers or were only taped after soldiers became aware of the online commotion. Image source: Public image on the Facebook page of Wassana Nanuam, a journalist from the Bangkok Post.

Worries about the whereabouts and safety of Thai Raksa Chart leader Preechapol Pongpanich have been put to rest, after he was photographed giving merit at Wat Na Phra Meru, Phra Nakhon Si Ayutthaya province. At roughly the same time Thai Raksa Chart released its promise to “walk forward in the electoral arena”, the party’s provincial candidates have reported being hamstrung in campaigning. In an interview with the newspaper Thai Rath, MP candidates from Udon Thani reported that—unlike candidates from other parties—they have neither taken to the streets to interact with voters or put in place campaign posters, because they continue to await orders from the party’s Bangkok headquarters.

In the party’s first public statement after “accepting the royal command with loyalty toward His Majesty”, Thai Raksa Chart has released the following Facebook statement:  “The Thai Raksa Chart Party would like to say thank you for the outpour of encouragement that has come in over the past 1–2 days. We stand with the people. We stand by our original principles and will continue to walk forward in the electoral arena in order to solve problems for the country and the people”. Srisuwan Janya, secretary-general of the “Association for the Protection of the Constitution”, has publicised via Facebook his intention to petition for the dissolution of Thai Raksa Chart. At 10am tomorrow, Srisuwan will submit a petition to the Election Commission to (1) rule that Thai Raksa Chart violated both the Organic Law on Political Parties and the Organic Law on Elections in nominating Ubolratana as a prime ministerial candidate (2) recommend the dissolution of Thai Raksa Chart to the Constitutional Court. Against the silence of Thai Raksa Chart, Future Forward Party presses on with campaigning. Last evening, the hashtag #ฟ้ารักพ่อ—a hashtag devoted to the “hot daddy” qualities of the party’s leader Thanathorn Juangroongruangkit—became the number one trending Twitter topic worldwide. The past 48 hours has ignited considerable online discussion over the relationship between the monarchy, the law and politics. Art Suriyawongkul (@bact), from the Thai Netizen Network, notes: “If people believe that royal commands are law, or if in the end they have some real effect in the way of implementation, then it’s clear: the monarchy has political power. Anyone who says that the monarchy is unrelated to politics should eat some leafy greens then rest their eyes [link to Wikipedia article on Vitamin A]”.

Permission to publish photo of tweet given by @bact. An optimistic message from Thaksin Shinawatra:

Representatives of Thak Raksa Chart have publically refuted rumours that the party’s leaders have fled the country or been arrested. Still, concerns over the whereabouts of Preechapol Pongpanich, the leader of Thai Raksa Chart, continue to abound online. One tweet, originally in Thai, by @drballban at 20.48PM (Bangkok time) has been retweeted over 5000 times: “This is quite serious. Until now, no-one knows the whereabouts of Khun Preechapol, the leader of #thakraksachart and the person who submitted Her Highness Ubolratana’s name as a prime ministerial candidate. He has only told his mother not to worry and that he is well. Everybody, let’s give encouragement to Khun Preechapol”.

The NGO iLaw hones in on Article 13 of the Organic Law on Elections, related to the withdrawal of PM candidates. According to the article, parties or candidates can only withdraw their names from candidature if they die or are ineligible. This withdrawal must occur before the deadline for submitting candidates, which lapsed on 8 February. iLaw’s more detailed breakdown in Thai available here. At the 73rd football match between Thammasat and Chulalongkorn universities, the Thammasat Cheer Club puts on a performance referencing the prime ministerial candidate dramas… ending with “TO BE CONTINUED”. The video, going viral, can be watched here.

Despite the shocks of the past 24 hours, youth from Thammasat and Chulalongkorn University push forward with election-related gestures at their 73rd traditional football match. In a parade of floats, one features a ballot box stamped with “Constituency 44” (in reference to Article 44 which grants absolute power to the junta head). The faces of PM candidates Chadchart Sittipunt from Pheu Thai and Thanathorn Juangroongruangkit from Future Forward Party lie in a heap.

Other floats related to #savehakeem and Chinese investment. 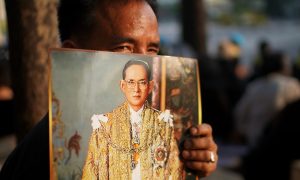