The government’s determination to focus on the Malay community is shrewd politics, but it also plays into a major transformation taking place in Malaysia, the consolidation of a specifically Malay Malaysia.

What exactly this Malaysia will look like is not certain, but there is a demand for a stronger Islamic role. The Malayisation process has been underway for decades, and is partly a matter of demographic change. At the time of independence (1957), Malays were only about half of the country’s population; today they are a clear majority in Peninsular Malaysia, and together with other indigenous peoples (the bumiputra, “sons of the soil”) make up over 68 per cent of the Malaysian total. Building a Malay Malaysia will entail reconsideration of the nation’s founding document.

At a glance, the constitution of 1957 displays the strong influence of the English-speaking world, with its Westminster parliamentary system and Australian/United States federal structure, and has been said to imply a “liberal-democratic order”. But the constitution also includes local formulations that over time have influenced Malaysia’s identity as a nation, and they all bear on the process of building a more Malay nation.

First, the “sovereignty, prerogatives, powers and jurisdiction” of the nine monarchs of Malaysia are stressed, and in a manner conveying (in the words of one prominent legal scholar) that the role of the monarch “far exceeds” specific “constitutional provisions” [fn1]. Second, “the Malays” are declared to have a “special position” in the country, and are assured a particular share of appointments in public service and educational opportunities. Moreover, the constitution names Malay as the “national language”. Third, although the constitution is sometimes seen as inaugurating a secular polity, and declares itself to be “the supreme law of the Federation”, it contains the potent but confusing statement that Islam is “the religion of the Federation”. Multiple monarchy, Malay pre-eminence, and Islamic priority: these features together help make Malaysia internationally distinctive. The meaning and significance of each element, however, continue to be debated.

Following race riots between non-Malay (Chinese and Indian) and Malay Malaysians in 1969, the Malay character of the country was sharpened, with a greater stress on the Malay language and culture, as well as promoting Malay economic opportunities. In the 1980s the concept of “ketuanan Melayu”, often translated as “Malay dominance”, was enunciated. Besides UMNO, other organisations such as Perkasa (formed in 2008) and more recently the Red Shirts have played an activist role in promoting Malay rights. With respect to religious identity, Pas has long urged a greater role for Islamic doctrine in the legal system and Malay society generally. Particularly during the Mahathir administration (1981–2003), the government itself instituted policies to enhance the role of Islam, for instance through the creation of an Islamic bank and an Islamic university, and the strengthening of the role of Islamic courts.

Alongside the Najib administration’s emphasis on moderation internationally, something welcomed especially in Western countries, the domestic focus on gaining Malay support has encouraged less-moderate initiatives. In August a minister in the Prime Minister’s Department said atheists should be “hunted down” and returned “to their faith”. The government also appeared to assist the attempt by Pas to strengthen the Islamic criminal code (hudud) by empowering shariah courts to impose heavier punishments. A further move was the change in leadership of PM Najib’s Global Movement of Moderates, established to further the government’s moderation objectives. The new CEO (appointed in 2015), Nasharudin Mat Isa, formerly a PAS deputy president, soon focused on how best to implement and explain hudud law in the country. “Malaysia being a Muslim state,” he said, “we can be a model of how that kind of law is implemented in a modern society.” Consistent with this appointment, the prime minister explained that moderation would now be pursued on the basis of shariah principles and insisted that “humanism and secularism as well as liberalism” were a “threat to Islam”.

The July 2017 banning of the book Breaking the Silence: Voices of Moderation, produced by a group of prominent moderate Muslims called the G25, also illustrated the changing religious climate. In Malaysia’s “constitutional democracy,” the book insists, the federal constitution is the “supreme law of the country,” and “any law enacted, including Islamic laws,” must not “violate the Constitution,” with its stress on such “fundamental liberties” as the “rights to freedom of expression and worship”. Among those opposing the ban, the Human Rights Commission of Malaysia (Suhakam) argued that the book’s contents were in line with PM Najib’s advocacy of moderation (wasatiyyah) in Islam.

There have been protests from the non-Malay partners in the ruling coalition about the government’s support for religious conservatism. “Malaysia is a secular country,” an officer of the Malaysian Chinese Association declared in March 2017, insisting that the federal constitution requires “defending all religions.” Faced with such views, in March the government backed away from actually sponsoring the hudud bill introduced by Pas. Despite such reversals, however, the momentum toward Islamisation is strong. In 2017, for instance, public whipping was introduced in Kelantan state; and Pahang state adopted the Islamic concept of diyat, which allows a victim’s family to influence sentencing involving the death penalty. Considering these initiatives, it is important to take note of polling that suggests strong support in the Malay community for religious conservatism. Furthermore, in the view of some Islamic activists, current religious initiatives merely follow a long history of burgeoning Islamisation, reaching back before British intervention in the 19th century.

The Constitution’s reference to Islam as “the religion of the Federation” is also increasingly highlighted—placed above the claim that the Constitution itself is “the supreme law”—and seen as a basis for arguing (as a former chief justice did this year) that “anything which is in contradiction to Islam is unconstitutional”. One matter clear in the Constitution is that the nine rulers are “the Head of the religion of Islam” in their respective states. The Conference of Rulers—which in late 2015, in the context of the 1MDB investigation, had questioned the “government’s credibility and integrity in administrating the country”—took an assertive stand on religious matters in October 2017. The Johor sultan had condemned a launderette for adopting a Muslim-only policy. Johor, he said, “belongs to all races and faiths” and is “not a Taliban state.” In response, a religious teacher who supported the ban on non-Muslims insisted that “we are a Muslim country,” and that in taking a stand he was “carrying out my responsibility to spread Islamic teachings.” The Conference of Rulers then stated its concern to protect “the harmony that currently exists within our multi-religious and multi-ethnic society.”

The rulers were conveying that, despite being “heads” of Islam, and despite the king’s constitutional duty to “safeguard the special position of the Malays,” they consider themselves to be reigning over all their subjects, irrespective of ethnicity. The Constitution, in fact, refers to “rulers,” not “Malay rulers,” and there is a long record of Malaysian rulers speaking in an ethnically inclusive manner. Just what role the rulers might play in shaping a Malay Malaysia, however, will depend not only on their ability to attract non-Malay support but also on their skill in handling the increase in both Islamic and Malay nationalist demands.

Malaysia is a society in transition. Malay ethnic demands, far-reaching Islamic aspirations, and royal assertiveness—each in its particular way challenges the liberal, secular structure that many saw being ushered in with the 1957 constitution. These concepts are all, however, embedded in that document—waiting, as it were, for future opportunity. If the Najib government fails to achieve a comfortable victory in the coming election, the task of accommodating and juggling Malay, Islamic, and royal claims—and also the growing demand of the East Malaysian states for greater autonomy—will be all the more formidable. 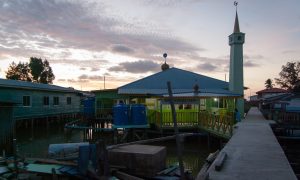 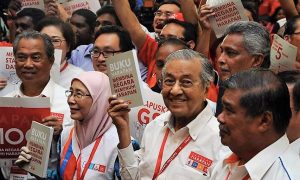 Funding an opposition’s manifesto is all about politics

Pakatan Harapan's policy promises will sound great to many voters, but how would a PH government pay for them?