Is a ‘Malay tsunami’ on the horizon?

As a student of Indonesian politics—who maintains an interest, but no particular expertise, in Malaysian affairs—it seems to me there’s one simple and compelling argument for why Barisan Nasional (BN) will win today’s election: namely, that elections in Malaysia just aren’t a fair contest, and aren’t meant to be.

The government owns or controls most of the mainstream media, it has access to a bigger pool of campaign funds and state resources, it restricts and even jails opposition candidates from running for office. Gerrymandering and malapportionment create almost-insurmountable obstacles for opposition parties, even before you get to other Electoral Commission funny business.

So it’s hard to disagree with the assessments of political scientists like Meredith Weiss (a regular contributor to New Mandala), who wrote in 2011 that Malaysian elections “serve more to legitimate the existing government’s continued rule than to offer a chance to change the government.” Lee Morgenbesser argues that elections under the auspices of authoritarian regimes like Najib Razak’s just reinforce authoritarianism, rather than promote democracy. Elections are a means for BN to distribute goodies to its base and gain a fine-grained measure of its popular support, while allowing for the controlled and ritualised display of opposition that allow opponents to blow off steam—and indulge in the fantasy that they might one day actually win—without really threatening the government’s hold on power.

So why, despite the cards being comprehensively stacked in Najib’s favour, does the result of Wednesday’s election still feel so uncertain for experienced Malaysia-watchers?

It was this lingering uncertainty, in spite the undeniable barriers to change in Malaysia, that animated a public discussion on GE14 held by the ANU Malaysia Institute in Canberra on Monday 7 May, which featured ANU Malaysia experts John Funston, Amrita Malhi and Ross Tapsell in conversation with Diana Anuar.

One thing the panellists agreed upon was that predicting the outcome of the election was difficult, for a few reasons. The first is Malaysia’s electoral system: it’s well known that the country’s single-member electoral districts are malapportioned and gerrymandered so as to give an outsize voice to rural mostly Malay-majority seats, as well as to the Borneo states of Sabah and Sarawak.

That means that national-level opinion polls aren’t a very useful tool for predicting the outcome of the election. What’s important is not how many people vote for BN or Pakatan Harapan, but who and where. BN won only 47% of the popular vote at GE13 in 2013 yet retained a comfortable parliamentary majority (it being theoretically possibly to form government in Malaysia with less than a fifth of the popular vote.)

The big question this election is whether the appointment of Mahathir Mohamad as figurehead of the Pakatan coalition will boost the opposition’s changes in the Malay heartland areas that are most overrepresented in parliament. Malaysian politicos are calling this scenario the “Malay tsunami”, and in John Funston’s analysis, “if [it] does emerge, that could well sweep away the efforts of the Electoral Commission to provide the government with a majority”.

But it would be foolish to underestimate the pull of Barisan’s patronage for its support base, or to overestimate the effect of corruption scandals in diverting BN voters towards the opposition. ANU’s Amrita Malhi observed that discussions with opposition insiders revealed that “they found that the 1MDB scandal didn’t work with a lot of people,” who didn’t connect lurid tales of multibillion-dollar corruption cases to their own day-to-day experiences. Instead, “[the opposition] decided to just link it to cost of living pressures”: public services suffer and taxes rise, the opposition line goes, to plug the financial gaps created by elites’ wrongdoing.

Keeping in mind the usual caveats about the reliability of polls in Malaysia, recent surveys from the Merdeka Center suggest that the “Malay tsunami” won’t be big enough to get Pakatan over the line. Ross Tapsell’s observation from the Malay heartland state of Kedah was that “ethnic Malay voters have more choice in this election. And coupled with smartphones allowing for more personal interaction with individual parties and candidates, the local candidate is crucial.” His sense was that PAS voters will stick with the party, which left the opposition coalition to compete in GE14 as an “independent” entity—though in reality, it’s now seen as effectively UMNO-aligned.

The anti-status quo mood being sensed by many observers is certainly there. But in the absence of the seat-by-seat opinion polling that’s required to reliably predict the outcome, even the best analysts are reliant on educated guesswork about how popular sentiment will translate into voting behaviour. Attendance at opposition rallies and ceramah do suggest an upswell in enthusiasm for regime change, even in areas where BN has long dominated. Whether that represents an intensification of support for the opposition, or that they’re winning over formerly pro-BN or disengaged voters, will only be known later tonight. Large attendance at rallies has not always been a reliable indicator of the vote, as we learnt at GE13.

Nevertheless, when the audience pressed our panel of experts to have a punt on what Wednesday’s result would be, a few scenarios were floated.

John Funston thought that the most probably outcome was a win for Barisan but with a reduced majority. Even that result would, he said, lead to significant changes within UMNO; “if there’s a weak victory for Najib, all sorts of possibilities emerge”. Amrita Malhi agreed, noting that in a recent interview with Bloomberg, Najib said that he wasn’t expecting a landslide in his favour. “If he’s saying it’s going to be like that, then that’s as good a prediction as any.”

If we take a long view, though, the significance of GE14 won’t necessarily be determined by who wins. Rather, it will be a milestone on a path towards considerable different outcomes for Malaysia. 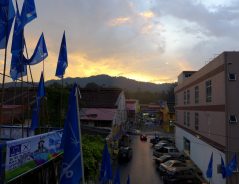 For John Funston, the election is not just a contest between two party coalitions but “also a contest over what type of state Malaysia is going to be: an Islamic one, or a secular–liberal one.” The spectre of an UMNO–PAS governing alliance after GE14 only adds to worries about the acceleration of the Islamisation of Malaysia’s legal system—something, he notes, that UMNO has already come to endorse “to shore up [Najib’s] support” with the PAS leaders and supporters, who are now untethered from the opposition alliance.

Amrita Malhi speculated on the longer term endurance and evolution of the electoral authoritarian political model. For a long time, she says, the system has been “working the way it’s supposed to”, containing the level of competition to deliver regular victories and legitimacy for BN. But “the system has reached its limit in terms of its capacity to contain the level of competition that’s increased since [the 2008 election]”.

For me that raises the question: if even unfair elections can’t deliver the legitimation and stability that Malaysia’s hegemonic party needs, what methods of continuing their rule do they turn to next? No matter what happens today, this will be a milestone election for one reason or another—and not necessarily in a good way.

Keep to date with analysis and observations of the results as they come in at New Mandala’s election night live blog, which begins at 5:00pm MYT/7:00pm AEST on 9 May. 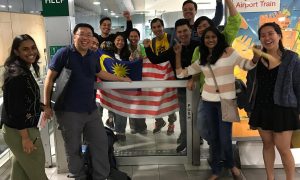 As Malaysians head to the most contentious elections since Merdeka, its citizens abroad are valiantly overcoming great odds to get their votes counted. 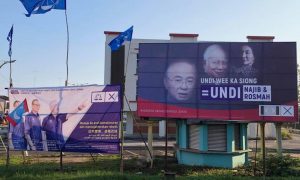