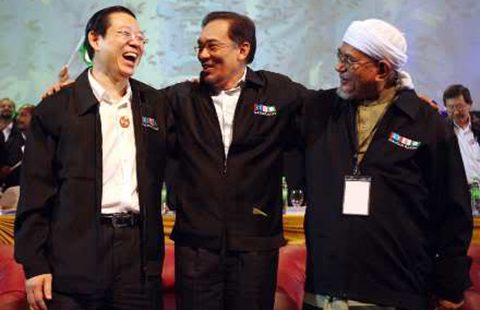 What’s next for Malaysia’s opposition movement?

Seven years after it was formed, Malaysia’s most successful three-party opposition coalition, the Pakatan Rakyat (People’s Pact), is officially dead.

This is a blow for the many Malaysians who support an alternative to the Barisan Nasional regime that has ruled Malaysia in one form or another since 1957.

The final blow came from Democratic Action Party Secretary General Lim Guan Eng, who announced two days ago that the PR “ceased to exist.” The proximate cause of that, in turn, was a recent decision by the general assembly (muktamar) of the Pan-Malaysian Islamic Party (PAS) to stop collaborating with DAP. This followed what Bridget Welsh has called a “purge of the progressives” during the muktamar, in which conservatives from the “ulama wing” grabbed all of the party’s important leadership posts.

And in 2013, after the results of the 2013 General Election came in and remarking upon Anwar Ibrahim promise to step down, I observed that

Without the pluralist PKR and Anwar’s dynamic leadership, it is unclear how a largely Chinese social democratic party and an Islamist party can remain in the same coalition.

Back in 2007, writing in the wake of the split of the Barisan Alternatif, I was sceptical about the possibility of cross-ethnic cooperation in the near future. That was wrong: cooperation did work from 2008 until 2015, and generated a majority of votes going to PR instead of the BN in 2013.

We now face the possibility that PAS will cooperate more formally with UMNO and BN. Such cooperation would align Islamic and Malay-nationalist agendas (which have quite a bit in common anyway) while further sidelining non-Malay and non-Muslim voices in this diverse multi-ethnic and multi-religious country. This makes sense from UMNO’s perspective given that UMNO now dominates BN to an unprecedented extent, and no longer has a parliamentary supermajority.

So what’s next? There are four important places now to watch.

First, Persatuan Ummah Sejahtera Malaysia (PasMa), which translates to something like the “Union of the Faithful for a Prosperous Malaysia.” PasMa describes itself as a “watchdog” group to ensure that PAS does not cooperate with BN, and represents (after a fashion) those progressives who have been purged from PAS. And its chief Datuk Phahrolrazi Zawawi is now calling for a new Islamic party to participate in a new opposition coalition. Can PasMa be that party? Only time will tell.

Second, PKR, the People’s Justice Party. Its stance is firming up as I write this: PKR has already echoed Lim Guan Eng in declaring PR dead. Quo vadis PKR? It is not yet clear.

Third, the BN’s component parties. If PAS moves to cooperate more formally with UMNO, then UMNO and the non-Malay parties face an interesting choice. The non-Malay parties will almost certainly resist bringing PAS into the coalition, for that dilutes their voice even further and threatens their core interests as well. Yet I would not rule out a formal alliance between UMNO and PAS in the near future, even if the non-Malay parties quit in protest. If so–and believe me this is a hypothetical–this would signify the most significant party system change in Malaysian history.

And fourth, state-level PR governments. Yes, PR is dead, but PR-based coalitions still rule in important states such as Selangor, Penang, and Kelantan. Selangor is the critical case: here, unlike in Penang or Kelantan, PAS must remain in alliance with PKR and DAP for the government to stay together. Will it? Selangor is a relatively prosperous, multi-ethnic, “suburban” state near Kuala Lumpur, not a rural northern Malay heartland state.

It is also the site of the infamous Selangor crisis. PAS members there almost certainly differ from party members in the Malay heartland.

This may be where to look to see where Malaysian party politics is heading. Selangor Backbenchers Club chairman Ng Suee Lim recently said that the government would remain in power so long as the three parties “could still agree on certain common issues and be respectful to each other”.

We will have to see if that will be possible.

Tom Pepinsky is Associate Professor of Government at Cornell University. You can read more of his writing at his blog.