This forum examines the dynamics of the upcoming national election in the Philippines. Will Leni Robredo be able to overcome Bongbong Marcos’s decisive lead in the surveys? What are the interests of external actors in the election? How well prepared is the Commission on Elections to oversee the polls?

Paul D. Hutchcroft is Professor of Political and Social Change in The Australian National University’s Coral Bell School of Asia Pacific Affairs (of which he was founding director, 2009-2013). While on secondment from ANU, between 2013 and 2017, Hutchcroft served as Lead Governance Specialist with the Australian Embassy in Manila. From 2018 to 2021, he was the overall chief investigator of a $2.1 million Australian government grant to ANU to support a range of research and advocacy projects on democracy, human rights, and the rule of law in Southeast Asia.

Marites Dañguilan Vitug is one of the Philippines’ most accomplished journalists and authors. For close to a decade, Vitug – a Nieman fellow – edited Newsbreak magazine, a trailblazer in Philippine investigative journalism. Her recent book, Rock Solid: How the Philippines Won Its Maritime Case Against China, has become a bestseller. She is among the authors who contributed to a 2021 book, Maritime Issues and Regional Order in the Indo-Pacific, published by Palgrave/Macmillan.

Attorney Ona Caritos is Executive Director of the Legal Network for Truthful Elections (LENTE). She received her B.A. in Political Science and Government from the Ateneo de Manila University in 2004, and a Doctor of Law (J.D.) from the Ateneo in 2008. LENTE is a nationwide, non-partisan network of lawyers, law students, paralegals, and trained volunteers engaged in vote monitoring and legal work for honest elections in the Philippines. It works closely with various civil society organisations to promote human rights and a rights-based approach to elections and governance.

All opinions expressed are the panellists’ own and do not represent those of The Australian National University or the Australian Government. 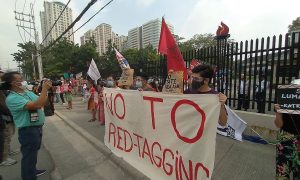 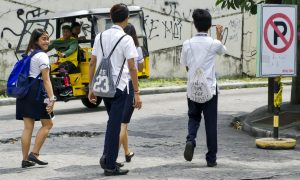 Many Filipino students don't have computers or internet access for online learning during COVID-19. On "subaltern social media strategies" for demanding equitable access.

Residents were consulted and active in food distribution activities run by non-governmental organisations, but not consulted in relation to government-run activities.