When I was a child, elders repeatedly warned us never to argue with anyone older. They taught us that it is very disrespectful for a young person to question people in positions of authority—priests, police, teachers. If we do, they warned, we might succumb to gaba (a curse) that may affect our descendants-to-be up to the seventh generation! Such threats made us resort to padungog-dungog, a strategy to raise our concerns and interests without the fear of being cursed. Padungog-dungog is a Cebuano term which means dropping hints, implying, or referring indirectly. It can be done verbally, through actions, or in writing such as social media posts.

Throughout the current pandemic, the youth of today are still resorting to padungog-dungog as a tool to express their sentiments. When some schools pushed for online classes amid COVID-19 restrictions, college students took to social media to express their disgust. They resorted to padungog-dungog as a survival tactic, a strategy to seize self-representation while avoiding punishment from their schools and parents (as well as to avoid gaba!)

The problem with online classes is that many students in the Philippines, especially Mindanao, have neither a computer nor access to the internet. Internet speeds in the Philippines are some of the slowest in the world. Internet cafés are also currently closed as part of community quarantine protocols. I spoke to one student who has to visit a classmate’s house to use a computer. Another needs to climb a hill just to connect to the internet. In May, students blamed the Commission on Higher Education (CHED) when a student from Capiz province died in a motor accident on the way home from a computer shop, where she was apparently working on a class assignment.

Taught to not defy instructions and question those who are older, youths have avoided directly criticising online learning. Instead, they have flooded social media with padungog-dungogs to express their frustrations with online classes. Statuses include, “I failed to answer my teacher’s call for our online oral recitation today. I was at work, sigh!” and “Which is more important: buying mobile data for an online class, or buying rice to eat?” Memes about online classes are also spreading like the virus. One viral meme depicts a student telling his teacher that he will be absent the next day because his mobile data will expire soon. Social media is a perfect platform for padungog-dungog as it allows users to express their thoughts without directly confronting anyone. It is up to a reader to interpret whether a post is about them. In this meme, a student tells their teacher that they will be absent tomorrow. Teacher: “But why? Do you have a fever?” Student: “No teacher, my mobile data will expire tonight.”

According to Spivak, being unable to speak and not having the space to speak is characteristic of the subaltern, those deprived of access to social mobility but who may exercise informal forms of power to exercise agency and survive. If youths use padungog-dungog to express their dissatisfaction with online learning, how effective is it as a strategy of resistance? If those in power recognise, read and empathise with those padungog-dungogs, to what extent do they act?

Overall, the authorities have responded positively to the outrage. In May, the CHED admitted that fully online classes are “not viable,” calling for flexible learning combining both online and offline teaching strategies. Some schools in Mindanao have developed a spectrum of class models to give students options for the upcoming semester: face-to-face, online, and home-based learning based on print-out modules. The latter model is not perfect, as there is limited input from the teacher. But it is an option for students both lacking internet access and facing difficulty in paying for transportation costs to school. It is also a safer option for those at risk of being infected by the virus. Meanwhile, some community groups have initiated campaigns calling for free mobile credits for students.

If students had kept silent, it is very unlikely that these developments would have occurred. Of course, credit is also due to other forms of collective action including written petitions from student organisations who were brave enough to lobby against structural challenges impeding their learning, as well as some limited protests. But the growing recognition of both schools and the state that online education is not viable is partly because of padungog-dungogs—less explosive, but nonetheless real  resistance reflective of the everyday forms of dissent chosen by those with less power.

Many youths in the Philippines still believe that education can be a tool to achieve their dreams and get out of poverty. My personal experience manifests that. But structural challenges brought by the new normal have unfortunately turned education into an additional burden for some. I hope those in authority listen to the padungog-dungogs of youth, as if they are talking with them face-to-face. Let us help our youths to realise that believing in their dreams is valid—and that expressing their sentiments will never inflict a curse on their descendants-to-be! 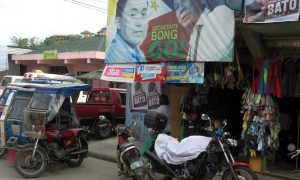