"Election Posters" by D-Stanley is licensed under CC BY 2.0

As the world fights the COVID-19 pandemic, developing countries like the Philippines struggle to maintain economic stability and social order. Under forced quarantine, many Filipinos, especially informal settlers and impoverished households in urban areas are experiencing hunger and anxiety; they have lost their jobs and have received little to no compensation. Financial assistance from the government has yet to reach all targeted households.

National and local government agencies have been severely criticized because of their uncoordinated and inefficient responses to the pandemic. In response, the government’s supporters took to social media to silence the opposition. “Ano ba ang ambág mo?” (What have you contributed?) they snapped, with President Duterte himself using the phrase in one of his late night press conferences last April, “What have you done for the country except to talk and criticize and talk?”

Critics of the government fired back. Some emphasized the vital role of criticism in a democracy; others stressed that censuring and supporting the state are not mutually exclusive; they pointed out that the demand for ambág precludes any notion of loyal, constructive criticism, and that criticizing the government does not mean they wish it to fail. Others believe ambág to be misguided, invoking their taxes as their default contribution and adding that it’s mainly the government’s job to address the crisis. Former Senator Antonio Trillanes, responding to Duterte’s call for ambág stated, “four trillion ang budget mo, tapos hahanapan mo ako ng ambag?” (Your budget is four trillion, and you’re looking to me for contribution?).

By and large, analyses and criticisms of the Duterte administration before and during the COVID-19 pandemic have largely turned on a democratic-autocratic binary. However, the deployment of ambág also shows that pro-Duterte politics springs as much from an outright illiberalism as from a deeply communal ethic. In bringing attention to the sociocultural norms that shape politics, we foreground a key feature of populism in the Philippines. Also, even if ambág has been used for a repressive and politically intolerant discourse, we argue that politics in the country should be grounded in such values, which can serve as a basis to advance liberal democracy.

Ambág and Bayanihan in Philippine Politics

In everyday parlance, ambág refers to the contribution of a member to a group’s initiative. That can be a simple get-together or night-out where some bring food, while others chip in for the drinks. Internet memes depict friends hogging everything despite making no contribution to the party or starting drinking sessions and leaving early without their ambág. These free riders are jokingly portrayed as a nuisance.

The COVID-19 crisis, however, reveals the political valence of ambág beyond its mundane origins; it implies an ethic of active membership and direct participation in a community. This community could be a nation, to which each citizen must contribute (apart from their taxes). Because of its communal dimension, ambág invokes the concept of bayanihan (from bayan, meaning a community ranging from a town to a nation), which refers to a community helping out a member reap his harvest, or a move to a new home. A traditional image of bayanihan shows people literally carrying a house on their shoulders. Nowadays, it generally means mutual aid, or any collective effort. For instance, the law granting President Duterte emergency powers to respond to the pandemic was named “Bayanihan to Heal as One Act.”

Together, ambág and bayanihan posit a communal relationship between individual citizens and the country as a community by and large. By extension, everyone is subject to, and is obliged to do his part for, the nation. In itself, the communalism of ambág and bayanihan seems admirable enough. However, just as ambág can be invoked in everyday life as a disciplinary mechanism against free riders, it can be used to censure critics and assert state power.

Deflecting criticisms against the government’s pandemic response, Duterte’s supporters have demanded that everyone simply obey and help out. “Sumunod na lang kayo” (All of you should just follow) and “Tumulong na lang kayo” (Just help out) are their common refrains. For the regime and its supporters, obedience and assistance to the state is one’s primary contribution. Hierarchy matters and citizens should know their place. In this interpretation of ambág, there is no room for loyal criticism.

This framing of ambág censures critics, portraying them as mere freeloaders hampering government success and the survival of the nation during the current pandemic. Following Kusaka’s concept of moral politics, ambág posits an ethical divide between Duterte’s supporters who obey (good citizens), and critics who do not (bad citizens). Paradoxically then, ambág expresses a deep-seated political intolerance in the name of the community,  even as it splits that community at the very moment it is invoked.

Moving Between Communalism and Democracy

Although ambág and bayanihan have been deployed for populist ends, foregrounding these values can help us confront illiberalism on its own terrain, and advance liberal democracy based on such norms rather than just on the ideals of dissent and rational debate.

Our argument implicates the debates on the role of endogenous culture in politics, exemplified by prominent works like Lucian Pye’s Asian Politics and Power: The Cultural Dimensions of Authority (1988), Benedict Anderson’s essay, The Idea of Power in Javanese Culture (1990), and Lawrence Harrison’s Culture Matters Research Project that started in 2002.

Some works on this subject have exposed the Eurocentricism of political analysis. At the same time, cultural norms have been invoked by authoritarian regimes to legitimize its rule. For instance, Asian Values were mobilized in the 1970s and 1980s to justify stifling liberal democratization in the name of economic development. Similarly, in the Philippines, Remigio Agpalo argued in a landmark work, The Organic-Hierarchical Paradigm in Politics in the Philippines (1973), that Filipinos see society as an organism, and that Philippine politics features a pangulo (from ulo, meaning head; president) who leads the entire body politic comprised of interdependent parts.

He advocates for “a Filipino liberal democracy” in this monograph and states that “symbiosis and paternalism” govern the relationship between the elite and the people. However, a key feature of The Organic-Hierarchical Paradigm—the pangulo regime—seems like a justification for a strong state at best, an autocracy at worst.

The pangulo regime, and the Organic-Hierarchical Paradigm belonged to an era that sought to indigenize the social sciences in post-war Philippines. And Agpalo’s work would not be the last time a politics would be anchored—for better or worse—on Filipino culture. More recently, cultural concepts have been deployed to reject or excuse Duterte’s politics.

Without denying the illiberal politics of nativism, we call for a more optimistic and productive take on the salience of culture in a democracy. After all, as Gramsci and Lefebvre have shown, power, as well as liberation or subjection, is grounded and contested in culture and everyday life. Accordingly, such terrain must never be left to illiberals and populists; it must be contested—and appropriated—in the name of democratic politics.

Moreover, grounding democracy in ambág and bayanihan can help heal the polarized political landscape in the Philippines. With both values as a common starting point, it is possible to reconcile the communal ideals of pro-government populists, their demands for individual contributions, and the democratic ideals of civic participation and citizen empowerment.

An illustrative example of the compatibility of local culture with progressive politics could be seen, at least in discourse, in an alternative deployment of bayanihan. In a 2014 statement, the Partido Lakas ng Masa (Strength-of-the-Masses Party) called for “Bayanihan Sosyalismo” (Bayanihan Socialism), citing its “communitarian spirit,” and related notions of “community assistance,” “solidarity,” and “mobilizing support and assistance for our people in need.” As one of many “attempts to give local colour to the socialist system based on the particular history and characteristics of the countries concerned,” Bayanihan Socialism recognizes space for individual contributions.

…the new socialism is measured by the social services and gains that it provides to the people, including decent housing, free health care, free education, free public transport, electricity, water, food and other people’s needs. These also require the empowerment and mobilisation of the people in every aspect of implementing and expanding the social programs (emphasis ours)

…In the new socialism, the focus is on supporting each other, based on the recognition that national and human development should not be based on the oppression of others……the new socialism envisions a society where each individual feels obliged to assist others based on their capacity to support (emphasis ours).

Bayanihan Socialism is not the only model for local culture serving as a foundation for progressive politics. Grounding democracy in ambág and bayanihan also resonates with Benjamin Barber’s notion of strong democracy. This refers to a combination of institutions with an expansion of effective participatory venues for ordinary citizens. A strong democracy further develops representative institutions so that eligible members (those with voting rights, for instance) can have a larger and more efficacious role (their ambág) in making and implementing policy in villages, towns, if not cities. Filipino citizens, however, are largely excluded from key policymaking. For instance, the Inter-Agency Task Force (IATF), which was activated in late January 2020 to address the growing threat of COVID-19, is comprised mainly, if not wholly, of state institutions.

This exclusion has not precluded the private sector or civil society from addressing the COVID crisis. Several collective and grassroots initiatives such as Pay It Forward PH and other private sector projects have provided badly-needed equipment to medical workers. Academic and research institutions such as the De La Salle University – Jesse M. Robredo Institute of Governance and the UP School of Economics are also formulating scientifically informed recommendations to help local governments draft their own crisis management policies. These projects address problems in areas and aspects the government is unable to reach. However, they spring more from citizens’ own initiatives than from their duty to help under formal, institutionalized communal efforts. 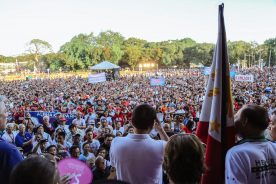 By contrast, a strong democracy, which directly integrates citizens into government policymaking, institutionalizes the spirit of ambág and bayanihan. More importantly, it bridges the gap between state and society, and helps cultivate a sense of unity and community. In the context of COVID-19, a strong democracy would have strengthened the presence of civil society and private sector in the IATF. In this arrangement, the government (and its supporters) can no longer demand ambág, which citizens will have supplied by design.

“What the Philippines is experiencing,” wrote Nicole Curato after the 34th anniversary of the 1986 People Power Revolution, “is a renegotiation of the story the nation tells about itself.”

In the same way, how Filipinos understand and tell the story of populism will determine how we respond to its challenges, and influence both the nature of Philippine democracy and its development. We believe the task is not just to address populism solely as a political question but also as a socio-cultural one. Democratising the notions of ambág and bayanihan is a way to renegotiate the story of Philippine politics and mount an effective challenge to the divisive autocratic threat amplified by the current COVID-19 crisis.