Image by Judgefloro, CC0 on Wikimedia

In the span of almost two months, the Luzon-wide imposed lockdown has managed to stall the Philippine economy and bring about a socio-economic crisis adjacent to the public health issue at hand. President Rodrigo Duterte and his administration are now challenged with keeping the global pandemic at bay, while also keeping the Philippine economy viable. But how has he done so far?

It is hard to precisely quantify the impact of the pandemic’s effect on the Philippine economy in practical terms. The Asian Development Bank (ADB) projected GDP growth to slow down to 2.0% this year; the National Economic Development Authority (NEDA) meanwhile has projected a contraction of anywhere from 0.6 to 4.3%, or a cumulative loss of anywhere from PHP 428.7 billion to PHP 1.355 trillion.

But the real impact can be seen “on the ground”, and through the lens of the Filipinos affected by the pandemic.

In Luzon, which comprises 73% of the national economy, NEDA estimates as many as 1.8 million workers have been displaced by the lockdown, while IBON Foundation estimates a total 14.5 million workers dislocated in varying degrees, including vendors and other workers in the informal sector.

In order to combat this, IBON estimates that PHP 297.1 billion would be needed monthly in order to sustain an estimated 15 million families, 15.9 million workers, 9.7 million farmers and fisherfolk, 3.8 million senior citizens, and 1.8 million insurance pensioners. The Duterte administration has already allotted PHP 316.2 billion for the response, which might prove to be inadequate in the long term should the lockdown extend after May 15.

It becomes clear that a key to mitigating the socio-economic impact of the pandemic is to contain the virus as quickly as possible and return to a semblance of a working economy. The longer the imposed lockdown takes place, the longer will it bleed the Philippine economy dry.

But it seems that mass testing is the least of Duterte’s priorities. On March 20, the Department of Health stated that mass testing was “not needed” at the time, despite the steady rise of cases at that point. It was only a month later when the government relented and began stepping up efforts for mass testing, with a target of “30,000 tests per day by the end of May.”

So where does the administration’s focus lie? In the span of 35 days since the formal start of “enhanced community quarantine” on March 17, there have been 136,517 “violations”, while PNP chief Archie Gamboa admitted to intruding to impinging their basic rights like privacy in order to “safeguard public health.”

In Bicol region alone, the PNP has reported to have arrested over 2,114 people over misdemeanors such as violating curfew hours, disobedience, or in the case of 16 individuals, overpricing of medical supplies and other essential goods.

In other cases, people get arrested for “spreading misinformation” or “fake news” about COVID-19, as in the case of Noveleta, Cavite mayor Dino Reyes Chua.

This loose definition of “misinformation”, however, has extended to legitimate criticism. In Cebu province, governor Gwendolyn Garcia challenged Today’s Carolinian editor-in-chief Berns Mitra to defend the assertions his paper made in an editorial, while in General Santos City, 55-year old teacher Juliet Espinosa was arrested over a Facebook post criticizing her city’s mayor. Not even satire was safe, as when Cebu City mayor Edgardo Labella ordered the arrest of artist Maria Victoria Beltran over a satirical post she made on Facebook, or when the Philippine Overseas Labor Office requested to have Filipina caregiver Elanel Egot Ordidor deported from Taiwan over “nasty remarks” that were “intended to cause hatred” amid the COVID-19 pandemic.

In the worst cases, this cavalier attitude to the law has led to police killing ECQ violators, as in the case of Corporal Winston Ragos, a retired veteran of the Siege of Marawi suffering from post-traumatic stress disorder.

But a more troubling statistic in the Duterte administration’s “war” against the “COVID-19 invasion” are the harassment and other human rights violations. In the span of two months, at least 66 workers have reported cases of harassment, ranging from visits by the police to flat-out abduction and accusations of being members of the communist New People’s Army.

One such current target are the workers of the Coca-Cola Femsa Plant in Santa Rosa, Laguna, whose union leaders currently face threats of harassment from the police and military over accusations of being “recruiters for the NPA.”

On May 1, Labor Day, 16 Coca-Cola workers were presented to the media as “former rebels” who have decided to surrender. Of the 16, ten of them were newly-hired contractuals. One of them, Rafael Baylosis, is a former union leader-turned-police asset. During the presentation, Baylosis called the Coca-Cola workers’ union, as well as labor federations Kilusang Mayo Uno and Organized Labor Association in Line Industries and Agriculture as front organizations for the Communist Party of the Philippines.

Not even legitimate relief operations are safe. May 1 also saw the arrests of 76 individuals nationwide, belonging to different organizations. 32 of these were members of organizations providing food packs and other relief operations to families who have nothing to eat during lockdown. 42 of them were activists from Iloilo province protesting the murder of activist Jory Poquia the previous day; one of them was his daughter Lory.

The same stories of harassment and suspicion of communism are also prevalent outside the urban centers. Military units frequently figure in reports of farmers’ houses being ransacked, or arrests of farmers on suspicion of being a member of the NPA. In one case, 19 year old Leoben Holeto was going home after a successful appendectomy when he was accosted by soldiers at a checkpoint and detained at a nearby school.

The Duterte administration, for all its bravado of wanting to combat the pandemic as swiftly as possible, has instead used the pandemic to further its own anti-communist agenda. Oplan Kapanatagan, the administration’s campaign against the CPP-NPA, and the National Task Force to End the Local Communist Armed Conflict (NTF-ELCAC) have both seen upsurges in activity since the March 17 lockdown declaration.

But despite its lofty goals, the NTF-ELCAC has so far managed to do the exact opposite. Instead of pursuing peace, military operations have intensified in the countryside, pushing more civilians towards the conflict.

However, during in the period between March 19 to April 14, the last day of the ceasefire, the CPP reported military operations by the Armed Forces of the Philippines in 96 municipalities and 196 barangays (villages). Despite this, the CPP extended its ceasefire until April 30 while the Duterte administration allowed theirs to lapse.

Aside from ceasefire violations, military and police agents have also used the lockdown to continue  their scare tactics by pushing its Enhanced Community Local Integration Program (E-CLIP) on workers, farmers, and civilians otherwise unaffiliated with the revolutionary movement.

E-CLIP’s intended purpose is to provide cash incentives to members of the Communist Party, New People’s Army, and its People’s militias to “return to the fold”, but the National Democratic Front of the Philippines insists that E-CLIP is being used as a “money-making scheme” and a tool to force false “surrenders.”

The Labor Day incident, reports from farmers in Quezon and other provinces, and other pre-lockdown incidents all tell the same story of harassment, accusation, and coercion to “surrender.” 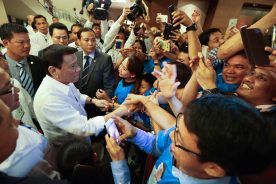 In a recent May 12 early morning broadcast, Duterte, who ostensibly was supposed to address the nation regarding the administration’s plans to combat the pandemic, instead offered a Php 2 million (USD 39.7 thousand) bounty for the NPA’s ‘top commanders’; leaving the actual task of explaining the government’s plans to his spokesperson, Atty. Harry Roque.

At the end of the day, the Duterte administration must take on the issue of COVID-19 – whether it truly wants to or not. The Philippines currently sits on more than 10,000 confirmed cases, and the World Health Organization isn’t too optimistic that the country can flatten the curve just yet.

To this end, the Philippines has managed to borrow more than USD 2.3 billion (PHP 116 billion) to combat the pandemic, including USD 1.7 billion from ADB and at least USD 600 million from the World Bank. The Department of Finance is meanwhile targeting an additional USD 750 million from the Chinese Asian Infrastructure Investment Bank, hoping to ultimately gather USD 5.7 billion (PHP 287 billion) in COVID-19 funding.

IBON however asserts that no loans are necessary – Duterte is well within his emergency powers to realign the budget. The money needed could be obtained by cancelling infrastructure projects that are no longer viable due to the pandemic, such as tourism-related infrastructure projects. Funding for dubious intelligence programs, an amount totaling PHP 9.6 billion, should also be scrutinized and re-aligned.

Of course, a quick response to COVID-19 isn’t all about the money. It would ultimately depend on where the Duterte administration’s priorities are, and if the past two months have been any indication, things are not looking up for the Filipino people. 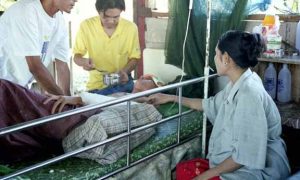 Waning philanthropy has exacerbated the risks COVID-19 poses to Southeast Asia.
But there are lessons to be learned.