The time has come where Philippine Rodrigo Duterte is no longer one of a kind. Last October, Brazil elected its very own populist, misogynist strongman in the form of Jair Bolsanaro.

The similarities could not be more pronounced. Both men ran on the promise of law and order, emerging from contexts plagued by crime and corruption. Both men are practicing penal or “criminal” populism. They are offering simplistic solutions to complex problems of development but what they have undertaken does not solve the issues of poverty, inequality, and corruption within their own countries.

The Philippines’ transition to democracy has left much to be desired. After the overthrow of President Ferdinand Marcos and the creation of a new constitution in 1987, the Filipino people hoped for a government that was free of corruption. However, the resultant People Power Government was ineffective and mired in scandal. As it stands, the Philippines has the highest level of poverty amongst ASEAN countries as well as the highest level of income inequality between the rich and the poor. This is attributed to widespread political corruption in the Philippines, which is suffocating the most marginalised communities. Before Duterte’s election, the Philippines saw an increase of 300% in serious crime from 2012–2014.  In addition, the autonomous Region in Muslim Mindanao is known for high levels of violent crime, murder, kidnapping and internal conflict. Duterte and other politicians have lobbied on the public’s fear of crime and drugs spreading across the country and into their communities.

Brazil’s transition to democracy has also been rocky. There has been tremendous growth in terms of wealth, but widespread poverty and inequality still plague the country. Brazil has one of the highest levels of urban poverty in Latin America and carries the same of having the highest levels of income inequality in the region. This is also attributed to corruption in government and business, which amount to an elite class of “Brazilianaires”. The well documented “Lavo Jato” anti-corruption campaign shed light on billions of reals in money laundering lining the pockets of politicians. Additionally, a record high 62,000 Brazilians died because of violent crime last year, including well known politician Marielle Franco. Seventeen of Brazil’s major cities are among the most dangerous in the world for violent crime. Undoubtedly, Brazil is becoming more dangerous and past administrations have failed to counter it.

There is no denying that the economic and safety issues of both countries contributed to the rise of these two populist strongmen. Duterte and Bolsonaro harnessed the frustration and fears of their citizens and rode on a wave of criminal populism. Their tough talk and rhetoric resonated with an electorate that was desperate for change.

Born into a political family, Duterte became the mayor of Davao City in 1988. Human rights groups claim his association to the Davao death squad, which targeted drug dealers, petty criminals, and even his political opponents leading to the death of over 1,400 people. Upon his nomination for president in 2015, Duterte emerged as a front runner because of his reputation for being tough on crime. He promised to kill over 100,000 criminals and dump their bodies in Manila Bay. He promised to rid the Philippine government of corruption in 3 months, by any means.

Despite or because of his inflammatory comments, he won the election in a landslide victory. Since Duterte’s election in 2016, over 4,200 people have been killed in anti-drug operations, with an additional 23,000 homicides under investigation. Human rights groups have condemned his actions and believe that the real numbers are much higher. Duterte has compared his war on drugs to Hitler, stating “he massacred 3 million Jews, there are 3 million drug dealers, I’d be happy to kill them.” Duterte extends no sympathy for whomever he labels as “criminal”, seemingly taking pride in their extinction. He now faces an inquiry for crimes against humanity from the international criminal court.

Jair Bolsonaro shares many similarities with Duterte. Bolsonaro has been a politician for over 27 years. He built a reputation as a controversial leader with his tough talk and provocative rhetoric. “A dead son is better than a gay one,” he once said.

As corruption scandals came to light and levels of violence reached new highs, Bolsonaro’s far right approach to these problems distinguished him from other politicians. He quickly became a front runner in the Brazilian election. Brazilians were tired of the scandal plagued Workers Party (PT). When Bolsonaro was pitted against the relatively unknown Fernando Haddad of PT in the presidential run-off, the contest became uncompetitive. Despite his ultra-conservative stances and controversial language, Brazilians were eager for someone to quell years of political instability.

Bolsonaro ran his campaign like Duterte’s. He focused on eliminating the country of corruption and crime. He promised to use the military to eradicate criminals. He wants to loosen gun regulations to allow people to defend themselves. Since his election, videos have emerged of police in Rio piling dead bodies into the back of vehicles. Politicians from Bolsonaro’s party praised the efforts to clean up the streets. He promises to fight violence, with violence.

Bolsonaro and Duterte have similar approaches of “cleaning up” their countries. They promise to do so with an iron fist. Nothing will stand in their way, not even the democratic traditions, norms, or constitutions of their states. They have degraded or threatened to purge their countries of the very institutions that make them a democracy. They are practicing creeping authoritarianism in their grasps of power, reminiscent of the dark days of authoritarian rule in both countries.

Duterte has attacked the press, even going so far as charging and arresting journalists critical of his government. He supports extra-judicial killings. He has declared martial law in parts of his country. He has ordered Congress to impeach a Supreme Court justice for having ideological differences. He has established a political climate of fear and faces limited opposition in congress. Duterte has all but eliminated the checks and balances established in the Philippine constitution. As it stands, there is very little to stop him or to oppose his mandate, and most people are too scared to speak out.

Bolsonaro has done or proposes to do similar things. He has attacked journalists and spewed the rhetoric of fake news. He has promised to relinquish control of the police and military, granting them less government oversight in their war on crime. He has appointed military figures to high government posts, including his vice president Antonio Hamilton Mourao, who admits that a “military coup could be a possibility” if crime continues to increase. Bolsonaro has stated that he has no trust in the Brazilian Congress or political system, threatening to shut it down or overthrow it. He has threatened his political rivals with jail. He opposes human rights and is pro-torture. He aligns more closely with military rule than to democratic order. 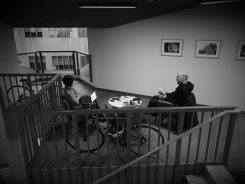 These two men rose to power as the world undergoes its own political transition. Donald Trump has praised Duterte and overlooks the criticism stemming from human rights organisations around the world. Bolsonaro also has a close relationship with Donald Trump, receiving the ultimate praise; a congratulatory phone call and tweet after his election. These three men have a strongman connection, empowering and emboldening one another’s dismantling of democratic order.

Ultimately, if the United States refuses to speak out against the erosion of democracy in these two countries and the extreme use of force against their own citizens, who will? And will anyone listen?

The main difference between Bolsonaro and Duterte involves the citizens of Brazil. The primary issue facing Bolsonaro, that Duterte does not have, is a large countermovement against him. The country was heavily divided in this election, and it is likely that his polling will look more like Donald Trump’s (40%) than to Duterte (upwards of 80%). He has yet to win over a large part of the country, and with his abrasive rhetoric, he most likely won’t.

This appeal of these strongmen is a part of the growing pains of these young democracies. It is a recognition of the failures of previous governments and demonstrates a need for change.

These men are practicing criminal populism. What they have undertaken does not solve the problems of poverty, inequality, and corruption within their own countries. They are simply lining their streets and favelas with dead bodies. They are fuelling a sense of fear and suppressing their people. Their campaigns hurt their most marginalised and disenfranchised citizens.  Crime rates may drop, but extrajudicial murders and homicides will increase, and already have in the Philippines. The favelas may empty, but they will fill again unless the governments tackle the complex problems facing their societies.

Citizens must not turn a blind eye to authoritarians consolidating their power as days go by. Citizens deserve better. Killing is easy, especially if the targets are the marginalised, the poor—those whose lives are often taken for granted by societies willing to turn a blind eye. Many innocent people are suffering and will continue to suffer long after these strongman’s reigns are over.