Marrying the Thai monarchy and modernity

The royal wedding between British Prince Harry and American Meghan Markle has heralded a new era of one of the oldest monarchies in the world. The constant reinvention of the British royal family serves to remind other monarchies of the need to stay relevant to avoid anachronism.

Eighty years ago, Meghan marrying Harry would have remained an impossible dream. In 1937, the American and twice-divorced Wallis Simpson wedded Prince Edward, Duke of Windsor, a year after Edward’s abdication. Simpson represented unwanted qualities and was disqualified from being a British queen. But in 2018, Meghan—also an American divorcee, biracial, and a Hollywood actress—was cheerily welcome into the Windsor family. Times have changed. So has the British monarchy.

Thousands of miles away, Thailand is among the few countries in Southeast Asia where the monarchy has survived. The royal wedding in the United Kingdom was examined thoroughly in Thailand both in printed and social media.

In traditional media, the coverage of the nuptials was extensive, stoked by the public’s curiosity over British royal affairs, and held as a mirror to Thailand’s royals. Printed media focused on two main elements: first, the awe-inspiring pomp that accompanied the British royal institution, and second, the cost of the lavish wedding. In the two elements, commentaries appeared highly paradoxical.

The grandeur of the British royal wedding, as portrayed in Thai newspapers, was taken as living proof of the necessity of the Thai monarchy’s own solemnity, even its divinity. Celebrating Harry and Meghan’s wedding became a tool to strengthen the royal institution in Thailand, amidst growing anti-monarchist sentiment.

On the other end of the spectrum however, reports in local Thai media taking the cost of the British royal wedding as a point of discussion could be taken as subtle criticism of the Thai royals. For example, the widest circulated Thai Rath newspaper published a story on the expense of the wedding, reportedly as high as 32 million pounds, and expressed plainly to its readers, “The British royal family bears the cost of the wedding”.

The cost of maintaining the monarchy has long been hotly debated in the United Kingdom. In Thailand, although discussing royal affairs risks lèse-majesté charges, since the coup of 2006, society has been more vocal about this aspect of the Thai monarchy: its profligate spending. Year-after-year, public funding for the Thai monarchy has risen, sometimes stratospherically.

During the reign of King Bhumibol, successive governments funnelled enormous funds intothe “Budget for the promotion of the dignity of the monarchy”. In 2013, for example, the budget amounted to US$395 million. After the coup in 2014, the Thai junta increased the budget for the monarchy by approximately 20 per cent, reaching around US$435 that year and US$536 million in 2015.

After the enthronement of King Vajiralongkorn, however, the budget for the monarchy was cut. US$123 million was allocated to the Thai monarchy in 2018. Still, extra funding streams from various ministries to promote the monarchy have not been curtailed. Overall, the Thai king still enjoys a far larger budget than the British queen. Britain’s Royal Household says that its annual sovereign grant is around US$52 million, although that does not cover costs such as security.

While reports seen in Thai Rath and other newspapers are mixed, Thai social media responded to the royal wedding in the United Kingdom more sensationally. The debate is divisive. On the one hand, the Harry-Meghan wedding allowed some regality to rub off on Vajiralongkorn’s controversial reign. In Thailand, the old discourse of France being “an unfortunate nation” with its abolished monarchy is juxtaposed with the pomp of the British monarchy, hitting home the important point of monarchy being a quintessential pillar of the nation. In a time of the Thai monarchy’s waning popularity, royalists hope to ride on Harry and Meghan’s popular wave to boost their own royal institution at home.

The point delicately raised by Thai Rath on the cost of the wedding was recurrently discussed in social media. Some argued against the use of taxpayers’ money on the monarchy’s private expenses. Despite the lèse-majesté law, comments on King Vajiralongkorn’s share of the public purse proliferated in social media circles. From this perspective, the Windsor wedding served as another blow to the unpopular monarch, who resides for much of the time in Munich, Germany.

Now that Thailand has entered into the tenth reign, Vajiralongkorn has sought to consolidate his rule, partly through a series of royal ceremonies. His father was cremated last year, an exercise that symbolically ended the era of Bhumibol and signalled the beginning of the Vajiralongkorn reign. His mother, Queen Sirikit, is bedbound. Should she pass away, Thailand will once again enter into mourning mode. The official coronation of Vajiralongkorn could fall after the Queen’s funeral. But the kingship of Vajiralongkorn will not be complete until he names the new queen of the Thai nation. All these ceremonies involve prodigious public spending.

Adaptability is a key to the monarchy’s survival. The high profile British wedding took place at a time of chaotic politics. Britain threatens Europe with Brexit. The United Kingdom’s new immigration policies are getting tougher. Nationalistic rhetoric is on the surge, both in Europe and in the United States. The wedding, watched by millions, was not just a plain fairy tale. There were serious political messages involving the new monarchy and global politics.

In Thailand, since the beginning of the new reign, the only change witnessed by Thais has been the resurgence of royal absolutism. It is ironic that while a royal wedding in the United Kingdom was partly extolled in Thailand as a symbol of adaptability, the royalists’ perception of the wedding between Harry and Meghan reflected a desire for their monarch to be more absolute. 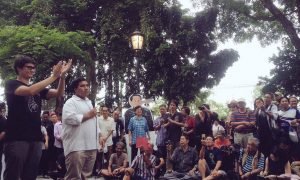 สี่ปีคสช.: สัญลักษณ์และประดิษฐกรรมแห่งการท้าทายอำนาจรัฐทหาร Activists never intended to use sandwiches during protests—it was the authorities themselves who seized upon sandwiches in 2014, making an unintended contribution to anti-authoritarian emblems. 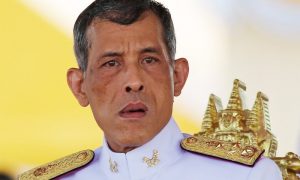 Risk, gossip and retribution in Thailand

Skydiving, insubordination and rule under the new king.