The twelve teenage football players who disappeared with their young coach on 23 June inside Chiang Rai’s Tham Luang Nang Non cave have been found. The rescue operation—the biggest of its kind in Thailand—has involved well over 1,000 people, including soldiers, geologists, medical doctors, Japanese irrigation experts, Chinese lifesaving specialists, and British and Australian divers. The King and other members of the royal family have donated money and rescue items. Even the premier, General Prayuth Chan-ocha, flew to the site to show his support.

As the rescue operation takes on unprecedented proportions, stories of true heroism are assuming Buddhist undertones. But the realm of myth also betrays underlying political tensions.

The myth of the reclining princess

In Buddhist Thailand, the relationship between human and cave is one of domestication. Caves are thought to harbour a special kind of substance-like power, which may be accumulated by the virtuous men who dare to enter them. Ascetic religious practitioners like monks and hermits (ruesi) are among those daredevils. By meditating inside a cave, they tame the wild side of such power, transforming it into something that is beneficial to society. The shrines and offerings that can be seen inside caves throughout the kingdom are precisely meant to appease the spirits of whoever managed to domesticate that power, in exchange for their protection.

Tham Luang Nang Non—literally, “the reclining lady’s big cave”—is inhabited by the spirit of a princess from the ancient local kingdom (mueang) of Chiang Rung. Myth has it that the princess was impregnated by a commoner and that she sought refuge inside the cave while running away from her father, the king, who disapproved of her lover. Her plan was to rest inside the cave until her lover returned with some food, but the man was killed by the king’s soldiers. As he never got back to her, the princess stabbed herself to death. Her blood became the Mae Nam Mae Sai river, her reclining body becoming the Doi Nang Non mountain. She is now the guardian spirit (jao thi) of the cave—an obvious allusion to her own genitalia—and visitors are advised to worship her before venturing inside, or risk being killed by floods.

Myths, of course, always have political implications. This myth in particular carries a perceptible element of resistance to elite culture, and to the violence that allows kingdoms to come into being and sustain themselves. “Sovereign violence” in Thai history coincided with a process of centralisation, which subsumed localisms to the political, economic and cultural hegemony of Bangkok. Like the princess’ child, a more egalitarian society in which elite culture could have married popular culture remains unborn.

But the myth also suggests that the locality still harbours some kind of power, to which even visitors from Bangkok must pay respect if they wish to be spared. The princess, after all, is still potent and demands to be worshipped. While instrumental relationships with the Bangkok administration are welcomed by the locality, the latter is not willing to be passively subsumed by central culture.

The Buddhification of the rescue operation

Operating in a context that is imbued with myth, the state-managed rescue efforts cannot be disentangled from their political dimension. As extraordinary numbers of soldiers “braved the cave”, the military state engaged in a symbolic battle against the spirit of the locality.

State authorities negated the princess’ existence altogether, dismissing the myth as “superstition” (ngom gnai). Meanwhile, the rescue operation was narrated as a tale of heroism with Buddhist undertones. Rescuers were quickly praised for their selflessness, and social media users shared drawings in which bright halos emanate from their heads, reminiscent of the embodied meritorious power (barami) of Buddhist saints. Monks were invited to pray inside the cave. General Prayuth asked the blessings of the Supreme Patriarch of the Sangha, and a mass prayer vigil was organised at Bangkok’s Royal Plaza. 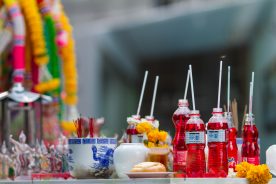 This Buddhist-inflected narrative echoes discourses that for centuries have depicted Bangkok’s takeover of the periphery in terms of a moral duty, which can only come to fruition by subsuming the supposedly uncivilised cults of the villagers to the purer form of religion that is represented by state-patronised Buddhism. As previously argued on New Mandala, the line between Buddhism and “superstition”—in Thailand like elsewhere—is drawn by the interests of those in power.

It is almost as if the state-promoted narrative of the rescue operation sought to put an end to the existing myth, and replace it with a conclusion in which the centre is finally able to take over the unruly periphery. The desired outcome—the rescue of the young footballers—was ambiguously made to coincide with the assertion of central power.

The media’s spectacularisation of the rescue operation has been extremely successful in compelling Thais from across the social and political spectrum, as well as foreigners, to support a narrative that subtly replicates the model of state violence. For the first time since its rise to power in 2014, the military state has been able to secure undivided support for its symbolic takeover of the locality. With the successful rescue of the young footballers, the central state eventually conquered the wild and harmful periphery, subsuming its power. Our genuine rejoicing at the successful outcome should not prevent us from acknowledging its politicisation in a narrative that mobilises support for a history of state violence.