The government of Prime Minister Prayut Chan-ocha released Thailand’s 2019–22 National Security Policy and Plan on 19 November. Prepared by the country’s National Security Council, the document adopts distinctively progressive language in its discussion of the challenges that Thailand faces in the international, regional, and domestic contexts. It thus suggests the current Prayut government’s acceptance of a range of liberal norms. This acceptance is, however, deceptive, particularly as regards the country’s domestic political order.

In addressing the international and regional contexts, the new National Security Policy leads with a discussion of the challenges that Russia and China pose to the global role of the United States and mentions the emergence of the US-Japan-Australia-India “Quad” as a means of shoring up America’s role in Asia. It refers to the growing importance of new powers such as the BRICS countries. And it takes note of the implications for small and middle powers in Asia of the rivalry between China’s Belt and Road Initiative and the vision of a Free and Open Indo-Pacific. Stressing the importance of Thailand’s relations with its Southeast Asian neighbours, the document affirms ASEAN solidarity, even in the face of differences among member-states’ political and economic systems and of the problems confronting the region.

Having taken stock of these concerns, the document calls for Thailand to play a creative or constructive international role, by engaging fully and actively with global problems. Its subsection on the threats posed by nuclear weapons and by weapons of mass destruction—neither of apparent direct concern to the country—is reflective of this ambition. So too is the document’s attention to non-traditional security concerns. These concerns include energy, the environment, natural resources, natural disasters, drugs, and human trafficking. Explicitly mentioning the need for an approach grounded in comprehensive security, the document invokes not only human security but also freedom from fear and from want.

The sections of the new Thai National Security Policy concerning domestic challenges share the same apparently progressive flavour. To be sure, and in line with six decades of official thinking, they give prominence to protecting Thailand’s monarchy as a matter of national security. The document notes the violence that has scarred Thailand’s Malay-Muslim-majority southern border provinces for a decade and a half. But in discussing that prolonged violence and its roots, the policy document avoids nationalist stridency. Rather, it explicitly notes the importance of historical factors and of injustices suffered by the people of those provinces.

The domestically focussed sections of the policy document also acknowledge that the deep political conflicts of the country’s recent past have their roots in social change. These sections recognise Thais’ determination to enjoy greater participation in policy formation and to defend their own and their communities’ rights. Further, they call attention to the problem of social and economic inequality, to popular interest in seeing prosperity and control over resources distributed more widely, and to a lack of confidence in the rule of law. They recognise the importance that Thais attach to the right to political expression and free elections.

The pronounced outward-looking and progressive aspect of Thailand’s 2019–22 National Security Policy appears to belie widespread criticism of the government that framed it. As Army Commander, General Prayut led the 2014 coup that returned Thailand to a half-decade of military dictatorship and then installed himself in the premiership. He owes his return to office following elections last March to a controversial constitution written under the auspices of that dictatorship. Critics have panned his current government as an extension of the previous military regime.

But recourse to coercion or naked repression is unlikely to prove successful in addressing many of the domestic challenges listed in the new National Security Policy: political grievances rooted in historical injustices, economic inequality, and a desire for the rule of law. In recognising the need to meet those challenges, the Prayut government does not propose an overtly hard line approach. Rather, it prescribes the inculcation of what it terms “immunity” (phumkhumkan)—to domestic threats to national security and to forces that might lead to conflict. The National Security Policy repeatedly invokes this need for immunity—in individuals, in communities, and in society as a whole.

To encounter this invocation of immunity in a document of this nature in the second decade of the 21st century is striking, even jarring. It appears in the National Security Policy not as a metaphor that the document develops, but as a straightforward and categorical policy imperative. The term is not in fact making its first appearance in the new policy document. It also appeared in a number of passages in the document that introduced the country’s first 20-year National Strategy, released last year under the military government.

In prescribing immunity to conflict and possible threats to security, both the National Strategy and the National Security Policy draw on a deeper current of social and political thought prevalent among conservative elites in Thailand. And, in releasing the latter document, the new Prayut government and the Thai national security establishment embrace liberal and progressive international norms relating to a broad range of concerns—from the environment to control over resources, social inequality, and political expression. But they seek at the same time to immunise Thai society against the contestation that serious efforts to address such concerns would inevitably involve.

The government and the national security establishment thus betray their fundamentally illiberal orientation—their continuing commitment to authoritarianism and depoliticised quiescence. As Prajak Kongkirati and Veerayooth Kanchoochat have argued, a commitment to the depoliticisation and demobilisation of Thai society accompanied political repression and the suppression of dissent under the administration of the 2014–19 National Council for Peace and Order. To ignore that commitment by focussing only on the junta’s record of harsh repression is to overlook the nature of its long-term vision for Thailand. At the heart of that vision is an approach born out of the Thai military’s experience of counterinsurgent warfare against the Communist Party of Thailand between the mid-1960s and the early 1980s. The approach centres on state-society relations unmediated by actors such as politicians and political parties, and free of the contests in which such actors engage. In her analysis of the localisation in Thailand of global initiatives aimed at bringing good governance and social equality to the provision of public health, University of California at Berkeley anthropologist Daena Funahashi calls attention to the same prescription for “immunity” found in the new National Security Policy. Advancing this ostensibly progressive agenda, elites working in the public health field—not least under the influence of former royal physician Prawase Wasi—argue for immunity to the appeals of allegedly self-interested politicians, putatively greedy partisanship, and excessive materialism. Such immunity represents in their thinking nothing less than a pre-requisite to the proper social and political order, and to good governance itself.

Calling attention to the stress on social immunity in Thai conservatives’ implementation of health programs, Funahashi describes an ideology of depoliticisation under the guise of neutrality and of appeals to the common good. Despite its apparent embrace of liberal and progressive norms as they apply to both the international and domestic contexts, Thailand’s new National Security Policy promotes that same ideology. 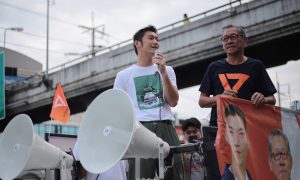 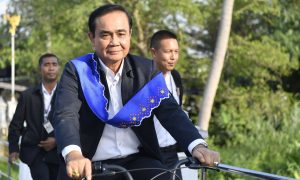