On the death of Karpal Singh, MP 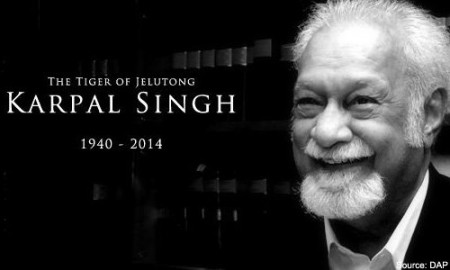 The Malaysian state may now,
if it so chooses,
be proud of the fact
[and rejoice forever in the ensuing glory] that its last official act towards this great man
was to find him guilty
of upholding the principle–
the uncontroversial and incontrovertible principle–
that the rule of law is the rule of law and that constitutional supremacy means exactly that;
and on those grounds,
absurdly and outrageously,
to find him guilty of sedition.

Karpal is now dead,
but Malaysia will long have to live
with the punishing cost to itself
of this tainted and unattractively pursued victory.

There are worse things in life than death.
Among them is the death of honour–
personal honour
and, even worse, national honour and reputability.

Karpal is dead.
but in this context–
a context produced by his government’s action against him–
Karpal has won,
and the Malaysian state,
out of its own folly
and its false and brutal, because power-driven, sense of pride,
has lost.

May Karpal’s memory long remain
a blessing and inspiration
to all who care for justice–
and a continuing reproach
to those who live by obstructing it
and frustrating its purposes.

Clive Kessler is Emeritus Professor of Sociology & Anthropology at The University of New South Wales in Sydney. Throughout the 1970s he taught courses, both undergraduate and postgraduate, about the Southeast Asian world and regional cultural history at Columbia University, New York.