Clive Kessler is Emeritus Professor of Sociology and Anthropology at the University of New South Wales, Sydney. He is the author of Islam and Politics in a Malay State: Kelantan 1838-1969 (Cornell U.P., 1978). He has closely observed byelections and general elections in Malaysia since 1967, and has written extensively on Malaysian politics, society, and religion for over 50 years, including at New Mandala since 2008.

The vulnerability of Malaysia’s legal discourse

The impact of an impoverished legal discourse on the Federal Constitution and human rights. 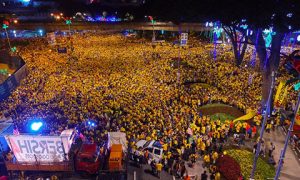 Mass rallies over the weekend proved a moderate victory for both sides of Malaysian politics, argues Clive Kessler.