In 2019, a year before the coronavirus outbreak annexed all questions of politics under the umbrella of security and emergency, the Workers’ Party (WP) chief Pritam Singh raised the possibility of a political inflection point: an opposition wipeout.

This seemed to be a call to action to party members and voters who might be concerned about the complete loss of opposition presence in parliament. As Singh pointed out at the WP Members’ Forum 2019, the WP had only a “toe-hold” in parliament, having held on to the Aljunied Group Representation Constituency (GRC) it won in the 2011 general election by a “razor-thin majority” (50.95%) in the 2015 general election.

His comment can  be read as the mirror to the ruling People’s Action Party (PAP)’s call to caution: protest votes, if the electorate are not careful, could lead to a freak result of total or near-total PAP loss.

If the PAP were to claim all GRC seats in the upcoming election, which Prime Minister Lee Hsien Loong has indicated could be called before the coronavirus outbreak is resolved, it would not be an entirely new affair, since this was the case for most of history since the GRC scheme was introduced in 1988. However, it would be a stinging rebuke of hope in building lasting political alternatives to the PAP.

It would be a monumental fortification and reassertion of what I think can be called PAP realism. In the immediate sense, as the name suggests, this describes the seeming inevitability of dominance of the PAP.

In another sense, PAP realism means accepting the conservative position of moderating one’s political aspirations and campaigns to align with values shaped by the PAP and validated by broad support given by the electorate to the incumbent.

The endgame, seemingly, would be to build a parallel political movement that might one day, given the right circumstances, break away or stand as equal. In short, PAP realism is an ideal predicated on being grounded in the present: in discipling political imagination.

The notion of a realism centred on cues taken from the ruling party is not a new idea in itself. In his 1997 book on the general election of that same year, The Price of Victory, the political analyst Derek da Cunha observed that the “more moderate the Oppositionist and the greater the similarity to the PAP the greater the likelihood of being elected”, disputing the view that people want a confrontational style of politics from the opposition.

Making his case, he pointed to the Singapore Democratic Party (SDP)’s victory of three seats in the 1991 election because people saw it as being similar to the PAP. Once Chee Soon Juan had taken over the SDP from Chiam See Tong, turning it from moderate to confrontational, the party “paid a heavy price by being wiped out” at the 1997 general election, da Cunha wrote.

Chee, who made a name for himself in the 1990s by staging acts of civil disobedience, remains the leader of the SDP, but has never broached the 40% vote count in elections, offering a contrast of fortunes with the WP.

The WP’s ascent, especially after Low Thia Khiang took over as leader in 2001, bears out a general need for caution. In March 2011, at a forum held by the National University of Singapore’s Political Science Alumni, WP chairman Sylvia Lim said, “If you want us to take over the government now, this is not the time. But it doesn’t mean we are not building up towards that day.”

Low did not dispute this, when asked for comments at a public appearance.  He said: “I am against all kinds of empty promises.” The WP, calling for a “First World Parliament”, would position its institutional role as a “co-driver” and, despite ridicule of this analogy by the PAP, claim its first GRC in May 2011.

With the swing back to the PAP’s favour in the 2015 election, in part because of policy measures to address inequality, PAP realism as a strategy revealed its strengths and limits. The WP, though by a small margin, held on to its GRC in Aljunied. It also held on to its decades-old stronghold in Hougang SMC but lost the Punggol East SMC it had won in the 2013 by-election.

Just as the PAP adjusts its policies to maintain its hegemony, opposition parties adjust their party positions, while keeping to the ambit set by PAP realism. In an interview published in 2017 in the WP’s 60th anniversary commemorative book Walking with Singapore, Low said, “I think we have managed to build a foundation of people for the party to take another step, or to evolve into the next stage of forming a potential alternative government”.

In what I have emboldened from the quote, you can see the weight given to hedging one’s political ambitions against alienating voters who value PAP governance. In 2019, a year after taking over from Low as WP’s secretary-general, Singh gave a similarly sober vision of the future, saying the party is aiming to contest and win one-third of seats in parliament in the medium term.

The goal was strategic, since one-third of seats would mean the PAP would not have the ability it now has to change the constitution at will, while remaining the ruling party. The timeline for the medium-term target was not specified. It is safe to say, though, that it extends beyond the upcoming election.

For its calibrated approach, the WP has been called “PAP-lite” by critics. Its record in increasing its parliamentary presence over the years, though, speaks for itself. 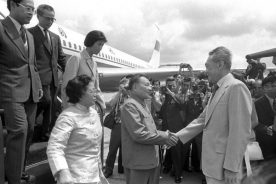 If the WP were to lose its hard-earned GRC, though, it would reveal an aporia within PAP realism as campaign strategy: it would signal not only the implicit point that there is as yet no alternative to the PAP, but also that there is no lasting movement to believe or seek in that direction.

In fact, even if the WP were to hold on to what it already has—one GRC and one SMC—this would still signal a standstill and recapitulation of PAP dominance and the PAP realist horizon of zero political parallel.

Here, PAP realism can be seen beyond the terms of election strategising and also as the stubborn blinker on political aspirations and counter-hegemonic resolve.

With the coronavirus outbreak dominating the new cycle and the PAP predicted to be validated at the polls for its generally excellent response thus far, it could be argued that the upcoming election, if held in the next few months, would be an exceptional one.

Would voters’ appraisal of the opposition be tempered by this, excepting any extraordinary screw-up by the PAP that would turn the tide?

Perhaps. One area of political contestation that has opened up is over the regulation (or lack thereof) of migrant worker dormitories, with a report by The Straits Times on 6 April describing the cramped and unsanitary living conditions in one of two dormitories that have been designated as isolation areas because of infection clusters.

As this situation develops, it should be noted, though, that the PAP government on the whole still represents a trusted custodian, especially when set in relief by world trends and the endorsement of its “all-of-government” approach by the World Health Organisation.

Outbreaks like the coronavirus are predicted to be the tip of the iceberg with global health inequalities revealing themselves and many other governments proving inadequate in formulating and acting on contingency plans.

The resulting sense of existential terror is likely to magnify as extreme weather becomes more common and leaders around the world continue to renege on their responsibility to curb carbon-intensive industries. Such a world of diminishing possibilities would amplify state-propagated narratives of Singapore’s vulnerability as a small nation.

Such narratives have served as a reliable ideological resource for the PAP because it has been able to consistently stand as the all-powerful guarantor of security and stability for citizens. The general consciousness of a more endangered world would likely mean a quickened flight to safety for undecided voters—to the PAP.

In turn, this would entail the sidelining of oppositional voices and, potentially, the exhaustion of imagination and investment in alternative political realities, at least in the realm of electoral politics.

PAP realism, which is already accepted as the state of play of oppositional action, would be further reified by the strictures of national emergency.

An opposition wipeout would be the least of voters’ concerns.