Playing the marriage card in Indonesia

If they follow the letter of the law, most adult Indonesians will carry a collection of identification documents. The primary one is the ID card or KTP (Kartu Tanda Penduduk), and a substantial number also carry driver licences. On top of these, people also carry taxpayer’s cards (NPWP), health insurance cards, and social security cards. Households are also meant to keep a Family Card (Kartu Keluarga). Jokowi, during his campaign for election in 2014, promised various social protection programs, primarily directed to the poor. Such is the strength of the link between official documentation and citizenship in Indonesia that prop cards for health insurance and cash transfers, with catchy names, became his campaign symbols.

So with Indonesians’ wallets already bursting with state-issued documentation, a growing debate is currently brewing questioning the purpose of a proposed “marriage card” for newlywed Muslim couples. Religion Minister Lukman Saifuddin has explained that the card is part of his ministry’s launch of SIMKAH, a digital information management system on marriage for Muslim citizens. All Muslim couples will have their marriages registered in SIMKAH and each person will be issued with a marriage card and marriage book. The launch of SIMKAH may seem a novelty, but the database has actually been around for at least six years. The marriage card is the latest added function to the system, which is already used to produce the marriage books Indonesians are issued with when they register their marriages. There have been previous attempts by the government to synchronise SIMKAH with other government databases, primarily SIAK, the national identification management system, in which the Ministry of Home Affairs stores individuals’ data and biometrics, and registers their events such as births and deaths. (SIAK also registers the marriages of non-Muslim citizens.) Each registered individual is also given a unique identity number called NIK (Nomor Induk Kependudukan), and for those who are 17 years old above or married, an e-KTP is issued. NIK is expected to serve as an identifier to forge communication between all of these different databases. Until now, however, interconnectivity between SIMKAH and SIAK is still at pilot phase, for several reasons. Some of these include differences in operating systems between the two systems and the fact that not all local religious offices (Kantor Urusan Agama) are connected to SIMKAH. The disconnect between the Muslim marriage database and SIAK has resulted in inaccurate marriage statistics.

The minister argues that the marriage card is more practical to carry than a marriage book. However, this raises the question of why one should carry a marriage book daily everywhere. A member of parliament suppors the card reasoned that this would make it easy for people to apply for a bank loan or to apply for a passport—two things that are not part of normal daily life. Indeed, it’s hard to imagine the life of a citizen where she is requested to provide proof of her marital status on a daily basis. As some people have pointed out, the e-KTP already displays a person’s marital status.

The ostensible reasoning for the ministry’s introduction of the marriage card is flimsy. So what might really be motivating the program?

I believe that the marriage card proposal represents part of an ongoing government effort to surveil Indonesian citizens. National security concerns were reportedly behind the introduction of NIK and e-KTP systems, and an update of SIAK in 2010. Through this massive investment in digital identification systems, the government attempted to construct a system that would enable comprehensive individual identification and monitoring. However, due to corruption and bureaucratic mismanagement, the modernisation of the SIAK and e-KTP have failed to deliver their full interconnectivity and surveillance capabilities.

The marriage card, in its basic function, mimics the mechanics of e-KTP: the card will display a barcode that can be read using a barcode scanner to show an individual’s marital information—including their spouse’s name and photo and their wedding date. Indeed, although we still have to wait to see its implementation, the story of the e-KTP program can provide some useful lessons, as it promised many of the same functions as are proposed for the marriage card. Far from being used as a digital identification, the e-KTP continues to serve just as an ordinary KTP—a physical card that displays specific biographical information. An e-KTP scanner is still a rare sight, which one typically only finds in civil registration offices.

It’s also hard to ignore the moral motives underpinning the program. One official reasoned that the marriage card would prevent people from having marital affairs or falsifying their marital status to marry another person. The minister has provided the same line of reasoning, by saying that the marriage card is a response to the government’s concerns about the increasing number of divorce cases.

One feature of the marriage card that is absent in the KTP is the name and the picture of the holder’s spouse. One would be hard pressed to explain the legitimate use of that information in the daily life of an ordinary citizen in Indonesia—but it will come handy when people want to stay in one of Indonesia’s Syari’ hotels with their legitimate spouse, as suggested by the vice president. The marriage card could also be used to defend oneself when being accused of sexual affairs or cohabitation (or in Bireuen regency in Aceh, simply having coffee with somebody of a different sex who is not one’s spouse.)

Proposed changes to Indonesia’s criminal code (KUHP) raise the stakes further. Although deliberations over the proposed revision are now paused in parliament, an article that criminalises extramarital sexual relations hasn’t been removed from the draft bill. It is not far-fetched to think that what we are seeing here is a bureaucratic move to prepare the administrative paraphernalia for the enforcement of a ban on extramarital sex.

It is not clear where barcode scanners for marriage cards will be installed, or who would have the authority to use them. But even without barcode scanner, it will still be easier for public and private facilities to demand proof of marriage under the pretence of avoiding immoral or criminal behaviour. Even more worrying is the way the marriage card will embolden and facilitate conservative groups in carrying out witch hunts targeted at people whom they accuse of compromised morality. 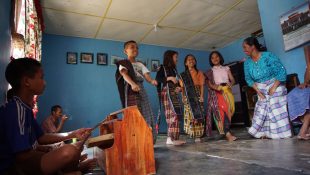 Lastly, the marriage card debate takes the attention away from the state of marriage registration itself in Indonesia. A survey conducted in 2013 estimated that less than half of marriages among the poorest 30% of households are registered. Without their parent’s marriage registration, 75% of the children from these couples do not have a birth certificate, meaning that these children will have difficulties accessing basic services such as formal education and interacting with the juvenile justice system.

Geographical distance, associated costs, and a lack of information about the process are the major reasons for couples not to register their marriage. The bureaucratic hurdles faced by a couple who undertake an adat or customary marriage are almost impossible to overcome. Furthermore, the process of late marriage registration takes a massive investment of time, effort, and money—both from the couple and from the state, as it involves at least two government institutions: the Religious Court and the Ministry of Religious Affairs.

Although the government is quick to dismiss the financial cost of the marriage card, the money for this unproductive project is still a valuable resource that would be better spent in helping millions of Indonesians to register their marriages. Not only it is redundant, offering no real technical benefit, but the marriage card carries a huge risk of being misappropriated to probe into people’s private spheres.