It’s one of the biggest Asian Studies conferences around, and it’s coming to Sydney. This week, PoP takes a (completely partial!) look at the best Southeast Asia papers to see and hear at next month’s Asian Studies Association of Australia conference at the University of Sydney.

Co-organised by the Sydney Southeast Asia Centre, the China Studies Centre and the School of Languages and Cultures, the 2018 biennial conference of the Asian Studies Association of Australia will be held at the University of Sydney from 3 to 5 July. Bringing together almost 1,000 academics with a shared interest in Asia, this is slated to be the biggest ASAA conference ever.

If you are lucky enough to be attending then we have prepared this handy guide about the best papers and brightest presenters – with a strong bias towards PoP’s preference for all things Southeast Asia, historical, performative, museological and archaeological, of course!

And if this sparks your interest, it’s not too late to register (though you have missed the deadline for a groovy lanyard).

Let’s get the obvious ones out of the way first. PoP has a strong showing at the conference, with each member presenting a paper. Rather than putting together our own panel as we did for EuroSEAS, we have instead adopted a strategy of divide and conquer.

PoP’s textual historian, Wayan Jarrah Sastrawan, has convened a panel on Textual Histories of Premodern Asia. Featuring Helen Creese (“The Destruction of the World: Indigenous Perspectives on the Dutch Colonial Conquest of Bali”), Peter Worsley (“The Rhetoric of Paintings: Rituals and Balinese Painting in the Late 19th and Early 20th Centuries”) and Jin Yoo (“Rereading the Texts of a Blind Botanist: Georg Everhard Rumphius and his Intermediaries”), this is one not to be missed. Jarrah himself will be talking about some of his doctoral research, “Historical Practices in the Premodern Indian Ocean World”. The Indian Ocean world in the 16th century, from an Italian portolano. Source: British Library

Our resident archaeologist, Michael Leadbetter, has also convened a panel, Material Culture in Asia: Innovative and Critical Approaches. Michael’s paper on “Disruptive Materiality: Testing Southeast Asian Historical Narrative and Cultural Assumptions with Archaeology” promises to showcase some of his big ideas. He is joined by fellow archaeologist Lorraine Leung (“A Scientific Approach to Chinese Tradeware Porcelain from Southeast Asia”) and Asian Studies specialist Matthew Stavros (“From Angkor to Kyoto: How the Hindu-Buddhist Kingship of Southeast Asia Influenced Premodern Japan”).

Next up is Nienyuan Cheng, our performance studies expert with a penchant for all things Singapore. Her paper is part of a panel on Asian Studies and Historiographies. Nien is one of the best public speakers around, and her presentation on “The Storytelling State: Oral History as Performance in Singapore” promises some impressive insights. She is joined by Anthony Reid, who needs no introduction (“Southeast Asian Studies Around the World: Semi-autobiographical Reflections on a Changing Target”), Francisco Jayme Paolo Guiang (“History as Social Criticism”) and Lisa Yoshikawa (“Asian Studies in the Anthropocene”).

Finally, I am presenting a paper on “The Largest Museum in the World: Underwater Cultural Heritage in Asia” in the History and Heritage panel. I am looking at how museums display underwater cultural heritage in Indonesia, Singapore and China (I know, I know, it’s not Southeast Asia, but I can’t go past the Nanhai One!). I’ll be joined by Bob Hudson (“Applying for UNESCO World Heritage Status for Mrauk-U, Rakhine State, Myanmar”) and Wu-Wei Chen (“Digital Narrative for World Heritage Site: Dazu Rock Carvings as Example”). PoP’s ambassador at large, Sony Karsono, will be presenting a paper on “The Urban Experience in Late New Order Indonesia through Poetry, Sculptures and Plays”.

Siobhan Campbell (“Portraits of the Nation: Indonesian Art on the International Stage”) will look at Indonesian art shown internationally in the period 1950 to 1965, with a focus on the portraits selected to represent the young nation.

For a historian, much of David Reeve’s current work is quite… current! He is an engaging speaker, and we will be keen to hear his take on Indonesian pop culture in his paper on “The Diasporic Imagination in Recent Indonesian Popular Novels and Films”.

PoP’s favourite PhD supervisor, Adrian Vickers, will chair a panel on The Humanities in Asia: Visual and Literary Perspectives. Adrian is speaking about “From Philology to Visual Cultures via Digital Humanities”, and will be joined by Hélène Njoto (“The Impact of Foreign Communities on Javanese Urban and Architectural History”). Steve Dodds’ paper on “Sniper Perspectives: The 2010 Wat Pathum Massacre and the Thai King-image Spectacle” also promises to be of interest.

Adrian Vickers is also convening a panel on Bali: The Show Goes On, which will feature a paper by I Nyoman Darma Putra on “The 1963 ‘Eka Dasa Rudra’ Ceremony and the Eruption of Mount Agung in Balinese Literature.” Volcanic eruptions, ceremony and manuscripts – I am sure a few of the PoP crowd will be at this one!

Another highlight will be Leonard Andaya’s panel, Historical Perspectives on Rivers in Southeast Asia. Andaya’s paper on “A Nineteenth Century Biography of the Kapuas River in Borneo” brings a popular concept in material culture studies – thinking about objects as having lives – and applies it to Indonesia’s longest river. I am also looking forward to Avijit Gupta’s paper on the geographical forces shaping “Rivers and People in Southeast Asia”.

Hans Pols’ paper (“Physicians in colonial Indonesia: Opposing the Colonial State, Imagining Independent Indonesia”) anticipates his new book, Nurturing Indonesia. And just a heads-up that PoP will be publishing a review of this new book in a few months!

Sophie Chao’s paper, “There Are No Straight Lines in Nature: Maps as Cultural Resource and Tool for Advocacy in West Papua”, also looks fascinating.

Kaori Fushiki looks at Indonesian Wayang Potehi (a form of puppet theatre that had been brought and continued in Chinese / Hokkien diaspora societies in Southeast Asia ) to examine how its practice was affected during the New Order era.

Also check out Lily Yulianti-Farid (“History, Contemporary Art & Cultural Projects: Indonesian and Australian Artists’ Collaboration”), who will look at the contemporary art and cultural linkages between Australia and Indonesia – linkages that were inspired by the early contact and historical relationship between Indigenous people of northern Australia and Macassan (Makassan) seafarers in the 17th century. More please! As usual, these picks have so far been skewed towards Indonesia, but I can assure you that there is plenty on offer for those of you who are interested in historical perspectives on the rest of Southeast Asia.

Mark Allon will be speaking about “The Kuthodaw Pagoda in Mandalay and its Marble-stelae Recension of the Pali Buddhist Canon Between 1860-1868”.

Deepshikha Boro (“Siam Made in France”) will look at the images, ideas, and identity of Siam (modern day Thailand) in French discourse through their contact in the seventeenth century.

Adam Clulow’s paper on “The Great Asian Deerskin Boom: Trade and Violence across Early Modern Asia” brings Southeast Asia and Japan together in a discussion about how the trade in deerskin connected and transformed early modern Asia.

In keeping with the conference theme, Beyond Area Studies, Andrea Acri’s paper (“Beyond Nations and Areas: Monsoon Asia as a geoenvironmental region and sociospatial grouping”) proposes to ‘reconceptualise and reimagine the geopolitical configurations of Asia as framed by the current Area Studies paradigm by widening the geo-historical framework through which the complex mosaic of cultural phenomena is linked.’

John Swinbank’s paper (“The Art of War: The Role of Vietnamese Visual Communications in the Vietnam Wars, 1945-1975”) examines the messages used to mobilize popular support during the Vietnam Wars and argues that the ’art of these messages from the past’ can tell us about how propaganda uses art and vice versa.

Yvonne Low will present a paper on “Colouring the State: Singapore, Contemporary Art and the Making of a Global City of the Arts”, focusing on the Singapore Art Museum. Low argues that the city-state has embraced its role as a new patron of Contemporary Art, and that this is part of the government’s strategy to convert Singapore into a global city for the arts.

Of course, it wouldn’t be a conference on Asia without a Mandala. Preeyaporn Kantala (“The Relationship between House of Champassak and Siamese Government in the Mid-19th Century”) will give a paper on ‘the transition of the inter-state relations under the Mandala system in mainland Southeast Asia in the mid-19th century’.

Zomia enthusiasts are spoilt for choice, with an entire stream of panels dedicated to the topic. Of these, one I am particularly keen to hear is Paul Sidwell’s “Two-way Traffic: Austroasiatics in Zomia”, which promises to argue against ‘simplistic dichotomous characterization[s] of history in favour of a much deeper story’. Sidwell proposes that these highland societies historically engaged with the outside world, taking advantage of the benefits that this traffic provided.

Although not related to Southeast Asia, I will be dropping in to hear Virien Chopra’s paper “Utterly Butterly Iconic: A Study of an Indian Milk Brand Mascot” simply because it just sounds so utterly, butterly irresistible.

And for film buffs, ASAA will also hold several screenings of acclaimed films and documentaries. Don’t miss, for instance, Tan Pin Pin’s critically successful “In time to come” (2017), a haunting and immersive documentary about the opening of a time capsule amid Singapore’s jubilant 50th birthday celebrations. Tan Pin Pin is one of the most ambitious and thoughtful directors in Singaporean film history. The film has been described as “eerily beautiful” by Slate Magazine, and the screening will be facilitated by Nien of PoP. Nien will also write a review of this film, to be published in New Mandala, but if you’re in Sydney this is a rare chance to experience Tan’s work.

If you can’t make it to the ASAA conference in July, you can still hear some of these fantastic papers at the mini Postgraduate Conference on 18 June. This is a dress rehearsal of sorts for postgraduates working on Southeast Asia and presenting at the ASAA Conference. Hope to see you there. 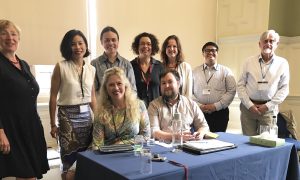 PoP goes to EuroSEAS to present on ritual in Southeast Asia 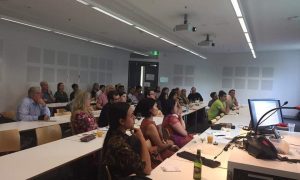