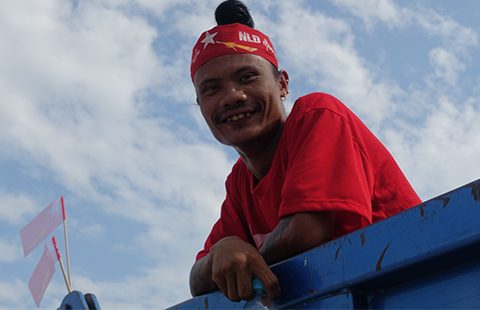 Red and green rallies and the vote

Colourful rallies and a solidarity in hope set the scene for Myanmar’s election.

Set behind Naypyitaw’s Gems Museum, a rally of around 2,000 National League for Democracy supporters converged in Zabuthiri – one of Naypyitaw’s eight townships – Tuesday.

As expected, the crowd was awash with red, with participants bedecked with arm-bands, head wear, stickers and t-shirts.

There was plenty of hype and excitement. Myanmar-decibel music blared in the foreground. What was pumping out of the speakers sounded like the tortured strings plucked and strummed on traditional handheld instruments that had been put through an electric blender.

Older rally-goers swished to traditional tunes, while the younger ones bopped to more ‘funked’ out beats.

“We don’t mind. The army is very dangerous. They have caused our country to suffer.”

Another said: “We have so many natural resources, but we’re so poor. Look around us, look at this market. Our economy is so bad.”

I asked him, what happens if the NLD doesn’t win?

“There is no doubt the NLD will win.”

Over at the Union Solidarity Development Party headquarters, President Thein Sein stands tall on a billboard.

Despite numerous claims of electoral violation in Naypyitaw, that political rallies are taking place in the capital are truly momentous.

Down in Yangon, the NLD is pushing for candidates to carry out door-to-door campaigning. In Naypyitaw, it’s a different story.

The Union Election Commission has banned door-to-door campaigning banned in parts of Naypyitaw. The Commission claims that such campaign strategies could lead to disunity among government officials. How will these passionate NLD supporting Naypyitawrians reconcile the next term, if their party doesn’t win? Could there be disunity between officials after the vote? It’s unlikely.

After 8 November, it will be fascinating to see how the capital in Naypyitaw will take shape in the next era of Myanmar’s political development.

Regardless of who wins the election, it seems everyone is united on political reform – no matter which colour they pin to the mast.

Check out a selection of photos from Tuesday’s NLD rally in the gallery below.