Religion is the opiate of the masses

Heralded by a truck of dancing teens singing about their love of Jesus, a few thousand people marched through Siam Square early this evening [Sunday 15 November]. Smiling for cameras, including the one held by this observer, they blocked one full lane of traffic headed towards Phloenchit Road. What made their demonstration intriguing is that they carried signs with Christianity-inspired calls for compassion and the Thai national flag and yellow and blue royal emblem flags. They were clad in a mix of ubiquitous pink and white royal emblem polo shirts and t-shirts with religious messages such as “God Bless You.” When asked what kind of movement they were, three different members of the demonstration responded: “Christian movement.” Yet their use of the royal symbols presents a question: did they carry the royal symbols as an extra measure of safety as they riled traffic police feathers and inconvenienced Sunday afternoon shoppers? Or was there another message? 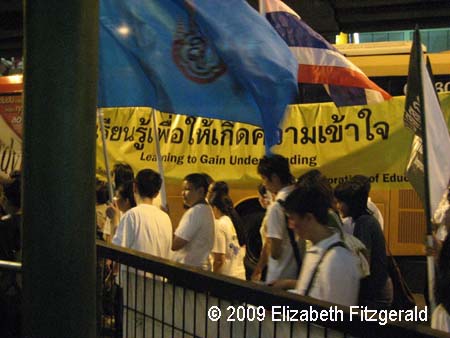