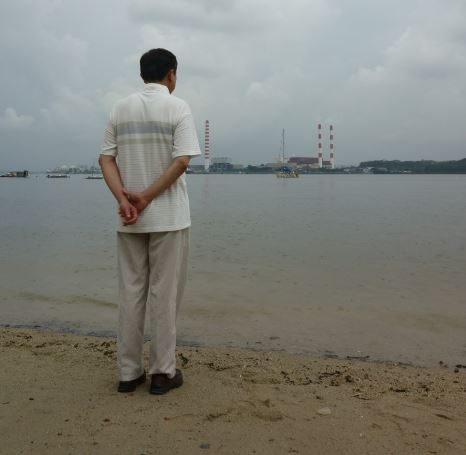 Review: To Singapore, with Love To Singapore, with Love

Sitting on a porch in Kuala Lumpur, Dr. Ang Swee Chai recalls that in 1977, when her husband Francis Khoo’s arrest was imminent, she had suggested that they get married – “that way I could at least visit him in jail”. Soon after their swift wedding, amidst threat of arrest and indefinite incarceration, they fled Singapore. Decades later, reality loomed. “It dawned on me that I was going to die alone in London… I want to be in 100A Upper Serangoon Road,” she says softly. Swee Chai has returned to Singapore just once – on a single-entry permit, carrying her husband’s ashes.

The men and women in Tan Pin Pin’s To Singapore, with Love are courteous in their painful recounting of the circumstances that forced them to leave their country of birth – four, maybe five decades ago. They instantly remember their dates of departure – long ago now. Their stories are factual, fragile and yet wistful. A lifetime of pent up yearning and loss has surprisingly not left them despondent. The grace and detail of their spirited, candid narratives taped conversationally at home, on streets and in offices, make this film intimate and engaging. True to Ms. Pin’s oeuvre, there are no gratuitous mood shots in this film; superfluous music is not necessary to pull at our heartstrings – the clear, penetrating words suffice.

“I knew that they had to get rid of me,” says the professorial, Oxford educated lawyer Tan Wah Piow, in a matter-of fact tone. He left Singapore after serving a jail term of one-year for blowing the whistle on what what he perceived as gross labour injustice. During that time he saw the forcible and complete dismantling of the university student union he had been an integral part of.

“You can’t buy it here, but you can cook it yourself. It’s partly how to cope when you are abroad,” ruminates Ho Juan Thai while frying Kuey Teow in his London kitchen. In 1976, known for advocating against the switch from the vernacular to English in public schools, he was persecuted as a ‘Chinese chauvinist’ – i.e. a communist. Ho Juan left Singapore before being incarcerated, and received political asylum in the UK. His dream of having his British-born son become a Singaporean citizen was dashed when he was told that he did not meet the legal criteria. “I don’t know why Singapore has to isolate people like myself who have such a strong sense of belonging,” he says, his voice cracking. He watches his family celebrate his mother’s 94th birthday on a Skype connection from a hotel room just across the border, in Johor Bahru.

To Singapore with Love is divided into testimonials from two categories of exiles – those that escaped during the purported communist crackdown of Operation Coldstore in 1963, and others who left during the mid-to-late 1970s when the government began to clamp down on student agitators. The younger exiles are interviewed in London, the elder in Thailand. While the film constantly shuttles between these locations – London, Thailand, and sometimes Malaysia, this does not jostle the narrative flow. The characters are fluidly connected by a common ethos: they are men and women who were castigated, hunted and eventually ostracized for being outliers to the fledgling PAP government’s vision of a dissent-free Singapore. Indeed, when we leave Wah Piow strolling outside his law office in London, to hear from Tan Hee Kim on the warmer streets of Hat Yai in Thailand, the geography, though incongruent, almost doesn’t matter. Here we are drawn into the story of an elderly couple that had split from the PAP in 1961 and joined the new, hastily convened left wing Barisan Sosialis party. In 1963, under heavy threat, they fled for Malaya where the Malayan Communist Party (MCP) took them in. The bitter irony, as recounted by Tan Hee Kim, was that during the Japanese interregnum they had been asked to assist the colonial government in securing Malaya. But in the aftermath of colonialism, as the new and independent nation was being negotiated, they found themselves on the wrong side of the dominant ideology and were eventually forced to become stateless.

Whether these octogenarians living in Thailand are committed life-long communists is a moot issue today. What cuts across both groups is that these ex-citizens felt that they had a rightful say in the future direction of the nascent nation. In 1989 when the peace treaty with the Communist Party of Malaya in Thailand was executed, those interviewed in the film express that they had wished for rehabilitation as citizens. The Singaporean government however, had asked them to appear on television to renounce their beliefs, their community and their lifelong colleagues. Such an extreme position they felt was an affront to their basic dignity; it was incompatible with the ideals of a democracy. Refusing, they opted to spend their days in Thailand.

These aging men and women, in Europe and in Asia, have mechanisms to cope with their exile. Dr. Ang Swee Chai threw her efforts into a NGO for medical treatment of Palestinian refugees. Tan Wah Piow still practices law and writes books attempting to clarify that era of repressed history. In Thailand, Ye Wanzhen and her husband Tan He Kim, operate a noodle business and have each other to reminisce with – they are avid readers of every shard of political news. He Jin and Shu Shihua seek solace in displaying their cherished photo album of life when they lived in camp.

Swee Chai visits Malaysia on occasion where she meets family, old colleagues, and friends to discusses the ramifications of their past struggles on the emerging generation. An elderly lady, entering the age of retirement, she still physically remains outside of a nation she loved so much. She says ruefully over images of the hyper-modern Singaporean cityscape seen from the Johor Bahru causeway, “Maybe there is an attitude that my generation did not fight hard enough to bring democracy and freedom to Singapore. But I can tell you some of us did. Whether we failed or not is not the point. But we did try.” Regrettably, most Singaporeans will not get to hear the testimonials from this rapidly aging generation of exiles.

The Singaporean Media Development Authority (MDA) has unfortunately banned public screenings of this rare, thoughtful film – a project attempting to piece together the nation’s complex transition to statehood. State formation in much of post-colonial Asia was a bloody mess – an era of brutal jockeying for power that broke the backs of many political parties. But the continuing excommunication of political nemeses might have grave repercussions on the democratic morale of a society. A stable, rich nation, approaching a bi-centennial anniversary could have the largesse to allow its citizens to explore that fundamental question – Who are Singaporeans? As director Tan Pin Pin herself said pithily, “We need to be trusted to be able to find the answers to questions about ourselves.”