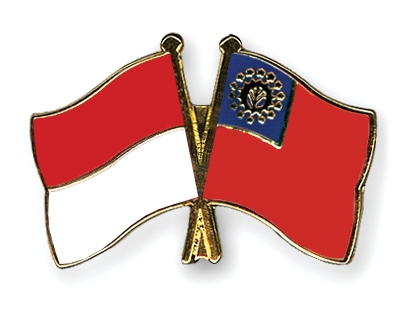 The relationship between the governments of Indonesia and Burma is the subject of only occasional scrutiny.

But it is one of the bilateral tie-ups in Southeast Asia that, on a personal level, I strive to know more about. So I was excited to see the special feature published in The Myanmar Times to mark the 60th anniversary of diplomatic relations between the two countries. Such commemorative lift-outs are a standard way of marking major milestones across Southeast Asia. It is only fitting that the Indonesian Embassy made the effort to produce this feature. For those with the time and inclination the PDF version is available here.

There are a few things worthy of comment but I particularly liked the article by Indonesian Ambassador Sebastianus Sumarsono. He gives his take on the bilateral relationship and, towards the end of his piece, notes that during a previous celebration in December 2009:

I was honored to present a song that I personally wrote entitled “Membangun Persahabatan” or “To Build A Friendship” which was performed both in Bahasa Indonesia and Myanmar language by a joint choir. The song is about the historical similarities that Indonesia and Myanmar have. Even though both countries have their own diversities, with many different ethnics, Myanmar have 135 ethnics and Indonesia have more than 250 ethnics, but both are able to build a strong and dignified state.

Now, I appreciate that in diplomatic circles this would pass without comment. It is couched in the friendly terms of a relationship where much goes unspoken, at least in public. But the history of these countries, especially when we take some comparative perspective, is clearly not so straightforward. Indeed, the defining characteristic of Burma’s ethnic diversity over the past 60 or more years has been civil war. Similarly, Indonesia has faced its share of sub-national rebellions going right back into the mists of time.

But the point seems to be that “strong and dignified” states have now emerged.

Indonesia certainly has a robust claim on those grounds. But what about Burma? Should we take the Ambassador’s reflections literally? Or is there something else about the notion of being “strong and dignified”, when it comes to two of Southeast Asia’s most important countries, that we need to bear in mind? And when we start to more seriously compare Indonesia and Burma, what do we find?

Thoughts from New Mandala readers on these questions, or on other aspects of the Indonesia-Burma relationship, are, as always, very welcome.