Rocking and rapping the Karen diaspora 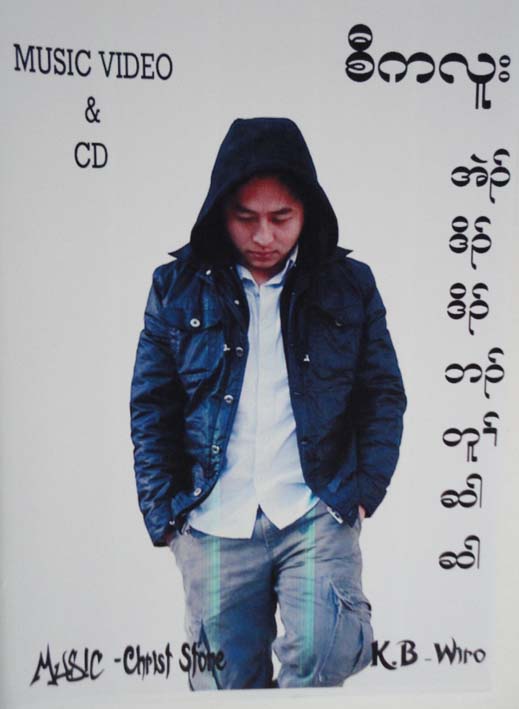 Give Me Another Chance is the first full-length album of music videos from Sydney-based rapper Eh Law Saw. Big Love, Big Suffering is the first album by Melbourne-based singer/songwriter Saw Kalu, released as an audio CD with accompanying VCD of karoke videos. Both albums are the product of young refugees who arrived in Australia from Thai border camps and their work provides an insight into Karen diasporic youth culture. The singers are S’gaw Karen with Christian backgrounds and they sing in S’gaw language. Give Me Another Chance is hip-hop while Big Love, Big Suffering fits into pop and rock genres.

Love is a key theme in both albums – with songs about break-ups, courtship and relationships. They also intersperse these with messages about the Karen ethno-nationalist struggle, urging young Karen in the diaspora to uphold an ethnic identity and to do something for the liberation movement. Saw Kalu takes up the cause to a fuller extent though, with four songs devoted to nationalist themes, while Eh Law Saw only has one, which he seems unenthusiastic to sing.

Saw Kalu’s first song is titled ‘I am Karen’ and carries an irritatingly didactic message. The song is in a hard rock style, with lots of energy, which is perhaps an attempt to motivate us into action. The clip consists of Saw Kalu and his band performing in rural Victoria, with the coast on the horizon. They use special effects to give a red tinge to the video, evoking a colour in the Karen flag, also associated with bravery. Saw Kalu asks Karen youth to question themselves and attempts to provide himself as a role model:

I am a Karen who loves honesty and I am a Karen who has red blood. Hey! Looking at me, I am a Karen who really loves his people. As a Karen, I will raise my Karen flag so others can know us and we’ll maintain Karen heritage given to us by our ancestors. I’m always prepared to do any duty given to me for the sake of my people. I’ll do it until I die.

This strong message brings up common themes from the Karen ethno-nationalist struggle, including sacrifice, bravery, unity and loyalty. This shows that this rhetoric continues to resonate amongst some diaspora youth.

The sole specifically nationalist song on Eh Law Saw’s album is titled ‘My People,’ written and co-rapped by Ban Nat. It speaks to young Karen dispersed around the world: “To every Karen who arrived in other countries, we should try hard in our studies, for us to be able to help our people. Our people need us.”

The song appeals for Karen unity: “We should defeat the SPDC (the acronym for Burma’s government) who oppress our people. There are not two Karen States – there is only one Karen State. To be able to get our country back, unity’s the most important factor. It’s the time for us to unite and work together.”

Interestingly, Ban Nat rather than Eh Law Saw is the driving force behind the song. In the opening scene to ‘My People,’ Eh Law Saw and Ban Nat are talking in an industrial car park:

Eh Law Saw: Hey kwa (brother)! Why did you come to Australia?

Pan Nat: Because our Karen people are being oppressed and we have to scatter and run for our lives to take refuge in other people’s countries. So, isn’t it good if we sing a song about our people?

Saw Kalu’s song ‘Young Karen’ carries a similar message that all young Karen should unite and work together to help Karen people. It reflects a common feeling of guilt within the diaspora as a result of living in relative comfort in the West while so many suffer back home. These sentiments are very familiar to me but it is interesting to see their transmission to a new generation. I realise that in the two sets of clips, the Karen ethno-nationalist movement is brought in to the music in different ways. Saw Kalu is much more directly focussed on political cause. Most of his songs are involve a narrow idea of ‘Karen,’ following a similar discourse that has run through S’gaw Christian-dominated Karen culture and politics since early colonial times. Eh Law Saw, in contrast, provides somewhat of an alternative that might resonate more strongly with diaspora youth. His nationalist message is on the most part, less direct – wearing Karen clothes in the occasional scene, rapping under a Karen flag, rapping in front of a graffitied wall or wearing a T-Shirt honouring assassinated Karen National Union leader Padoh Mahn Sha (pictured).

Interestingly, Eh Law Saw expresses a range of daily issues related to young Karen adapting to their new society. Some of the frustrations centre on youth caught between conservative and controlling parents who expect respect and obedience according to common interpretations of ‘Karen culture,’ and the desire to try new things, including drugs, hip hop and other elements of what they refer to as ‘on the road.’ These are grounded in his experience in working-class, suburban Sydney.

In ‘the Nature of Young People’ is about Karen youth who are rebellious and carefree, spending their time drinking ‘happy water,’ smoking cigarettes and marijuana. They hang out, wonder around the city at night, stay up late and get up late. They sing that this is a boy’s ‘nature’ in contrast with a girl’s ‘nature’ of dressing sexy, spending too much time in front of the mirror and chatting online and listening to K4L songs. The clip shows Eh Law Saw with a group of friends, hanging out in a park, standing by their car, playing around and drinking at a picnic table by gum trees.

‘Bad Boy’ also gives a new insight into life for Karen youth growing up in a big Western city. The song is about contradictions between what they are told at home and the reality ‘on the street.’ The song contrasts the moral messages of Karen parents, teachers and pastors, with the more gritty experiences of Eh Law Saw and his crew. While the message from elders is to rely on God, to stay away from drugs and alcohol and to study hard, those in the song want to use drugs, flirt with girls for fun and experiment. They therefore get called ‘bad boy’ in the conservative Karen community.

They respond to this in the song, rapping that it is their life and their mind and that their pastors and parents won’t change them. The song carries an ambiguous message. The rappers talk about coming back from prison, ostracised by their Karen elders. They wonder if it was right to be a ‘bad boy’ and if they should have listened to their parents. But then their conclusion is defiant, The closing line of the song goes ‘is this a time for me to repent? Shit! (I don’t want to do that).’ These are real issues – there are already some Karen in Australia who have been charged for the sorts of crimes Eh Law Saw is rapping about.

Saw Kalu and Eh Law Saw have quite different approaches to love. Saw Kalu seems to have internalised bitter experiences of love, which are reflected in all of his romantic songs. In one song, titled ‘Tear,’ he sings about heartbreak after a girl he loved broke up with him. He describes his feelings as ‘burning inside him.’ In the chorus, he sings that his tears and suffering as a sign of his love. In the clip, Saw Kalu is lying down. The camera zooms in on his face so we can see his suffering (pictured). This is interspersed with old photographs of him with his girlfriend. This suggests that the song is based on a real relationship, as opposed to the fictional ones that Eh Law Saw has come up with for his videos. In clips like ‘Tear,’ Saw Kalu sees love, like politics, as something that involves great sacrifice. ‘Tear’ concludes with a Christian message of forgiveness to his girlfriend for leaving him. There is therefore moral value in his loss.

Eh Law Saw’s concept of love is less serious: love me as I love you and if you don’t, I’ll take my love back and give it someone else. While Saw Kalu focuses on either being dumped or, in one song, experiencing the death of his lover, Eh Law Saw deals with a broader range of romantic topics. These include unrequited love; loving an older girl; loving a younger ‘baby’ girl; choosing to break up with his girlfriend; and having his girlfriend dump him.

Both artists use a number of female actors in their love-themed music videos. These largely carry a stereotypical image of Karen femininity. Girls pick flowers, stroll in parks, smile shyly and appear quiet. Eh Law Saw also includes stronger images of Karen girls who look assertive – in one clip a girl confronts a boy to tell him that she’s found another guy. Despite the stereotyped femininity, girls have power over boys – they seem in control of the relationships and are mostly the ones who decide when it’s time to break up.

Eh Law Saw seems more influenced by Burmese rap than the genre’s US origins. While musical style reflects a mix of both hip hop traditions, the lyrics and content are on the whole much closer to popular Burmese hip-hop with the preoccupation with romance, in a way fans of American rap would probably see as overly tame and polite. His closing song sounds like a reference to a popular Burmese rap song from Sai Sai Kham Lai with Joe Ja. Only songs like ‘Bad Boy’ and ‘the Nature of Young People’ seem closer to lyrics in US gangster rap – although content like this are presumably absent from Burma-based hip hop due to state censorship, which restricts expression on moral as well as political lines.

Saw Kalu’s uses a mix of pop and soft and hard rock with some piano. Saw Kalu sounds like he is primarily influenced by Burmese and Karen popular music, such as Iron Cross, Klo and Kweh.

Eh Law Saw is creative in word use and in exploring possibilities of making music in a new way – rather than following conventions commonly used in Karen popular music. He appears surprisingly confident in the way he challenges conservative Christian S’gaw Karen culture in multiple ways: by his use of ‘impolite’ colloquial S’gaw Karen, English (‘Bad Boy’ includes the line ‘I don’t give a fuck’), the inclusion of content challenging the authority of community elders and the open references to drug use, alcohol consumption and crime. However his sexual politics are perhaps more ‘traditional’ – the most intimate scenes are of young couples holding hands and walking together in parks, although in one of these songs, there is a subversive wink that suggests satirical intent.

I feel like Karen diasporic youth might better relate to Eh Law Saw than Saw Kalu, who is more like a lecturer with heavy moral and political messages that I suspect at least some in his intended audience are fed up with. While Saw Kalu is ‘more of the same,’ its exciting to see Eh Law Saw pushing multiple boundaries through his musical style and lyrics.