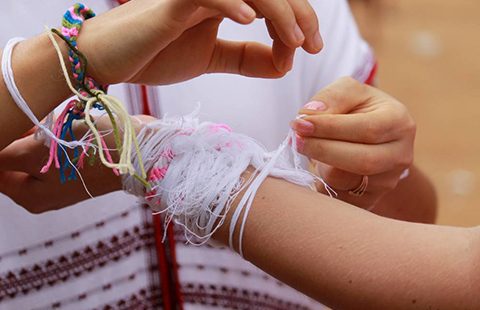 Karen politics and unity in the lead up to Myanmar’s historic elections.

In a carefully managed show of unity, Karen religious leaders from Buddhist, Baptist, Catholic and Lehkai communities gathered last August at the Taungalae monastery near Hpa’an, the Karen State capital.

They were there to lead the annual wrist-tying ceremony; a special occasion in the Karen cultural calendar at Taungalae, itself a well-known centre of Karen religious, political and educational life.

This was the first time Karen leaders from across different faith communities joined together with representatives from the Karen National Union (KNU) for the ceremony.

With Karen communities not confined to the southeast, but scattered across the country in Yangon Region, the Ayeyarwady Delta, parts of Mon State, Bago Region and Tanintharyi Region, Karen unity has proved as challenging and elusive as the KNU’s struggle to represent all Karen peoples.

Yet despite being seen by many as a largely Buddhist festival, this year’s event united Buddhist Pwo and Christian Sgaw-speaking Karen with other faith communities in commemorating the arrival of the earliest Karen settlers following their long and perilous journey from the Mongolian Steppe and across the Gobi desert to the Karen hills of present-day Myanmar. After the speeches, excited locals gathered for the wrist-tying itself where six ‘articles’ – bananas, two types of rice, garcinia fruit, water and sugar-cane – are presented and exchanged for a seventh article, a red and white cotton wrist band. It’s a mark of Karen identity that unites all wearers regardless of language or religion.

The articles are rich in symbolism. Take for instance garcinia, a small hard fruit prized for its sweet flavour and medicinal properties. As one student from the Taungalae Monastic Education School said:

It has several roots in one plant. They are too strong to remove and have the tolerance to exist over time. Therefore, our Karen nationals must have a strong desire and a firm resolution to maintain and cherish our national races, languages, religions, culture and literature.

As Karen people across the country look to forthcoming elections, such a show of unity in diversity would serve them well. With as many as six Karen political parties contesting the vote in Karen-populated areas, four of which are active in Karen State alone, a range of Karen political visions and aspirations compete for attention and support.

These visions often reflect different ethno-religious attachments and regional affiliations; the formation of some appears to mark the friction within others.

All these parties gained seats in the last election with the PSDP gaining the most with nine seats across state and national assemblies. A number of newly formed Karen parties have joined this uneasy dance including the Karen National Party (KNP) based in the Ayeyarwady delta region and Mon State. The Karen Unity and Democracy Party (KUDP) and the Karen Democratic Party (KDP), a Buddhist dominated party which was formed in a recent split with the PSDP, have also emerged in Karen State.

Policies remain unclear for many of these newer parties and candidates are inexperienced. Political positioning has been cause for conflict within the wider Karen community, most notably with the controversial decision of Naw Susanna Hla Hla Soe, Director of the Karen Women’s Empowerment Group (KWEG), to run on a National League for Democracy (NLD) ticket despite receiving overtures from both the KPP and KNP.

Naw Susanna maintains she is now well placed to represent Karen issues from the very heart of the country’s democratic opposition; others believe that her voice will be quickly stifled.

Disagreements not withstanding, at least three Karen parties have agreed to choreograph their engagement to some extent.

The KPP, the KSDDP and the KDP all signed an agreement last year not to run for the same constituency or seats in this election. Whilst the PSDP was a provisional signatory to the agreement it declined to join the alliance over a difference in policy alignment.

Even though there are lots of differences between Karen parties at a regional level, at the national level we can work closely together on issues of peace and decentralisation. We can also work closely with other ethnic parties pushing for greater federal integration for ethnic peoples in our Union of Myanmar.

Indeed, observers have suggested that the apparent disorder amounts to a deliberate strategy on the part of Karen politicians.

By exerting pressure on the government from alternative political positions these parties do not appear to pose a coordinated threat and so do not risk being divided by the formidable opposition ranged against them.

In a further example of strategic engagement, Karen civil society organisations have been collaborating and working closely with political parties for some time now. Many have been providing much needed voter education, particularly to remote communities, as well as facilitating election monitoring services throughout Karen-populated areas.

This colourful expression of Karen political engagement is a mark of the enthusiasm with which Karen parties and politicians are entering the election space; it is an indication of how ethnic politics is negotiating this space.

Whether Karen parties are several roots of one plant remains unclear at this stage.

But they are clearly united in their desire and resolution to push for change for Karen communities across the country.